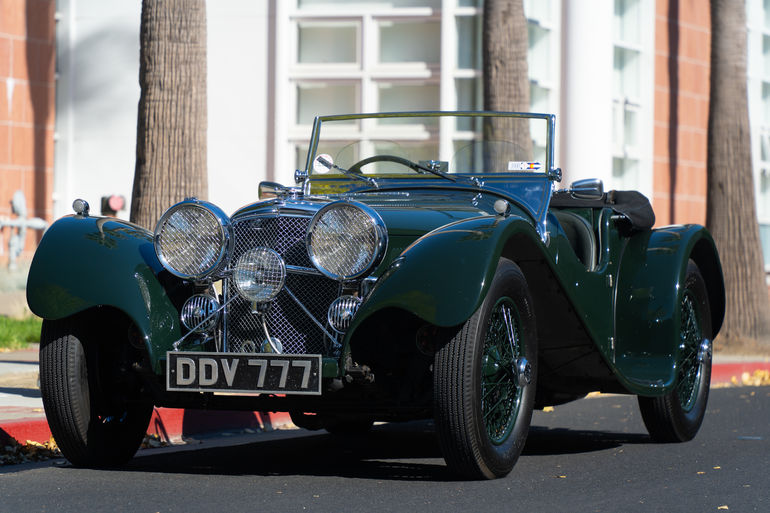 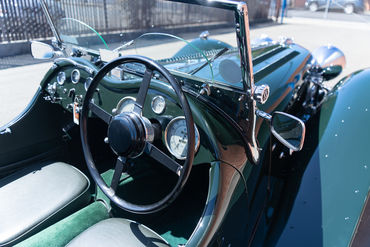 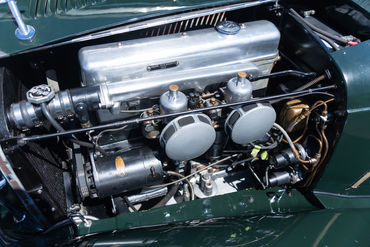 Considered by premier automotive enthusiasts and historians to be one of the most important British motorcars, the elegant and sporting SS100 was just the beginning for what would become one of the most important automotive marques in history. Though a fledgling company at inception, Jaguar evolved from humble beginnings as the modestly named Swallow Sidecar Company. Regarded as the first Jaguar sports car, the name SS, followed first by 90 and then by 100, were aptly named for the top speeds these cars could achieve. Distinctively produced with hand-crafted bodies, fitted with premier technology of the period, and tailored with fine materials, the first series 2.5-liter powered cars were capable performers, challenging top competitors Bentley and Alvis. Sales were brisk for the first series cars resulting in 198 built. In 1938, the engine was enlarged to 3.5 liters, putting out 125 bhp which greatly improved performance. The 3.5 series, coupled with a 4-speed gearbox (three with synchromesh), and Girling brakes, offered the remarkable combination of performance, durability, and style – features that would become synonymous with the Jaguar brand into the next century.

Among the rarest of the SS100 series, a mere 118 of the 3.5-liter SS100 were built, most of which remained in the UK. Conceived as one of the earliest refined and manageable sports cars, the SS100 evolved to deliver impressive performance competing handily with its grace and beauty traditionally found in higher priced European offerings. Consistently sought after by premier collectors who enjoy the charm and driving characteristics of prewar cars, the SS100 delivers superb driving manners, rarity, and coachbuilt beauty.

This wonderfully prepared matching number example, bearing serial number 39100, is also supported by the matching engine number stamped on the chassis tag and engine. With just 18 examples produced after this one was completed; this SS100 features the best attributes and refinements of this seminal series achieved during the final assembly of these unique hand-built cars. According to the current owner, shortly after delivery, #39100 participated in the 1939 Brighton Speed Trials and various other UK road races including the Scottish Rally. Thankfully preserved during the ravages of war, the car continued in that same vein, reportedly participating in additional European road rallies through the 1960s and 70s. By the 1990s #39100 had been imported to the United States where it reportedly raced in Midwest and Southern US vintage car events. Having benefited from a comprehensive restoration completed approximately fifteen years ago by Jaguar experts in the UK, the cosmetic and mechanical condition has been properly maintained by the current owner. The result of a seven-year search for a matching numbers example, the current owner purchased this car in 2006 and has enjoyed participating in several driving events including multiple year participation in the California Mille (2006-2016) and the Colorado Grand (2006-2015 and 2017). In 2015 the engine was comprehensively rebuilt by marque specialists and thoughtfully updated with a remote oil filter. Throughout the span of his ownership, #39100 has accumulated 8-10k miles, resulting in not only a very nicely prepared car, but one that has been mechanically sorted and proven in touring events.

Today the car makes a very strong visual impression, featuring smooth and glossy British Racing Green paint showing only minor areas in the painted finish where the restoration has mellowed over the years since completion. Handcrafted panels are properly finished with excellent fit to the body panel gaps. The finishes and body work have been done to high standards, but a few areas show edge wear and some stone chips in a few of the typical areas seen on cars that have been enjoyed. The hood louvers are very straight and properly aligned as are the beautifully tailored sweeping front fenders and delicate running board trim. The chrome is very good throughout, including the impressive large headlamps, stone guards, adjustable windscreen, elegant grille shell, and lunging Jaguar chrome mascot. The aforementioned front fender line has been beautifully articulated, rising at the peak of the front wheel, gently forming the running board area, and then quickly surrounding the rear wheels. The delicately bobbed rear end terminates slightly aft of the angled fuel tank and spare tire. The glass and lenses are in excellent condition as well as the convertible top and top boot. The purposeful and sporting wire wheels are painted to match the body color and finished with chrome plated dual eared knockoffs. The wheels are shod with period correct Excelsior tires, as is the rear mounted spare tire. The overall cosmetic impression of the car includes several standout touches such as proper grille and headlamp stone guards, a centrally mounted spot lamp, dual chrome plated horns, and a period correct front UK license plate. Of particular note, is the pivoting windscreen, which can be dropped forward for more exhilarating open-air motoring.

The interior presentation is consistent with the high quality of the exterior featuring green leather seats and door panels and matching green low pile carpeting. Showing some light relaxing to the driver’s seatback, the seats are very well done with correctly tailored perimeter seat piping. The remaining interior materials are taut and properly stitched, with correct details and fasteners, including the leather trimmed interior door panels. A pair of vintage competition style wide seatbelts have been fitted for safety. The overall impression of the interior is very well composed with just minor evidence of use in the driver’s footwell carpet, door pulls, and some steering wheel finish wear. The dashboard is finished in matching green and is in excellent condition sporting clear and vivid ivory dial faces with crisp nomenclature featuring the SS logo and fine chrome bezel trim. The starter button, now cracked from use, is still functional but would benefit from future replacement. Various accompanying brightwork and dash switches are handsomely restored contributing to the wonderful vintage sporting appearance offered in this SS100.

Lifting the louvered center-hinged hood, the diligently executed restoration reveals correct finishes and details reflective of cosmetic and mechanical authenticity. The engine has been properly detailed and cared for including attention to painted and polished components, correctly finished hoses and lines, properly spiraled lines, and polished aluminum castings. Various mechanical components are very clean throughout though here again showing signs of patina consistent with enjoyable use since the restoration was completed. The underside of the car remains clean and nicely maintained further reflecting the comprehensive restoration performed on the car roughly fifteen years ago. The mechanical components, accurate hardware, correctly fitted linkages, correct mounting bracketry, and correctly painted frame and suspension components are all hallmarks of the restoration quality, now showing finishes consistent with the 8-10k accumulated miles since the restoration was completed.

Engaging the starting procedure – a few switches and levers set right, the car turns over via a dashboard mounted starter button, gradually warming to a smooth idle, which can be adjusted using the fuel mixture settings inside the car. With the top down, visibility while driving is excellent. The low seating position delivers a wonderful view of the car with a commanding feel behind the long hood. The gears are easily engaged, owing to the synchromesh in all but first gear, which is prudently engaged at full stop. Braking is typical of the period though the added synchromesh gearbox can be more agilely used to modulate speed once underway. The performance offered by the 3.5-liter engine is surprising as it has good power and pulls strong, owing to the 2015 rebuild with break-in and modest miles accumulated since completion. The car tracks well on the road even at higher speeds, being surprisingly easy to maneuver even at slower speeds. Unlike heavier pre-war sports cars of this era, the SS100 is surprisingly lithe and eager. With the top down and outfitted with suitable driving gear (much of which are thoughtfully included as spares), highways or engaging side roads are comfortably enjoyed just as the current owner has found while completing many of his vintage touring events.

This SS100 is accompanied by a pair of vintage style Appret Lustre helmets and storage bags, a vintage style leather driving cap, side curtains and cases, a car cover and carry bag, misc. engine gaskets, a carrying case with various assorted roadside spare parts, and a Jaguar SS100 Instruction Book.

This is an excellent opportunity to acquire a rare, matching number 3.5-liter Jaguar SS 100 featuring a recently rebuilt engine, handsome finishes, and proven mechanicals. Rare in number and beautifully designed, the Jaguar that started it all delivers a legendary driving experience, sure to delight anyone who enjoys the pleasures of vintage motoring. 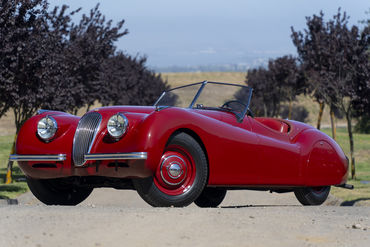