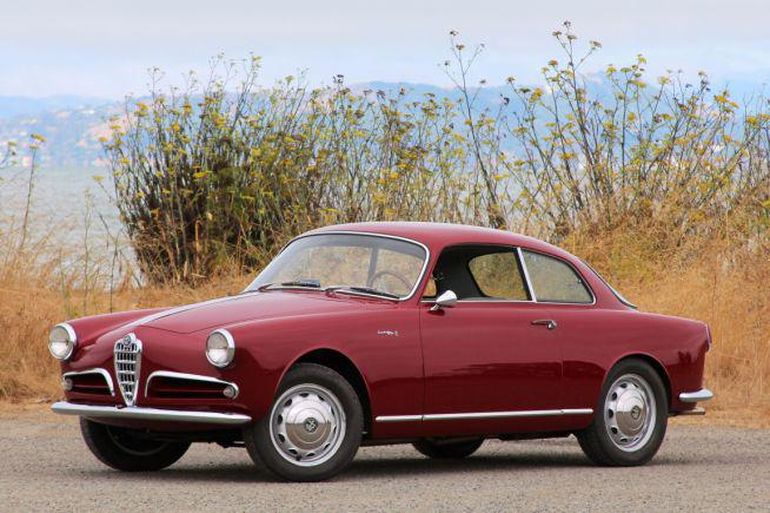 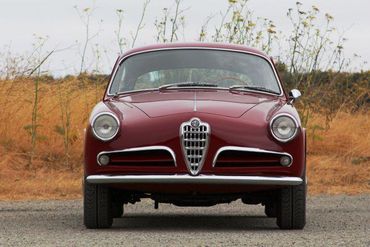 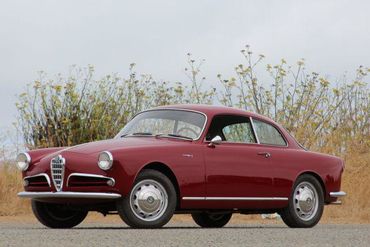 The Giulietta is the car that took Alfa Romeo from being a relatively small production company to being an economically viable and successful firm. Prior to that, they had produced large and expensive cars, and never in very large numbers. With the Giulietta, however, Alfa Romeo produced significant numbers of these charming and capable cars. Its success was due in part to its unique placement in the market. It was neither a large hugely expensive car, nor was it very small utility car (such as the Fiat 500). Instead, the Giulietta was affordable enough so that many could buy it, yet permitted a more glamorous and useful approach to motoring that really struck a chord with buyers on both sides of the Atlantic.

Unlike the “101 Series” car which followed, the early car such as this example were lighter, and had smaller head and tail light treatments. They were also equipped new with the very rare “tunnel case” 4-speed transmission- which while replaced with a 5-speed for ease of use- is included with the sale of this example. The ownership experience of an early production Giuliettas is further accentuated by their eligibility for prestigious pre-1957 road rally events, both here in the US as well as in Europe. Their all-weather friendly coupe configuration, and agile mechanical platform, lend themselves perfectly to use on these long distance events.

According to Marco Fazio at Alfa Romeo Storico, this particular matching numbers example was manufactured on February 9th 1956, and sold new through Hoffman Motor Car Co. of New York. By 1978, Doug Brown of Glendale, California owned this lovely Sprint, a relationship which lasted for over 25 years. He was aware of just two previous owners before him, both of whom were connected to the Jet Propulsion Lab in Pasadena, California. At the time of Brown’s purchase, the car was complete but showing signs of non-use. During the years of his stewardship he brought the car up to what he described at that time as show condition, selling the car in 2002. Paintwork was performed from bare metal, and once stripped; very little corrective work was needed prior to paint application (see photos in bare metal). The dark red shade employed is very attractive, and actually a Ferrari color. During Brown’s ownership he replaced the transmission with a 5-speed for modern day freeway traffic and at the same time rebuilt the differential. While the mileage was not well documented by previous owners, it was his belief that at the time of sale the odometer reading of 31,000 kilometers was probably just 131,000, substantiated by the condition of what is thought to be the original interior. Detailed records on file from Brown’s ownership (which go back to 1978) show careful and regular maintenance and an engine overhaul in 1979 at which time 108,200 kms were indicated.

David Nee of Pebble Beach, California purchased this Sprint from an interim owner in 2007 by way of a Gooding & Co. auction. During his ownership regular service and adjustment was carried out, as well as the rebuild of the generator (2011), wiper motor (2009), distributor and carburetors (2008), the fitment of a new wiring harness, fuel lines, soft brake lines, and stainless steel exhaust system (2007). After half a dozen years of ownership enjoyment, Fantasy Junction had the opportunity to handle the sale for Mr. Nee in 2013 to the present owner, based in the San Francisco Bay Area. In recent years he has performed a major brake system service, a four wheel alignment, and replaced the thermostat.

Today the car is operating well, and is a joy to drive. The engine starts easily and produces excellent power considering it is only 1300cc in displacement. The 5-speed transmission shifts well, and the brakes are effective. It would appear that the ancillaries are all functioning, and generally speaking, the car could be expected to complete a California Mille or similar event without significant mechanical works prior.

Cosmetically the car has a nice driver presentation. In 1992 the paint was done to very high standards, but is showing minor age and use marks on most panels at this time. The chrome is generally very nice, having been selectively re-plated, but not completely. Of particular note is the fitment of the grill and brows, which are excellent on this car, and correctly installed to the body gasket-free.

The interior is reported to be largely original, and presents nicely. A wood rimmed Moto-Lita aftermarket wheel is fitted, as is an auxiliary under dash ammeter. The original gauges are showing some yellowing, a common issue to these cars. The carpets where were replaced under Nee’s ownership are in very good order. The door panels are likely original and are very nice considering their age. A fire extinguisher is fitted behind the driver’s seat.

The engine bay and underside are mechanically and structurally tidy, and employing and nice driver presentation.

Alfas of this era are finally being widely appreciated as the genuine collectible sports cars that the true Alfisti have always known them to be. Accompanied by both its previously worn yellow California license plates, extra keys, workshop and technical manuals, the original 4-speed tunnel case gearbox, and records for the last three ownership periods dating back to 1978, this event eligible and charming early production Giulietta Sprint is sure to make its new custodian smile.