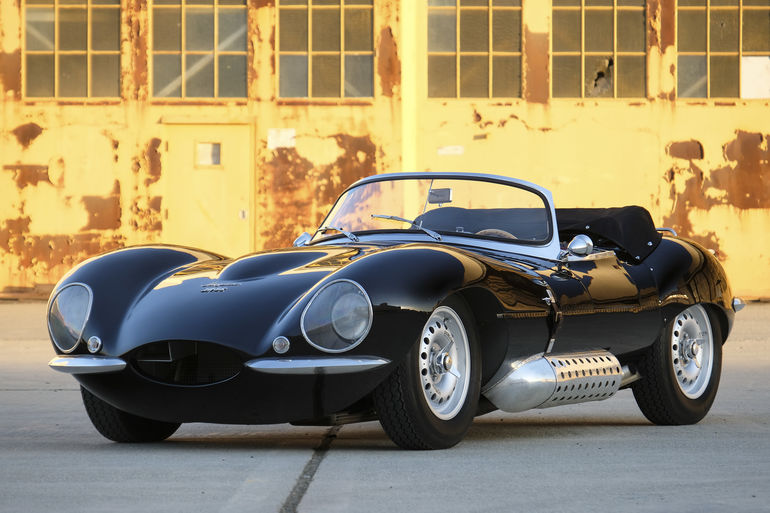 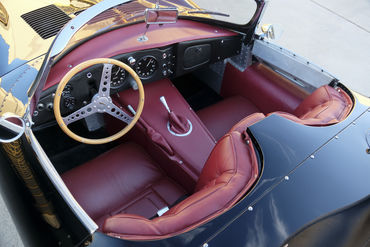 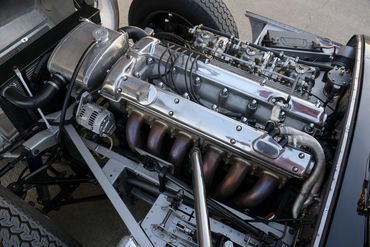 Highly Desirable Lynx Constructed XKSS Recreation in Alloy. Incredible Attention to Detail and Fitment. Fresh Presentation with Virtually No Evidence of Use.

Among the most beautiful automobiles ever conceived and crafted, the Jaguar XKSS is today regarded as one of the most desirable sports cars of the modern era. First constructed in 1957, the Jaguar factory converted twenty-five remaining racing D-Types (then under construction) into road-going configuration. This fortuitous conversion, a requirement to compete in the North American SCCA racing series, proved to be a delight for motoring enthusiasts all over the world. By adding a full-width glass windscreen, bumpers, passenger door, and a host of other detailed finishing elements, these twenty-five cars would serve as ambassadors to Jaguar’s largest and growing export market – North America. Sadly, a devastating fire at the factory destroyed the XKSS production line, tragically eviscerating nine of these exceptional factory cars. Only sixteen of the original cars survived. Over the years, particularly as values for the remaining sixteen cars have escalated into the millions, much lore has transpired regarding the nine vanquished cars, adding further to the mystique of these beautiful Jaguars. Most recently, Jaguar Cars has announced they will build the phantom nine XKSS cars as a “continuation” XKSS series, faithfully based on the original specifications in tribute to those lost in the fire. Even though these cars are still under construction, all of the nine cars have already sold for well over a million dollars each.

In 1968 a group of intrepid Sussex based motorsports enthusiasts established Lynx Engineering to tune and repair specialized British race cars. By 1972 the team cultivated the notion that legendary British sports cars could be fitting subjects for revival and began building accurate recreations of the Jaguar D-Type, C-Type, E-Type Lightweight, and the iconic XKSS. With many of the craftsmen from the original period still alive and eager to apply their artistry to such projects, Lynx was able to employ methods and construction techniques identical to the original designs, with results that accurately mirrored the original examples. Artisans worked to not only achieve the beauty and excellence in the recreations, but also worked concurrently on restoration projects, applying accuracy and technical facility to each of their Lynx offerings. The results of these combined talents have yielded remarkable cars that truly honor these legends in both beauty and performance.

This particular XKSS Recreation by Lynx was specifically constructed in 2016 and completed in 2017 on special order for the North American Lynx Representative, the first owner of this stunning alloy-bodied hand crafted sportscar. Recorded as the thirteenth of sixteen constructed to date, the handmade aluminum tub was fabricated to exacting standards and dimensions. Construction included a new handmade monocoque tail section and bonnet in 16 swg aluminum as well as a left-hand drive monocoque with an extended footwell and re-positioned seat back panels to allow for additional legroom. A new uprated front chassis frame was constructed using Reynolds tubing and original specification XKSS hood, bumpers, and luggage rack were installed. The windscreen frame was formed using 16 swg aluminum per the original XKSS with an original specification windscreen specially molded using laminated safety glass from Lynx tooling.

The handmade construction of this Lynx XKSS was combined with the majority of components from 1964 Jaguar XKE #30084, purchased by the first owner for use in fabrication. Both a build plate and corresponding body number plate are present and riveted to the originally designated sections of the car. Utilizing several major components from the donor XKE (used as well for the registration and title on the car), the twin cam 4.2 liter Jaguar engine was comprehensively refurbished including the head which was aluminum gas flowed and blue printed with enlarged ports, and fitted with a specialized Lynx Weber gas flowed intake manifold and triple Weber 45DCOE carburetors. Internally, the engine was rebuilt with Lynx competition steel rods, a lightened and balanced forged crankshaft, and Lynx semi-competition camshafts. The exhaust manifolds were specially constructed for LHD as was the hand built stainless steel exhaust system. A high efficiency aluminum radiator, low profile cooling fan, and Lynx D-Type aluminum header tank were installed to meet the cooling needs. A Getrag 5-speed gear box was installed featuring a 9.5” clutch and lightened flywheel. Utilizing the front and rear suspension from the XKE, Lynx upgrades to dampers, bushings, and improved adjustable torsion bars were just a few of the many suspension improvements to enhance handling and durability. A competition modified and rebuilt Salisbury power-lock differential was installed with rear axle ratio 3.07:1.

During the year-long fabrication from 2016-2017, the commissioning owner documented the construction with hundreds of detailed photographs showing multiple components being assembled and prepared for installation. These photos not only document the fastidious Lynx workmanship and attention to detail, they visually catalog multiple aspects of the complex build and precise specifications. After the car was completed and delivered to the first owner, he showed the car in several events frequently taking home awards of distinction including 1st place at the 2017 Jaguar Clubs of North America Championship SE Regional Concours and 1st place at the 2017 Jaguar Clubs of North America “International Jaguar Festival”. The car was sold to the second owner in 2019 who added modest enhancements to the car including upholstering the footwells and trunk, adding an electric cooling fan, and installing exterior side mirrors. The carburetors have been tuned recently and as the driving video shows, the car runs very well at both highway speeds and through city traffic. The car currently shows approximately 1,300 miles, approximately 300 of which have been put on by the current owner.

Exemplary in every aspect, this Lynx XKSS is stunningly finished with smooth and glossy black Glasurit paint beautifully applied to the hand formed alloy body panels. The exquisite form and superb craftsmanship are all the more impressive when revealed in the gorgeous black reflections. The fit and finish of all surfaces and openings is composed to exacting standards. Virtually all bright work and polished accessories are lovingly presented, accenting against the fluid black surfaces of the sensuous fender lines. The pouncing stance is perfectly composed resting eagerly on the alloy D-Type Dunlop wheels and correctly specified Vredestain tires. The look and feel of the powerful stainless side exhaust against the curvaceous body creates a brilliant juxtaposition of power and grace. Wonderful period correct details include leather bonnet latches, lever arm locks, hood script lettering, Monza fuel filler, and aircraft inspired riveted body panels. Even the hand-crafted custom luggage case is constructed with vintage charm and elegance.

The interior is handsomely tailored with attention to detail consistent with the original XKSS but allowing for safety and ease of use under modern road conditions. Here again, the use of aircraft construction methods in the raw aluminum monocoque are revealed throughout the riveted floor and welded lap fold construction of the interior. The red leather seats are formed to allow for slightly more driver and passenger space, working well with the larger dimension foot box area and slightly reduced diameter of the wood and aluminum steering wheel. Black dial Smith instruments are accurately arrayed with the controls, switches, and key features easily at hand. Additional handsome polished aluminum and plated touches appear throughout the interior including on the switchgear, hand brake and various trim throughout the aviation-inspired cockpit. Accessing the rear spare tire compartment, the hand formed tailgate drops open revealing a matching spare wheel captured by a proper leather strap, fixed into position beneath the accessory rack. Virtually every aspect of the construction is honest, authentic, and reflective of the original intent and design Jaguar envisioned for these rare road cars.

With the twist of the key and a press on the starter button, the mighty twin-cam ignites to life and slowly settles into a smooth but deeply engaging idle, hinting at the race-inspired origins of these iconic Jaguars. Driving position is well laid out and surprisingly spacious owing to the additional occupant space designed into construction for this specific car. And while a bit of learning is required, settling into the driving position, once nestled inside, you instantly become unified with the car. Operating temperatures come up quickly, all instruments indicate properly, and, with a blip of the throttle you are quickly on the road. Shifting is easy through the 5-speed synchromesh transmission with power coming on progressively, yet still offering sharp bursts of acceleration when commanded with authority, due in part to the semi-competition cams and triple Webers. Cornering is wonderful either at highway speeds or while escaping to lush mountain roads where the independent suspension and fantastic brakes can truly show their capability. Overall, the ride engineering and composure are impressive and engaging, especially considering how well Lynx has sensitively and authentically updated an already magnificent design. Included with the car are several documents supporting the build and components, a copy of the original title for the XKE donor car, and reference photos of the factory construction.

This phenomenal XKSS is ready to deliver undeniable pride of ownership and superlative driving enjoyment at a fraction of the cost of the original. Wonderfully constructed by a cadre of world renown fabricators to exacting standards, this beautifully prepared Lynx XKSS honors the lineage of these multi-million dollar cars not only for their profound beauty and success on legendary racetracks, but for the stunning and innovative engineering that continues to inspire enthusiasts all over the world. 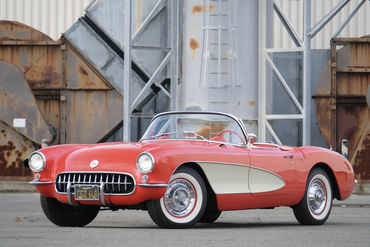 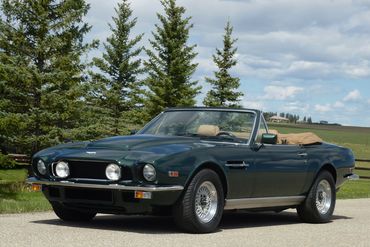 One of fewer than 500 Volantes beautifully restored by marque experts and upgraded to Vantage specifications. Known...