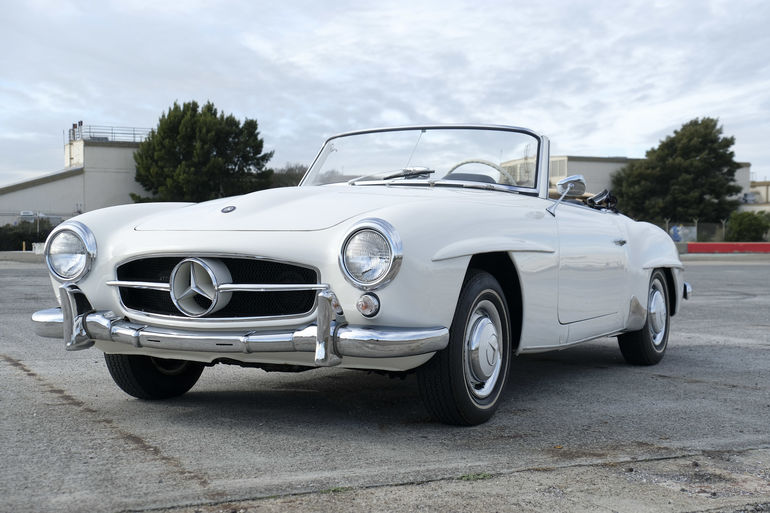 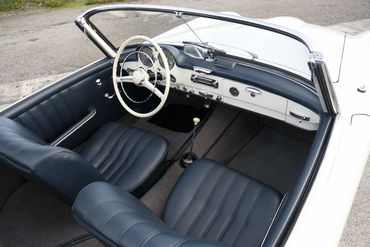 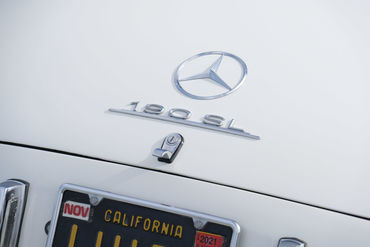 Introduced at the 1954 New York Auto Show in prototype form (alongside the 300SL Gullwing), the 190SL was a glamorous yet affordable way to enjoy Mercedes quality and refinement with open coachwork. Principally motivated by US distributor and marketing pioneer of European imports, Max Hoffman, the 190SL poised Mercedes-Benz to become a premier brand in the growing North American market. Priced at around $4000, the 190SL was slightly more than half the price of the 300SL. The attractive value coupled with irresistible looks motivated nearly 26,000 buyers to purchase these sporting cars between 1955 and 1963, generating a far greater market impact over the lower volume 300SL. The 1900cc SOHC engine with twin Solex carburetors coupled to the 4-speed transmission, delivered spirited driving for the day, supported by double-wishbone coil spring front suspension and swing axle coil spring rear suspension. Today, the 190SL remains an attractive and highly desirable classic, blending elegant open motoring with modest mechanicals.

Although production had been growing and interest was high for the 190SL the first years of production were not generating the higher volumes that would come in later years. As such just 1,806 of the 1957 models were produced for the US market. This particular example was very likely delivered new to California, remaining under single ownership until 1960.

In 1960 the patriarch of the Dahlen family, Dr. Gregory Dahlen, Jr. drove by a used car lot on Lower State Street, Santa Barbara, CA. The young doctor had just started his medical practice and was seeking suitable transportation. The dealership displayed a 300SL roadster priced at $4,000.00, and this 190SL, priced at $2,000.00. Thinking prudently, he selected the light blue 190SL and happily drove home. Dr. Dahlen drove the car for about ten years with regular services provided by well-known Mercedes-Benz specialist Gunther Moritz of Moritz European Cars also located in Santa Barbara. In 1971 the doctor’s daughter began attending UCSB. Much to her delight, she was offered the 190SL as Dr. Dahlen took delivery of a suitable replacement, a Lamborghini Islero. After her use, the 190SL extended dutiful commuting efforts for her younger brother as he too began attending UCSB in 1977. During this period, the car was serviced by Manfred Gauer who was trained by Moritz and had started his own import service garage. In 1973 with fuel prices soaring, Gauer converted the car to a more fuel-saving single Solex intake, which remains on the car today, although the original carburetors, intake plenum, and aluminum cast breather system have been retained with the car.

In 1979 the car was delivered to a restoration shop in Goleta, CA. At the time of restoration, the car had amassed 187,000 miles, believed to be original since delivered new. Given the long-term California ownership, the restoration was straight forward, addressing incremental corrosion with welded-in patch sections and new spare tire and tool storage tubs, typical of unibody repairs often performed on these cars. All exterior parts were removed, the interior removed, and all mechanical systems addressed. A bare metal respray in white lacquer, new blue leather interior, new top, new carpets, an engine and gearbox rebuild, as well as other systems and details were comprehensively addressed on the car, totaling $25,000.00, a truly staggering sum for this period when a rather nice 300SL roadster could be purchased for the same price. Two years later, the car was sent to another shop for additional mechanical work. The 121.921 190SL series engine currently in the car displays both matching engine block stamping and tag numbers 7500517, a number that is within the digits of a matching numbers sequence to the chassis number 7500522.

After the restoration, the car remained in use with the family for occasional driving. At one point during this period the left corner of the car was tapped backing out of the garage. The taillight was replaced, and some light bodywork completed inside the trunk with very minor brush applied touch up on the exterior edges of the taillight section. In 1989, the car was gifted to the daughter of the family, a Northern Ca resident, where it has remained since in her possession. Services over the years have included changing the brake fluid, various oil changes, and upon consignment the fuel pump was serviced. Over the past 40 years since the restoration was completed, the car has accrued an additional 21,000 miles currently indicating just over 8,000 miles on the odometer, having turned over twice.

Today this 190SL presents as a cohesive example of a wonderfully sound and visually pleasing car. Though the restoration is now over 40 years old, the car has been thoughtfully enjoyed and very well preserved during the 60 years of family ownership. The gloss white paint is very well done with smooth and consistent coverage accenting against the polished trim and chrome. The forward portion of the right rear quarter panel shows spider-cracking on the paint surface and other small areas show minor chips but otherwise the visual impression is quite good. The various inner surfaces, edges, corners, and body trim are clean and tidy. The doors shut very well, retaining very good panel gaps and crisp latching. The hood and trunk exhibit very good fit and tight closure with consistent gaps. Based on visual review, and a mismatched pair of headlights, it is possible that the right front fender was replaced at one time before the current family ownership, prior to 1960. The chrome is in very good condition, with nice luster and clean, bright reflections, though a few pieces show light hazing, one rear overrider has lost some of its luster, and there is some pitting on the corners of the front and rear bumpers. The car retains the original type wheels and trim rings, with matching small wheel covers. All lenses, lighting, and glass are in very good condition.

The interior is a very nice display of correct high-quality finishes still retaining a very cohesive presence even after 40 years have lapsed since the restoration. The leather seats are beautifully softened by careful use and preservation, creating a very satisfying patina. The dashboard is particularly nice with excellent gauges showing authentic aging to the dial faces but still offering clarity and contrast. The excellent condition of the chrome bezels and refined detailing of the dash, steering wheel and other interior elements are very much in keeping with the detailing and overall condition of the car. The interior door panels, armrests, and various trim are all in very good condition settling in harmony with the seats and dashboard, while the carpeting exhibits a bit more wear in the footwells and minor discoloration to the rear parcel shelf tray. The blue soft top appears to be a correct Hartz top in good condition, very likely seldom if ever used outdoors since it was installed during the 1980 restoration. A matching color top boot is included but it retains a different snap pattern so is not fitted to the car. The trunk is clean and properly finished in satin black housing a matching sized spare tire.

The engine compartment is clean and tidy with proper presentation using largely correct parts while maintaining original components wherever possible. The original Solex carburetors have been retained but the current single Solex and intake system is in place just as it has been for nearly 50 years. Clearly repairs and general services have been performed over the years with attention to replacing correct lines, hoses, and electrical as needed. The various and correct Mercedes-Benz numbers, build plates, and details consistent with original examples are in place indicating the early 1957 production sequence number, light blue exterior paint color, and body number which is consistent with the body to chassis sequences for original cars. The chassis displays evidence of incremental corrosion as well as patch panels noted from the restoration including floor panels, replacement spare tire well, and tool storage well. The right rear inner fender panel and a few other smaller areas also show evidence of corrosion.

Driving manners are as expected for a long-term single-family example of this vintage and condition. The recently serviced fuel pump makes for smooth operation and the engine delivers surprisingly strong power. The gearbox operates very well, and the responsive clutch pedal makes for brisk, delightful driving. The independent suspension, sound brakes, and responsive ride offer two occupants ample space for stretching out while driving, weekend getaway tote storage behind the seats, and plenty of trunk space suitable for longer journeys. 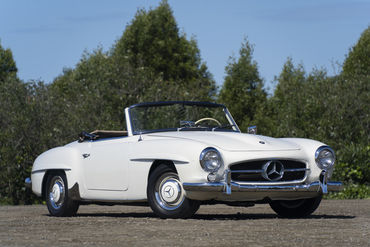 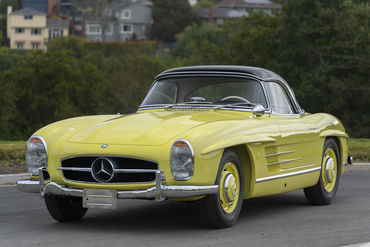 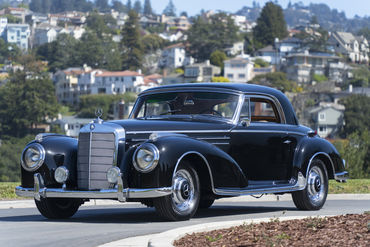