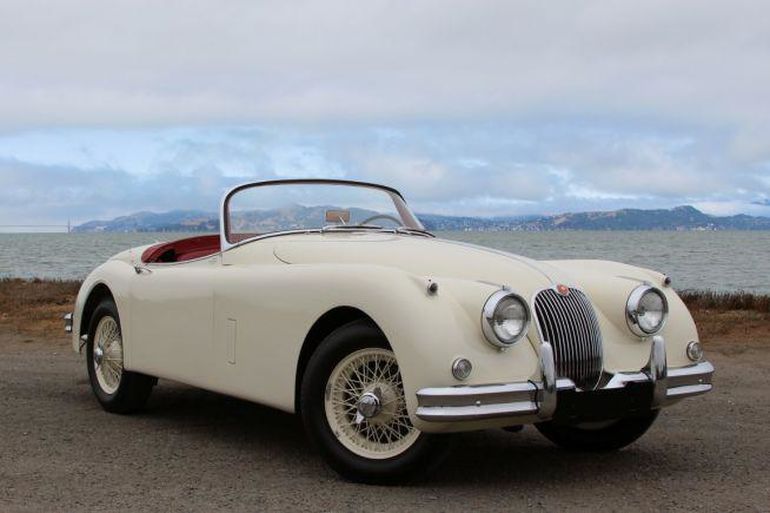 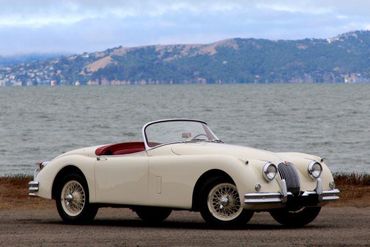 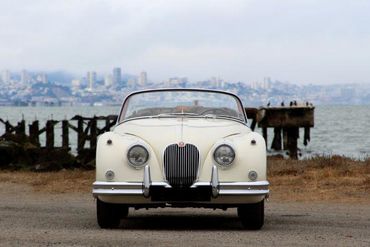 With its sensuous, wind-cheating body, dual overhead cam engine, and 4 speed manual gearbox and overdrive, the Jaguar XK150 became the final evolution of the much-lauded XK 120 and 140 models. The XK150 incorporated a more blended front fender, smoother body surfacing, and the windscreen moved back to allow for a larger hood.

The highly desirable “S” roadster featured a smooth, one-piece windscreen void of any side vent glass and accented by beautiful chrome trimmed side glass. This sweeping trim line blended into the windscreen, creating a tidy upper body that could be quickly converted into a roadster simply by rolling down the windows and stowing the top. A small interior cover elegantly capped the rear deck. The exterior was further devoid of side mirrors, fog lamps, an antenna, or hood mascot – adorned only by two delicate chrome “S” emblems along the upper leading edge of each door.

Fewer than 900 XK150S left hand drive examples were built. The 150S offered a significant performance advantage over the base model with its three 2 inch SU carburetors, straight-port head, upgraded camshafts, overdrive, and a lightened flywheel. Late-production XKs were further equipped with Le Mans-proven Dunlop disc brakes. The resultant advances produced the fastest, safest, and most comfortable sporting GT cars available at the time.

This particular car began its restoration journey, completely original, and unmodified. It had been stored in California for over twenty years when XK experts Jim and Gary Kakuska of J. K. Restorations in Oswego, Illinois acquired the car. All numbers on the car match its original data plate and the numbers on its Heritage Certificate. According to its Jaguar Daimler Heritage Trust Certificate, this XK150S was completed at the factory on November 27, 1958, and dispatched on December 22, finished in cream with red upholstery and specified with painted wire wheels, radio delete, fog lamps, and whitewall tires. XK historian John Elmgreen researched the Browns Lane factory archives and found this Jaguar was shipped from London to Miami around January 1, 1959, aboard the S.S. Hindrich Oldendorff. Four known owners have been documented with the car, the majority of ownership having been in California with the earliest documented CA title dating Feb 1988.

The current owner (previously having his XK120 Alloy car restored by the J. K. Restorations) purchased this XK150S shortly after the restoration was completed in July 2012. During the restoration, the body was removed for a bare-metal repaint in the original factory color of cream, while the chassis was disassembled and refinished, all major components were rebuilt including the suspension, brakes, gearbox, overdrive, and limited slip differential. The interior was properly trimmed in red leather and the instruments were rebuilt. The engine was removed and rebuilt with new forged pistons, stainless steel valves, valve guides, and camshafts. Timing chains were installed and the engine was balanced and blueprinted. The exhaust manifolds were refinished using the proper porcelain coating. During the restoration, an undated cardboard “for sale” sign was found in the passenger pocket in which Ensign Norris (the second known owner, believed to reside in Escondido, San Diego County, California) offered the car for sale at $3950.


The goal of the restoration was to achieve the highest Concours standards while also providing high performance in Slaloms and reliability in Rallies. After completion in July 2012, the car participated in numerous JCNA events, winning Best of Shows and North American Championships in Concours and Slaloms. It won the 2014 Hilton Head Island Concours d’ Elegance, Featured Marque Award (Best Jaguar) and First in Class at the biennial JCNA Challenge Championship Concours in September 2015. The restoration was documented in three articles in the XK Gazette, including the car’s January 2013 cover appearance. The car has dependably covered 2600 miles since its restoration. The restoration was the subject of a three-part XK Gazette article published by Philip Porter and featured on the cover of the January 2013 issue.

Overall the car remains in excellent condition with paint and chrome trim in particularly fine shape over the past four years since the restoration was completed. The interior surfaces are in excellent condition with no significant signs of wear. Carpet is in good condition overall with minor edge wear at the door sills. The engine compartment is beautifully finished with proper polishing on the factory aluminum castings, proper gloss finishes on assorted black parts, and correct engine color. Instruments are wonderfully detailed with correct finishes, proper dials and needles. The overdrive can be easily accessed from the dashboard and functions properly.

With a flip of the switch and just a moment’s pause for priming, the engine bursts to life with a single push of the starter. Engine idle is smooth and crisp with no pulsing. The clutch engages easily and all gears are smoothly operated without excess binding. The triple carburetors show their power in the mid to upper revs as the car continues to pull on hard acceleration and Jaguar’s racing heritage emerges. Shifting through all gears, one enjoys the exhilarating sensation of speed coupled with crisp downshifting while tapping the trusting Dunlop disc brakes (available only on these later production “S” models). Braking is smooth and in keeping with technology of the period.

A proven Concours, Rally, and Slalom events winner, this XK150S presents beautifully. The highly authentic restoration celebrates the car’s original appearance and elegant visual simplicity. This powerful XK150S roadster is an exquisite example of a classic Jaguar sports car – one that is truly worthy of any enthusiasts desires.

JCNA Special Award for best score in North America for a Monte Carlo Rally in 2013.

Items included with the sale: