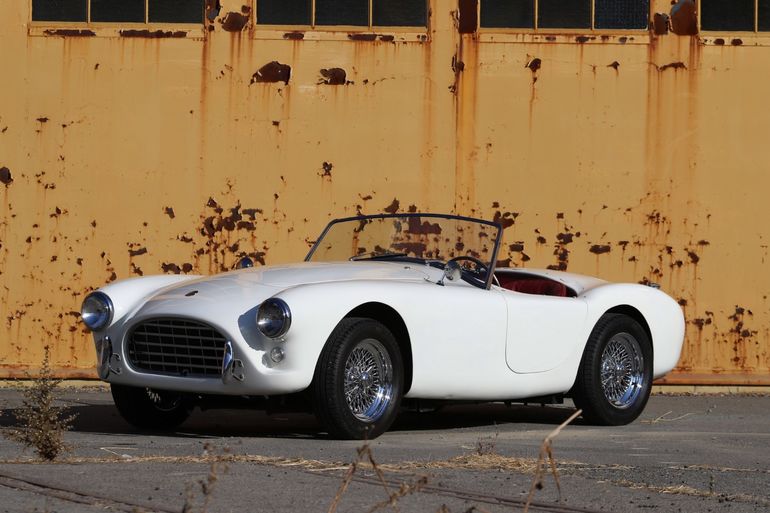 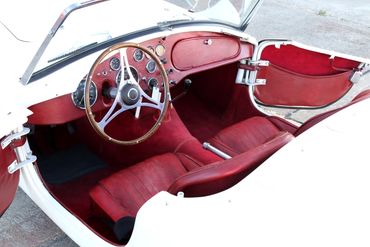 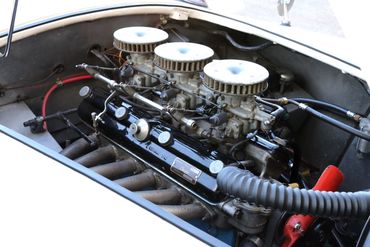 Among the most identifiable sports car shapes in the world, the AC Ace continues to inspire enthusiasts after nearly 70 years have lapsed since the 1953 introduction. The original design, first configured by John Tojeiro, based on Cooper mechanicals and an MG engine, set the stage for the production version to follow by selling his design to AC Cars. The stunningly beautiful Ace would remain in production through 1963, but in 1961 would most notably become the basis for Carroll Shelby and AC motors to assemble an AC Ace powered by a Ford 260 V8 engine. Ultimately becoming the 289 Cobra, and later 427 Cobra, the formidable Ace set the standard for a light, agile, and highly capable sportscar even in the hands of privateers with little or no racing skills.

This particular AC Ace-Bristol, BEX 1067, has been documented in the competition history book “Ace Bristol Racing” by John McLellan and Tony Bancroft as having been completed at the factory on June 26, 1959. Having been built in left hand drive configuration, the car was shipped to the US and then returned to the UK for racing duties. Period racing history is recorded by McLellan indicating that Bill Bowman raced it at Goodwood, May 6, 1961 where he achieved 3rdplace. Other 1961 races with Bowman at the wheel included May 22nd at Goodwood, May 27th at Mallory Park, June 10that Goodwood, August 12th at the Silverstone 6-hour Relay, August 26th at Aintree, September 2nd at Crystal Palace, and September 16th, once again, at Goodwood. On page 122 and 123, BEX 1067 is seen with Bowman at the wheel during the Le Mans style start of the Goodwood race in September 1961. The car can be seen in the starting lineup, one of many races documented with this car.

Although it is typical for racing cars of this period to have been modified or damaged during competition, it appears that BEX 1067 not only escaped any significant damage, it was able to retain much of its original components in part due to thoughtful ownership that has followed the car at every turn. By 1988, a small handwritten notebook accompanying the car indicates it was purchased and serviced with various entries until 1990 when the mileage recorded was 20,469. Shortly thereafter, well-known sports car enthusiast and collector Carey Kendall purchased the car, owning it until 1994 when it was consigned to Fantasy Junction. The current owner purchased it shortly after consignment and has been the proud owner for the past 25 years. Purchased with 23,439 miles on the odometer, the car currently shows 24,637 miles, which, based on the history and known mileage are very likely original to the car.

Under the current ownership, this AC Ace-Bristol has been thoughtfully maintained with records dating back to purchase in 1994. A few years ago, a stainless-steel fuel tank was custom made to the original specifications and installed along with service to the Girling front disc brakes, rear cylinders re-sleeved and relined. Recently, a July 2019 service totaling $5,200.00 was performed by Sierra Classic Sportscar in Meadow Vista, CA. During this service, the radiator was removed and refurbished, and the oil cooler lines replaced with correct hoses and hardware. All rubber fuel lines were replaced, and a professionally rebuilt OEM SU fuel pump was installed. During this time, the stainless-steel fuel tank was removed to facilitate the installation of brass ferrules, installed to prevent fuel seepage. All hard fuel lines were also inspected and serviced as needed. All fluids were replaced, the electrical system reviewed, new ignition points and condenser installed, and clutch and brake hydraulics addressed as needed.

Today BEX 1067 remains as a truly remarkably preserved and maintained Ace-Bristol. Although originally painted silver, the ivory white paint (likely applied in the late 70s or early 80) is remarkably well-preserved given the age, showing very nicely with excellent gloss and coverage, enhancing the factory aluminum body. There are areas where the paint surface is cracking, most notably at the cowl, a few areas with chips along the panel gaps, and light scratching in some areas. None of these surface elements detract from the otherwise honest and handsome porcelain-like feel of the paint. The exterior trim, while limited, is in good condition overall including the windscreen surround complete with factory construction plaque. The lights, lenses, and emblems are all in very good to excellent condition. The 6” x 15” modern wire wheels are in excellent condition, shod with radial tires that will likely need to be replaced, given the age.

The interior is an absolute delight in every respect. The original red leather seats retain a wonderfully settled patina, which has become beautifully worn-in, but still remain snug and supple when one is nestled in the driver’s seat. The dashboard and instruments are believed to be original with very nice, slightly faded dial faces though still showing excellent indication. The Moto Lita wooden steering wheel has been preserved over the years and maintains a remarkable warm wood tone, with just the right amount of wear, befitting the years of use. The carpet, replaced some years ago, has now settled just a bit to feel right with the original door panels, red covered dashboard, and inner door panels. A pair of vintage style competition seatbelts hints at the former competition history. The interior, revealing decades of authentic textures, is imbued with a dignified combination of motorsports integrity and joyful enthusiasts use.

Releasing the hood locks and raising the hood, the 100D2 engine still retains the original #982 D2 cylinder head, topped with three Weber 34 ICH carburetors. The #982 D2 block has been replaced with #865 D2 and an electric radiator fan has been installed to improve cooling. The engine and engine compartment further reflect years of proper care and attention to originality, without the fussiness of a meticulous show car. The cohesive presentation, sound mechanicals, and honest finishes deliver all the delights of very nicely outfitted driver’s car, ready for sporting use.

The trunk compartment is easily opened with a twist of the handle, revealing a clean and tidy trunk area with original finishes and a full-sized Dunlop Racing 5.5 x 15 spare tire mounted on an original painted wire wheel. The underside of the car is unrestored but very tidy and correct, presenting largely original components, finishes, and details. There is no visual evidence of structural damage to any of the main frame tubes.

The car fires up easily and without hesitation, setting off the potent Bristol engine through the triple Weber carburetors. The exhaust note, while subdued, still hints of the famed racetracks this car once devoured. Reaching inside to tug on the cording that releases the door latch, and easily nestling into the well-formed seat, the view over the cowl and beautifully arched fenders reminds any enthusiast of the reason this car was so influential on so many car designs. Once behind the wheel and the competition seatbelts are latched, a quick snick into first gear and you’re briskly off the line. The light alloy body allows for snappy acceleration while power comes on strong due in part to the Weber carburetors. Within a matter of seconds, you are hurling along at freeway speeds enjoying the look and feel of a truly well-sorted sportscar. Handling and ride are quite nice, almost docile, with extra grip from the wider wheels and tires when carving corners. Excellent braking via the Girling front discs, a unique feature of the Ace name, also add to the fantastic balance and performance of this car. This AC Ace-Bristol comes with a host of original components, records, and various items including the 1994 purchase order and bill of sale, Carey Kendall DMV registration, major receipts for service and repairs dating back to 1994, Carey Kendall receipts dating back to 1988, 1988-1990 hand written pocket notebook records of service, 1994 Chico Concours entry materials, 1994-1999 Action (AC Owner’s Club) magazines in binders, 2000-2025 bundled Action magazines, and 50th and 60th anniversary ACOC books. Other items included with the car are various workshop manuals, AC Bristol General Instructions Owner’s Manual, Spares Handbook, Lucas Electric wiring diagram, and other specialized reference books. Also included are four original 16” Wire Wheels, the removed roll bar, a car cover, tonneau cover, a correct jack, hammer, extremely rare and complete tool kit with wrap, and grease gun.

Remarkably original and beautifully reflective of long-term ownership, this wonderful AC Ace-Bristol is a truly delightful example of the very reason these cars became so important to sportscar design and development all over the world. Period racing history, original interior, and low miles magically converge to make this Ace a driving delight in every respect. Mechanically sorted and ready for enjoyable showing, driving, events, and tours, this Ace-Bristol is sure to deliver years of further superlative performance just as it so inspired nearly 60 years ago.