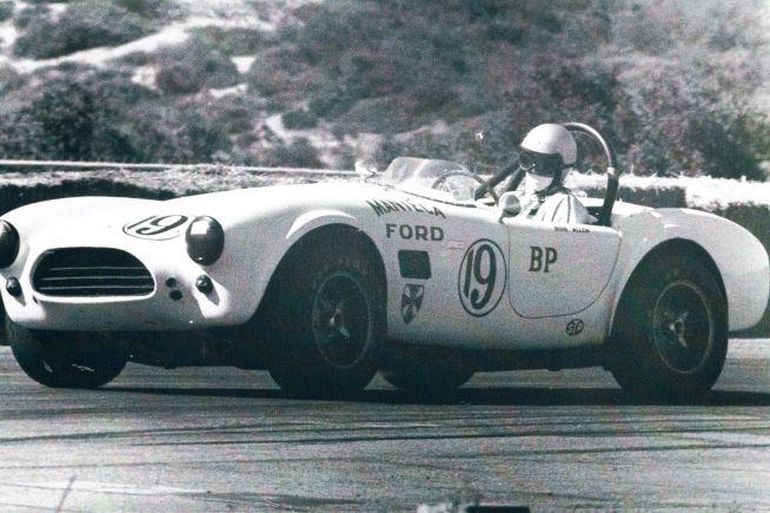 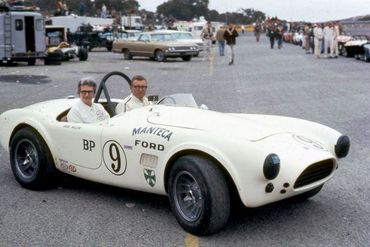 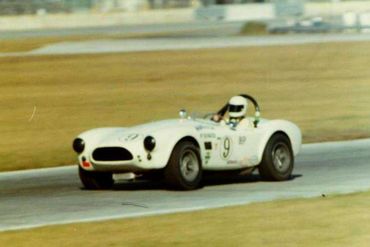 Like any good recipe, the ingredients seem simple; introduce a lightweight attractive aluminum body mounted on a sophisticated chassis and couple it to a reliable performance engine. Simple, but somehow Carroll Shelby, Ford, and AC Motors mixed all those ingredients together with a dash of Texas bravado and the iconic Cobra was born. Beginning construction at the AC factory in the United Kingdom, the completed bodies and frames were shipped to Shelby American’s Southern California factory where they were mated with the source of their extraordinary power, the venerable 260 and later 289 cubic inch engines. The automotive press lauded the new Cobra as their latest darling, featuring multiple articles with racing legend Carroll Shelby, and full color magazine covers showing what appeared to be multiple cars, which were simply the same car, painted a different color each time the press promised a cover feature. After the first competition outings sorted out the kinks, the Cobra proved to be a durable, quick, and extremely capable car. Cobras, in 260cid, 289cid and 427cid versions went on to achieve tremendous racing success, in addition to becoming icons of performance not just in the US, but throughout the world.

CSX 2237 was constructed in the AC factory in the UK and delivered in white over red interior. The car was billed to Shelby American on November 24, 1963 and delivered via the “”SS Picardy” where it was later invoiced to Thompson-Fauskee Ford (Santa Barbara, CA). The invoice read “1 Cobra-Ford, chassis # CSX2237, white/red ($5,195.00) with Class “A” accessories including aluminum rocker covers, WSW tires, and a luggage rack ($280.50), 5 chrome wire wheels ($105.00) and 5 quarts of anti-freeze ($3.55), resulting in a total invoice of $5,584.05. The first owner of record was Phil Records Productions (Los Angeles, CA) as delivered. Sometime in 1967, the car was sold to Manteca Motors Ford (Manteca, CA), owned by the wife and brother of Bob Allen, who set up the car for SCCA racing, shortly after wrecking his previous Cobra. The car featured a roll bar, competition windscreen, and livery including Manteca Ford and #9 roundels.

It’s important to note that during the early years Shelby American was not taking orders for competition cars, rather they were selling cars and prepping them for racing in a separate race department. Each car was very different and they learned early what worked and what didn’t. Concurrently, privateers were doing very much the same thing experimenting with combinations on and off the track. 45 cars were “race-prepped” by Shelby, rarer still, 31 cars were purchased as street-cars and converted to race configuration privately (Shelby Registry citation of serial numbered cars with period conversion to racing). CSX2237 was exactly that – an early pioneer car of privateer racing at the hands of Bob Allen. From 1967 through 1969, Allen raced the car with great success then advertised 2237 for sale in the fall of 1970 as “289 Cobra B/P points leader Nor/Pac Division. Best prepared, best appearing, and fastest Cobra at 1969 AARC. A sure winner for this year’s ARRC. $6,500 firm.” At this time, the original box-flared, rack and pinion equipped car, was noted as “complete with fresh engine, spare parts, street equipment, and trailer”. The car was sold in 1970 for $6,000.00 to Gary Underwood (Brea, CA) who racked up eight first-place wins in two enduros, two SCCA regional races, two slalom races, and two Solo events driving 2237. During this period the car appeared in white with blue racing stripes as #9 or #19. By this time (and referenced by period photos) the front and rear frame and suspension mounts had been cleverly modified in order to run 7.5” Halibrand wheels without modifying the unique factory box flares, thus retaining the original body work. By 1973 the car changed hands again, this time to Duane Anderson and George Sirus (La Habra, CA) who repainted the car blue, reupholstered it in black, removed the roll bar, and returned it to street configuration, but retained the Halibrands and suspension modifications. The car remained in the family for 30 years and was shown in 2003 at the Petersen Auto Museum Cobra display in primer, still displaying the Halibrand wheels and original bodywork. By 2007, the car was repainted white with blue stripes where it has remained in this condition since.

Today CSX2237 proudly displays its racing heritage and historic import as one of the earliest independently developed racecars in Shelby history. The paint and overall exterior condition is properly presented with the original bodywork believed to be as it left the factory. Still running the Halibrand 7.5” wheels all around and the competition-based suspension, the car has a hunkered down, purposeful stance hiding the cornering capability beneath the factory box flared fenders. The small mouth opening retains the street trim grille mesh as delivered from the factory, and proper style competition jacking mounts at front and rear. Body panel fit is quite good overall and all closures show even gaps throughout. Importantly, this 289 Cobra retains 2237 body number stampings on both door hinges, the trunk latch, and also on the driver’s side hood latch. It is unusual for a car with competition pedigree to have remained so wonderfully intact.

The open interior features a nice patina on the seats and various panels. Instruments are properly arranged and appear original to the car along with a very nice wood rimmed steering wheel. The foot boxes are uncarpeted owing to the mostly competition nature of the car, revealing once again, the original bodywork. Creative cool air vents have been constructed to funnel fresh air into the driver’s and passenger’s foot wells. Under the hood resides a properly prepared 289 with correct features for the period and much of the originally specified equipment.

The car starts easily and settles into a deep throaty idle drawn out from the dual exhaust, which exits under the car and properly terminates from the straight cut tail pipes. The car launches quickly and without hesitation, reminding even the most skilled drivers to pay attention. Demand increases to delight when cornering. The grip from the wider tires is nothing short of phenomenal and surely must be attributed to the multiple first place wins racked up by 2237 earlier in its racing career.

This example is equipped with a top assembly, and a correct jack. A history of racing at the hands of dedicated performance enthusiasts, CSX2237 embodies all the magical traits of a factory original Shelby Cobra (including the original body, small mouth grill intake, box flares, and documented ownership), while also featuring a winning competition legacy. Privately and successfully raced, with proven Shelby Registry documentation, CSX2237 awaits the challenge of the open road in street trim, with stealthy competition capability lurking beneath, ready to strike at any mountain road, touring event, or vintage race.