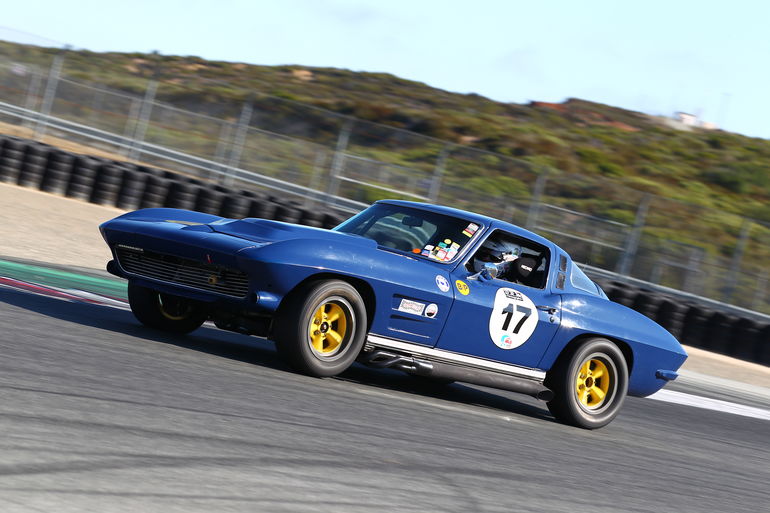 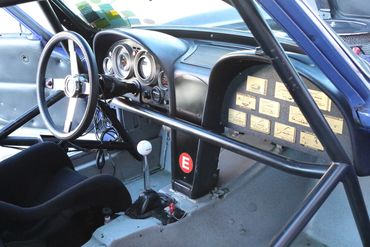 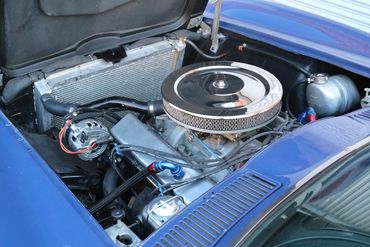 Steeped in a rich performance history on both the open road and competition racetracks all over the world, the Chevrolet Corvette has become one of the most sought-after cars for vintage racing events. Known for their durability, great looks, and reasonable track costs, the Sting Ray continues to be a great car for capable drivers looking to confidently compete in sanctioned vintage events.

This particular car was sold new in California, documented by a 1977 California registration assigned to Adriene Moffat Provo. The next known owner, Doug VanDorsten, purchased the car by early 1990. After VanDorsten’s purchase, Herlinger Corvette was engaged to restore the car to vintage specifications. Herlinger’s restoration included restoring the disc brake conversion, legal per the 1967 SCCA GSR rule book. The detailed Herlinger invoices retained with the car, show extensive mechanical and cosmetic work performed throughout the early 1990s.

After the restoration, the car went on to compete in HMSA, CSRG, and SVRA events as documented in the two SCCA logbooks accompanying the car. Entries from 1990-2019 include events at Sears Point, Thunderhill, and Laguna Seca. In 2013, Bruce Trenery, owner of Fantasy Junction purchased this Corvette. Trenery campaigned the car in races from 2015-2019, including recently qualifying 4th at the 2019 Sonoma Speed Festival. During the course of his ownership, Trenery ran the car with a few specially prepared engines. In 2019, Trenery purchased the 327 engine currently installed in the car. Prepared by Tom Armstrong for use in Susan Armstrong’s well-known Z06, the engine was a good, used race unit, built in 2009. The car has been run several times in the Monterey Historics and Reunion as well as the Wine Country Classic and the Daytona 24HR. Classic where it finished on the podium in both appearances.

Documented with 30 years of records and service performed by experts in vintage racecars, this Corvette is currently outfitted with the Armstrong built 327 cubic inch V8 engine, 4-speed Muncie transmission, original type front suspension and four-wheel disc brakes. A set of America Racing magnesium wheels and Good Year Blue Streak racing tires complete the racing set up. The car is currently running 3:90 gears great for Sears Point, Thunderhill, Laguna Seca. A 3:08 ring and pinion is also included with the car, which is perfectly suited for running at Daytona up to 160 mph.

In 2013 extensive work was performed on the car in preparation for the racing season. A new fire suppression system was installed, a brake and differential service was done, fuel cell service, and a new oil cooler installed. More recently, the limited slip rear end, differential, and transmission were rebuilt, and the clutch replaced. The 327 engine currently in the car was built in 2009 by Tom Armstrong to full race specifications. Having previously been installed in Susan Armstrong’s Z06, Trenery purchased and installed it in 2019. The rebuild included an Isky Red Zone Lifter set, JC pistons, Isky valve spring set for flat tappet cam and stock rockers, titanium valves, new cylinder heads, coated main and rod bearings, Duramoly gapless standard oil tension ring set, and Cometric head gaskets. When completed the engine was dyno tested putting out numbers in the mid to high 400 hp. Although the engine still runs, it tends to run hot and thus will need to be freshened prior to running in the 2020 season.

Today the overall condition of this Corvette is representative of cosmetics consistent with a durable racecar that has seen track time, but shows no evidence of significant damage. The condition overall has held-up but the finish now shows cracks in the paint, and sink marks in various locations. The blue paint is glossy and the body panels are well-aligned. The power bulge hood is a nice touch, which was installed prior to 1990 as the previous owner reportedly was running the car with both a 427 and 327 engine depending on the class he was campaigning that year. The hood releases from the inside and hinges forward, consistent with the stock configuration. Both doors open and shut without issue, via stock chrome plated door handles. The retractable headlight doors fit properly to the hood and can be raised manually. A functional lightbar installed underneath the forward hood edge gives good illumination at night. With the major chrome trim removed, the car has a vicious look reminding everyone of the original shark themes that influenced these cars when they were first designed. The external chrome plated hinged fuel door is still in place and functional. The aggressive flat black side pipes deliver a menacing sound, coupled with the yellow American Racing mag wheels. The rear window has been replaced with a lighter clear plastic material and the side glass and heavy framework have also been removed. The overall exterior presentation is menacing and purposeful with a commanding stance that demands respect for the capabilities of this car.

Inside, a Recaro driver’s racing seat (installed in 2013) has been fitted along with a newer roll bar, fitted in the 1990s. The former roll bar, used in races prior to 1990, must have been removed during restoration and thus, the number for that roll bar is no longer with the car. The remainder of the interior is sparse and functional with generally good cosmetics including the traditional Corvette twin-binnacle dashboard and a passenger seat with a Simpson harness. A nice surviving touch are the black leather inner door panels, which appear to be the original panels that came with the car when delivered new.

Under the hood, the 327 engine is all business with components and features that remind us of how simple and effective the powerful and torquey 327 engine could be. Clean and purposeful, the engine compartment is tidy and roomy, making for easy trackside adjustments or changes as needed. Underneath the car, the suspension, driveline components, performance equipment, and brakes all appear properly serviced and typical of a racecar that has been run in recent events. The car comes with the 3:08 ring and pinion, an original driver’s seat, and several miscellaneous Corvette parts removed from the car when it was converted to race configuration. Also included is a 3” file folder, filled with receipts dating back to the early 1990s, reference specifications, dyno and build sheets from engine currently installed in the car, suspension setting information, SCCA logbooks dating back to 1990, and a spare set of American Racing mag wheels.

With over 30 years of documented history, professional preparation, and years of vintage racing history, this Corvette Coupe B Production racecar is ready for another exciting chapter in its racing life. Capable of running toward the front, this vintage Corvette is an inexpensive ticket into some of the greatest vintage events hosted throughout the world.