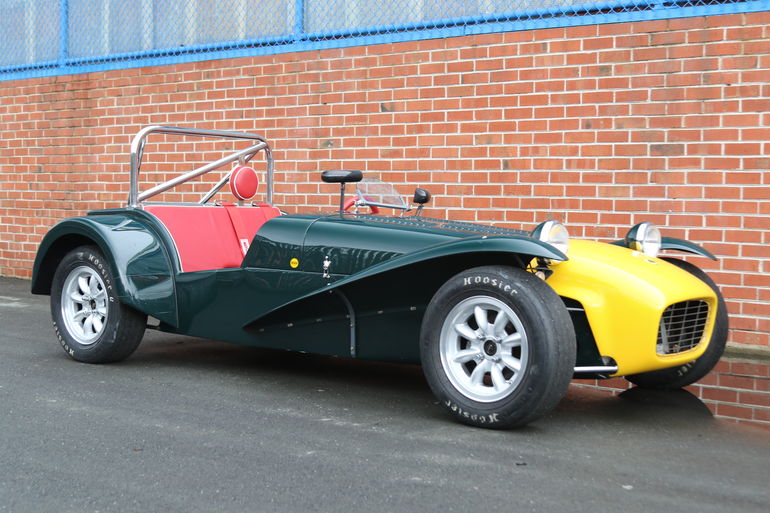 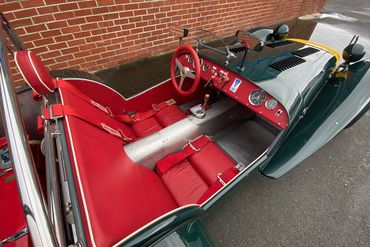 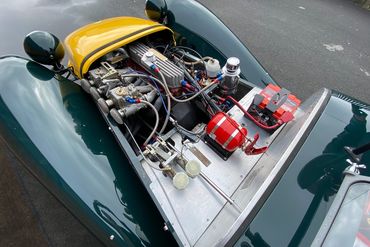 “Simplify, then add Lightness”. Whether actually spoken by Colin Chapman or simply one of the many philosophical contributions that add to the lore around his engineering genius, this philosophy is certainly embodied in his cars. And nowhere else is this more evident than in the ground-breaking Lotus 7. Lightweight and purposefully built, the Lotus 7 set the standard for nimble sporting pleasure and sheer driving joy. Mechanically simple but innovative in design, the Lotus 7 was refined after the first series introduction into the Series II with upgrades including a redesign of the rack and pinion steering, more footbox room, increased fuel tank capacity, and fewer space frame tubes. Great looks, entertaining driving characteristics, and simplicity are among the many hallmarks of the Lotus 7, all of which are immediately confirmed by the sweeping grin across your face as you lower yourself inside and hit the open road.

Although much of the build philosophy for the Lotus 7 is rooted in racing construction, these street legal cars can be uproariously quick, notoriously agile, and with their classic blend of good looks, impossible to ignore. The combined driving entertainment and maintenance simplicity offers even the most modest budgets a fantastic opportunity to experience peerless performance in an iconic sports car.

This particular Lotus is a genuine Series II Super 7, with known history dating back to 1969. Originally manufactured at the factory and purchased by Lotus Southwest, this Left Hand Drive car departed Lotus Cars on 23 July 1963, destined for the first owner. The next owner retained the car from 1972 to 1999, followed by the next owner who purchased it in 1999. The new owners, a veteran race car builder/driver father and son team, with more than 70 combined years of engine building and professional speedway racing, had previously restored several race cars including a Lotus 11 currently on display at the Skip Barber Museum. The team decided to restore this Lotus 7 specifically for track use, primarily for the son’s wife to enjoy as part of the racing family. The car was completely disassembled down to the frame and delivered to Willie Striker (a frame specialist working with Dave Vegher). During the restoration, the car was stripped to bare metal and the chassis media blasted, stiffened, and reinforced per Caterham competition recommendations, vastly improving the torsional rigidity of the chassis. The aluminum body panels were removed and replaced as necessary and a Tom Crowther Racing 1500cc Ford Cosworth 116E engine was built and installed in the car. Crowther worked closely with the owner to build the engine for reliability and durability rather than hit peak performance targets that can often result in engine failures. The comprehensive restoration (beginning in 2000) was completed by father and son with support from a cadre of professionals and racing experts. With the car set up for track use, the car was raced on the West Coast at CSRG, General Racing, and HMSA events, with the son’s wife competing in five or six races. Along the way their daughter got the bug, taking up cart racing, building a three-generation family of racing enthusiasts. In 2014 the car was consigned to Fantasy Junction and sold to the current owner. During his ownership, the car was returned to more casual street use, properly cared for, and mildly enjoyed.

Today the car is still nicely presented, having been well-maintained over the past 15 years since the restoration was completed.

The following items were part of the restoration:

Today the car presents in very good condition, displaying attention to detail and workmanship consistent with a race-prepped car. The iconic green and yellow Lotus colors are further enhanced by the red interior and dramatic low-profile stance. The paintwork was done to high standards and remains in very good condition other than a few minor stress cracks and road dappling appearing on the rear fenders and nose piece which is typical of road use. As the car was built to racing specifications, it has headlamp blank off plates, a Brooklands style windscreen, full width roll bar, Hoosier racing tires, and other concessions to track use. The chassis and suspension are well-detailed and, as is the case with much of the car, have been built to a high standard, evidenced in the hardware, lines, and systems used throughout the build.

The interior is nicely restored in a period manner, with vivid red leather seat pads and dashboard, as well as correct Smiths gauges, wide Simpson racing seat belts, and bare aluminum floor panels with exposed rivet construction, all of which add to the delight of this well-sorted Lotus 7. Condition of the interior overall is clean and largely unmarked, save for a few areas of general use. While much of the sparse nature of construction is evident, many details enhance the looks of the Series II including the louvered hood, wooden gearshift knob, matching red padded rim steering wheel, and floating front fenders, to which one side conceals the eagerly trumpeting exhaust.

The engine compartment is very impressive, showing high levels of preparation with no expense spared to obtain a visually delightful and highly capable result. Features include twin Weber carburetors, Aeroquip fittings, woven stainless steel lines, finned aluminum Cosworth valve cover, and professionally wired lines, fittings, and support hardware. The overall look and feel of the engine deliver a high level of confidence and satisfaction, confirmed by the performance specifications of the race-prepped engine. The underside of the car has been properly tended to since the restoration was completed with no visual evidence of structural compromise to the main frame rails, structural support tubes, suspension components, or aluminum main tub.

This is a wonderful opportunity to acquire a genuine, professionally restored, Lotus 7 Series II that has been thoughtfully maintained and moderately used since completion. With few owners and known history dating nearly back to new, this Lotus 7 has always remained under good care. Accompanying the car is a binder containing photos prior to restoration and during the restoration process, as well as invoices and correspondences outlining the work performed during this time. Although the car is presented in sound condition, we recommend that a professional shop with race preparation experience perform a complete inspection of the car before using it in a competition setting.