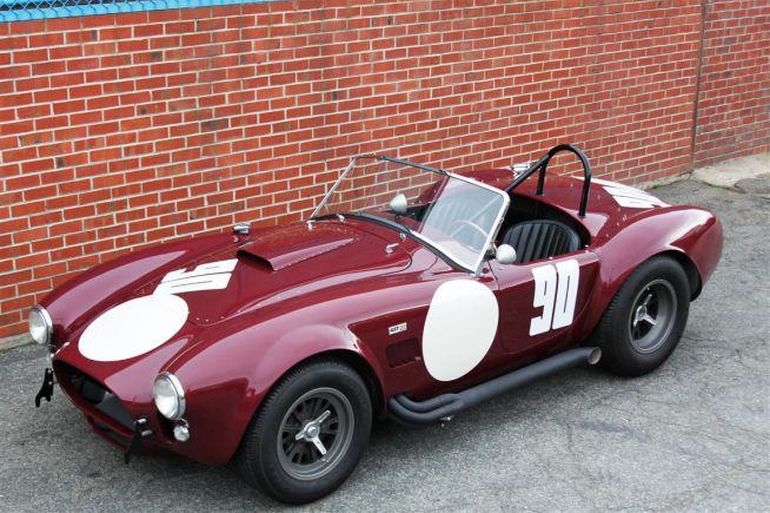 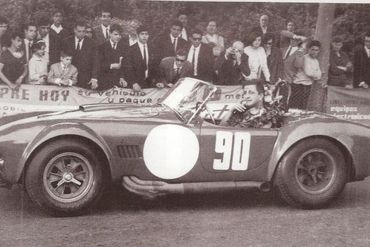 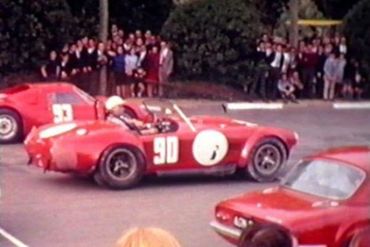 The story of the competition Cobras is a particularly illustrious and fascinating one that in many ways defines motorsports in the 1960s, which are often considered to be the golden age of sports car racing. The car played a central role in the early years of the Ford-Ferrari wars which escalated during the 1964 season, and eventually culminated with four consecutive wins of Le Mans and five consecutive wins of the World Sports Car Championship, the first of which was in 1965. The 427 Competition Cobra emerged in earnest for the 1965 season because it had become clear that the successful 289 Cobras could not reliably produce more than 400hp, a power level that would be needed to keep up with the Ferraris on the fast European circuits. Thus, the now famous 427 cid cast iron side oiler high riser motor was fitted (originally seen in the 1963.5 Galaxie), and produced 485hp easy in comp trim, and as much as 550hp when appropriately configured and tuned. The chassis was significantly revamped as well, with the notable change to 4-inch tubes from 3-inch tubes, which were placed 5 inches wider apart than on the 289s. The leaf spring suspension was replaced with a more modern coil spring setup. In addition to the hard fought wins on the international scene, the Cobra proved to be an unbeatable force in American Club Racing events, essentially from the Cobra’s introduction, and the 427 continued that pattern, with 1-2-3 finishes becoming essentially routine.

The 427 Cobra was available in a number of forms, ranging from the street trim version to the full on competition version. The comp cars had a single Holley Carburetor with “turkey pan” plenum chamber, aluminum cylinder heads and water pump, 12.5:1 compression ratio, lightweight valves, tubular headers, and straight pipes. The comp cars also had brass suspension bushings, anti roll bars, larger Girling brakes (with quick release mechanism to change pads in seconds), brake ducts, magnesium knock-off wheels, recessed large diameter fuel filler, roll bar, hood scoop. 21 competition 427 Roadsters were built, of which 4 were fitted with dry sump lubrication systems. The first production 427 Cobra was CSX3001, which was finished in late 1964, and this car, CSX3004, was the first customer comp car. It is one of the four cars equipped with dry sump lubrication, and also has some other unique traits as a very early production 427, including the 289 type dashboard and forward-braced roll bar.

The particular car was invoiced to Shelby American on the 29th of December 1964, and the Shelby work order was opened on the 11th of January 1965. The car’s completion was authorized for Francisco “Paco” Godia of Barcelona, Spain, who had ordered the car through a Mr. V. Casa of Ford of France in early December of 1964. Godia was an avid mortorsports enthusiast, racing a variety of cars starting in the late 1940’s, including a Maserati 250F, Ferrari 250MM, Pegaso Z102, Aston Martin DB4 GT, Ford GT40, Porsche 904 and 908, and this Cobra. The car was finished in maroon with white number balls, photographed at Shelby American’s California facility on the 12 of March 1965, and airfreighted via TWA to Madrid at a cost of $934.79, above and beyond the $9,950 paid for the car. The car was fitted with 6.5 inch and 8.5 inch Ted Halibrand wheels, and was supplied with an extra front and rear wheel. This car was raced in period in several events, including The Trofeo Juan Jover on the 9th of May 1965, which he won outright.

Following an accident during a race in the early 1970’s, which proved fatal for several spectators, the car was sold on to an owner in Switzerland, who repaired the car, painted it Guardsman Blue, and kept it until the early 1980s. The car then passed on to another Swiss owner, who sold it to an American owner in February of 1992. It was thoroughly restored to very high standards by Stauffer Classics in Wisconsin for an owner in Michigan, James George, who sold the car to a woman in Florida in 1997. In September of 1998, the car was flood damaged during a hurricane, and was immediately disassembled in its entirety and restored by Stauffer Classics in its original maroon livery at a cost of $84,316.11. The work took over two years, is thoroughly photo documented, and was completed in November of 2000.

The car was sold on to its current owner in 2002, who had the side oiler cast iron motor freshened in 2004, including a valve job, tuning, and dyno test, at a total cost of $7488.00. Additionally, an aluminum motor was built for and installed in the car in 2005, and it was dyno’d at 588hp and 540tq. The aluminum motor is currently installed in the car, and the side oiler motor is included and ready to install.

The car is currently in superb order, and displays excellent workmanship. The paintwork and bodywork were done to the highest standards and remain in very nice condition, with only a few small chips, a crack in the top of the right fender, and a star on the cowl. The chrome is excellent throughout, and the wheels have a dark finish that is purposeful and appropriate for a competition car. The tires are Goodyear of course. The lights and glass are excellent throughout, and the car has correct Lucas headlamps. The trim and badging are excellent throughout, and the car bears graphics which faithfully replicate the numbering employed by Godia when he raced the car, as confirmed by period photos. Other correct and unique details include the larger competition type fuel filler, and perhaps most unique, the external fender-mounted dry sump oil tank filler.

The interior has been beautifully restored and is fully trimmed with leather upholstery and full carpets, which are in excellent shape throughout. The correct Smiths gauges are in place and are beautifully restored, including the contra-rotating 180mph speedometer. A unique feature of the Comp Cobra that this car has is the absence of a fuel gauge. The cars were instead equipped with twin fuel pumps, one of which has a lower pickup point to indicate when the car is on reserve. The car has competition type lap belts and correct wood-rimmed steering wheel.

The engine compartment is spotlessly clean and detailed to show standards. It is largely correct and vintage in appearance, though there are some concessions to modern racing safety such as the discretely finished black braided stainless steel oil lines, and heat wrapped tubular headers. The trunk is Spartan, with no upholstery whatsoever, and is extremely clean. It is worth noting that the chassis number is stamped on the both door hinges.

This is an exceptional opportunity to acquire an extremely significant Cobra with fascinating and uninterrupted history. Not only is it among the few competition cars built, it is one of the four factory dry sump cars, and is confirmed in the Shelby American World Registry as the first production 427 Comp Cobra completed. The car has period racing history, and has been faithfully restored to its original configuration to very high standards. It comes with two complete motors, considerable spares, and with FIA papers, is sure to be accepted at the world’s most prestigious driving events.