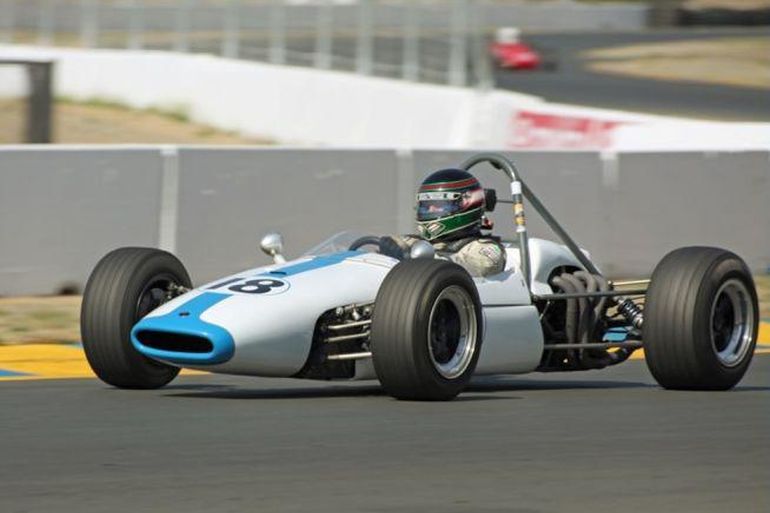 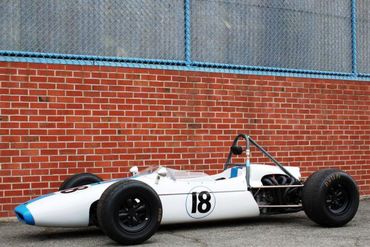 Low Hours on Engine Rebuild by Crowther, and Transmission Rebuild by Taylor Engineering. Documented History From the 1970s.

The Brabham Company, founded by three-time World Driving Champion Jack Brabham and genius racecar designer Ron Tauranac, built cars to compete in Formula I, Formula II and Formula III between 1960 and 1970. By 1960, Brabham was the world’s largest supplier of customer open wheel racecars. Jack Brabham’s 1966 World Driver’s Championship remains the only such achievement using a car bearing the driver’s own name. Racing under their firm name, “Motor Racing Developments”, in Formula II, one model won eleven consecutive races, while in Formula III their BT15 won 42 Races in the hands of future F1 stars. In the United States, in races sanctioned by the Sports Car Club of America, Brabhams ran in Formula C with 1100cc single cam engines, and even more successfully in Formula B (later known as Formula Atlantic) with 1600cc twin cam engines, a set of parameters nearly identical to Europe’s Formula II category.

This particular BT14 is a proven front running example, even against BT29s. It has low hours on a documented 1600cc Lotus Twin-Cam motor rebuild by Crowther, and documented Hewland Mk 9, 5-speed transaxle rebuild by Taylor Engineering, both North American experts for these cars. It is offered with documented history back to 1970-71, and considerable spares.

This car is believed to have raced in Europe early in its life although this portion of the car’s history is not conclusively documented. It was reportedly in France in 1965-1966 owned initially by Pierre Bardinon in 1965, and run by the Mas du Clos racing team in 1966. The car is also thought to have raced under the Red Rose Motors banner (owned by John Bridges) in the United Kingdom later in July 1966, where, according to Peter McFadyen’s book Motor Racing at Oulton Park in the 1960s, a BT-14 was driven by Brian Redman. The books states on page 84, “in July 1966 [Brian Redman], having had his second ever single-seater race earlier in the day, driving John Bridges’ Brabham BT14 to second place…” The car apparently raced at the 1967 Silverstone Club Season Opener and subsequently made its way across the Atlantic to Oregon, where it is believed to have been owned by Neil Hansen of Portland. The decisive documentation of the car begins in 1970 or 1971 when H.A. Sutcliffe (also in Oregon) purchased the car, He raced it locally until he sold it to Scott Raney of Springfield, Oregon in the late 1970s.

The car’s next owner was Louis Bentsen of Eugene, Oregon, who sold the car to a Paul Winters in Mountain View, California in August of 1989. Winters had John Buddenbaum perform an extensive and documented restoration on the car in the early 1990s and raced the car for the first time in 1993. He raced the car for the remainder of the 90s in local Northern California venues, including Sears Point, Laguna Seca, and Thunderhill, with sanctioning bodies such as SCCA, HSR, CSRG, and HMSA.

The car’s current owner is also a resident of the San Francisco Bay Area (Menlo Park) and bought it in January of 2001. He ran the car for approximately ten years, conscientiously maintaining and restoring it along the way. The 1600cc Lotus Twin-Cam motor was rebuilt by Tom Crowther in 2009 and has about 8 hours on it. It was dyno tested and made 187hp at 7500 rpm and 136 tq at 6500 rpm. Taylor Engineering rebuilt the Hewland Mk 9 5-speed transaxle in 2010 and it has zero time on it. Ron Chisholm set the car up in February of 2009. Other restorative work including new paint, new brakes, rebuilt instruments, and refinished exhaust system.

In 2007, Jeremy Hall (of ACCUS, the FIA authenticating arm) evaluated the car and spoke highly of its authenticity, a particularly noteworthy fact given that there are alternative claims to this serial number, which is not uncommon, particularly because Brabham is known to have used certain serial numbers more than once. Hall publicly described the car’s history on the 10 Tenths Motorsport Forum on page 10 of the BT-14 dedicated thread. The car’s roll hoop (included but not currently installed) has an early Northwest Region SCCA stamped number dating to the early 1970s, which further supports this car’s history, a particularly noteworthy piece of information given that the other two claimants to this serial number have history only as far back as the 1980s. The roll hoop is included with the car, along with a tech sticker from 1975.

Today, the car has very nice vintage racer cosmetics, with a high level of crispness and cleanliness. The paintwork is attractive and the bodywork has minimal damage, just a few small hairline cracks, which is common on fiberglass bodied vintage race cars. The chassis and suspension are nicely detailed, as is the engine and its ancillaries. The interior is equally well-done, with a period-correct feel, including leather-trimmed steering wheel and Smiths instruments. The belts are high quality Willans items.