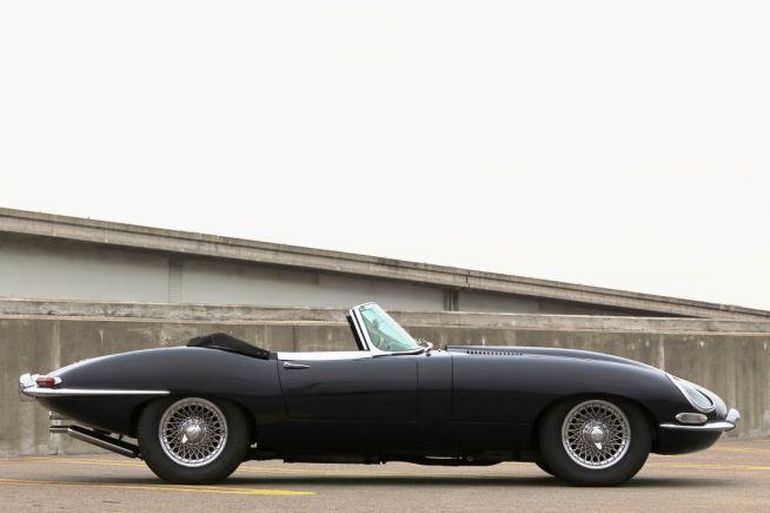 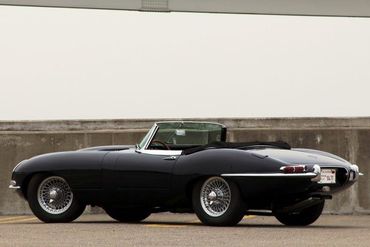 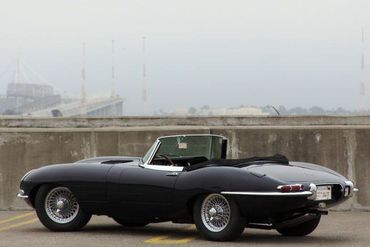 See this Jaguar start up and run.

The E-Type was unveiled in March of 1961 at the Geneva Motor Show, following the famous 11th hour disorder (one of the cars was driven to the show from England with just hours to spare). The car was an immediate sensation: its specification was state of the art, its bodywork arrestingly gorgeous, and the price surprisingly affordable. It embodied William Lyons’ values beautifully and it is no surprise that the E-Type has become such a legendary part of automotive history. The specification clearly demonstrated Jaguar’s racing experience and included independent suspension all around (at a time when Ferrari was still using live rear axles), disc brakes all around (inboard at the rear to reduce unsprung weight), and of course Jaguar’s legendary twin cam inline-6. The cars were continuously developed, with the addition of 4.2 liter engine and fully synchronized gearboxes for 1965. Later cars, particularly in the United States, had safety and emissions equipment that negatively influenced both performance and aesthetics, so these Series I 4.2 liter cars are widely considered to be the pick of the bunch.

This particular 4.2L Series I OTS is a matching numbers example, presented in its original delivery color of dark blue. It is a nice driver example in condition, and runs and drives well. Sold new in May of 1965 to a Mr. Harry A. Hodgins, it appears to have remained Stateside its entire life. In the 1990s the car saw considerable restoration work, primarily concerning the body and paint. According to documentation on file from Lippincotts Garage (specializing in Jaguars), both the engine and transmission were rebuilt as well, although we do not have the actual invoices for this work.

The paintwork has been done in lacquer to high driver standards over reasonably straight panels. The car displays good shut lines and even body gaps. The chrome is in very nice order, with just minor aging evident. It sits on sparkling chrome wire wheels which were new at the time of restoration, and are presently shod with near new modern Michelin tires.

The interior and top were also addressed during the restoration, and have a very nice driver presentation, in keeping with the exterior. There is one minor split seam on the driver’s seat cushion. The leather is of high quality, and has a similar feel to that which was originally fitted to E-Types, and is stitched in the original pattern. A new canvas top and top boot were fitted. The odometer shows 59,000 miles at present, which would seem plausible as the total original mileage.

The restoration work was done with the engine and transmission out of the car, and the engine bay presents beautifully. Correct finishes are applied to the airbox, heater unit, radiator overflow tank, and cylinder head. The valve covers and triple carburetors are nicely polished, yet not over done to a mirror finish. The underside is solid at this time, although the well-trained eye can detect the metalwork performed during the restoration process.

Included with the car are fairly detailed records for work performed between 1993-1998, and a photo documentary of the restoration, the matching wire wheel spare, jack, and hammer. The 4.2L Series I E-Types are very much the pick of the production run, especially for those enthusiasts with driving in mind. The all-synchro transmission, and more comfortable seats are definite pluses when compared to the 3.8L cars, yet they retain the attractive lines of the covered headlights, which certainly make them more desired and collectible than the Series II cars which followed.

See this Jaguar start up and run. 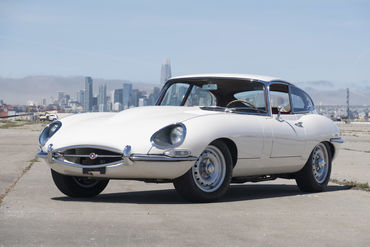