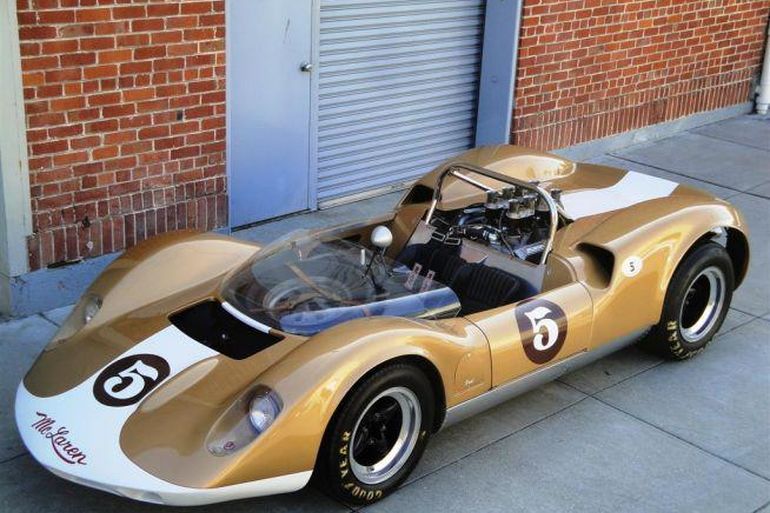 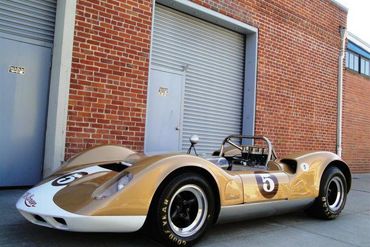 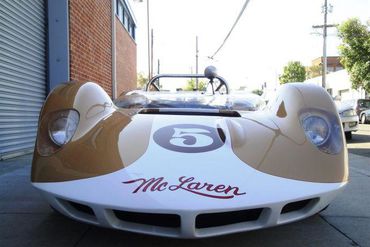 The M1A was Bruce McLaren’s first production car bearing his now legendary name. He designed the spaceframe himself, and powered it with an Oldsmobile V8. On its first outing at September 1964 at Mosport in Canada it proved to be the fastest car on the track, breaking the lap record seven times. The car raced throughout the 1964 season as McLaren sorted the car, while the car’s unique appearance and obvious speed meant that there was considerable public demand for the cars from privateers. Since McLaren’s company had only enough employees to look after their own team cars, they struck a deal with Elva to build customer cars. This was a particularly impressive feat since there were no schematics of the car and the only one which did exist was busy racing in America. Nevertheless, the first car (chassis number 01, this car) was completed in time for the 1965 London Racing Car Show, and eventually sold to John Coombs, the famous Jaguar dealer and racer. Graham Hill subsequently drove this car at the LA Times Grand Prix at Riverside, CA. Other M1As proved to be quite successful as well, winning at St. Jovite and Silverstone, both at the hands of Chris Amon.

This particular car, #01 was the London Show car, and was then driven by racing legend Graham Hill at Silverstone while it belonged to Mr. Coombs. Coombs sold the car to California racer Jerry Entin on the 11th of November 1965, and the car ended up playing a part in “Spinout”, a movie starring none other than Elvis Presley. He drove the car in the film, making this the only M1A driven by “The King”. Entin drove the car to the 1967 SCCA National Championship win, and eventually it ended up with a racer who bought the car in 1972, restored it, and raced it for many years, eventually selling it in 1996. It later became a member of the Mathew’s Collection and was beautifully restored to its gold Spinout livery in the late 1990’s. The car was run at the Goodwood Revival in 2000 and also driven by Lord March himself at the Goodwood Festival’s tribute to Bruce McLaren. The car currently has a Chevrolet 350 c.i. V8 with four Webers, which is the same configuration in which was run in the 1967 season, along with ZF 5-speed transaxle. The car was featured in the Matthews collection book in numerous photographs.

The car remains in excellent condition, with very nice race cosmetics. The paint is nice throughout, with no significant damage or wear other than a small area of cracking on the front end. The livery is the gold paint with white nose and number 5 that the car wore in Spinout. The wheels are very nice throughout and wear vintage style Goodyear tires. The interior is Spartan and tidy, and has full safety equipment as required of vintage racing including plumbed in extinguisher, power cutoff, and harness. Interestingly, the car has spare wheel and tire as was required in the early days of what would eventually become Can Am. The engine compartment and front compartment are both very clean and nicely detailed.

This is an exceptional opportunity to acquire a historically important and undisputed member of the Can-Am community. The car has outstanding provenance and would be a welcome entrant to virtually every prestigious historic racing venue in the world. As the first production McLaren, and having been driven by both Graham Hill and Elvis, this is surely one of the most important McLarens of all time. Cars associated with beloved stars often fetch several multiples of the values of standard examples, including those of Elvis. Indeed, his 1954 Cadillac Series 60 fetched $275,000 at auction in 2007, while a standard example is certainly worth less than $100,000. This car, however, is priced consistently with the historic race car market, and thus represents an outstanding value given its terrific and irreproachable history. 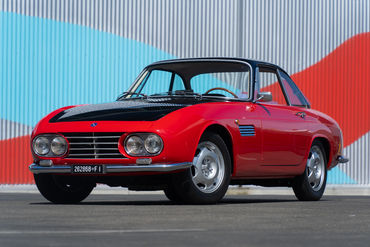 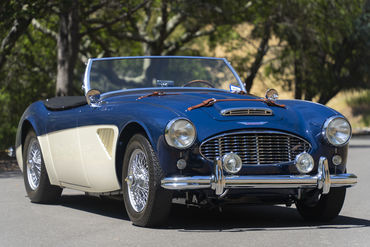