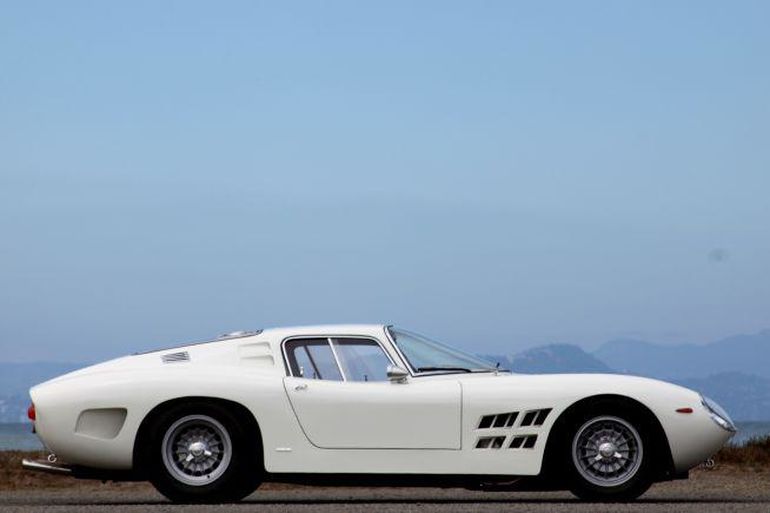 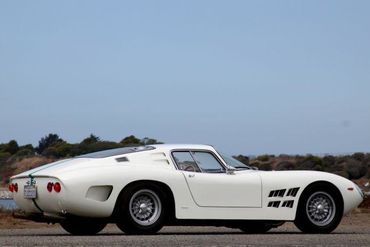 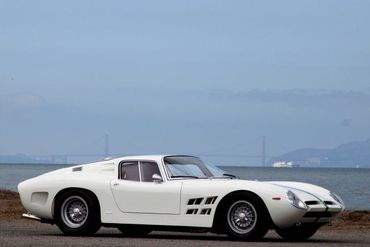 A Stunning Continuation Built by the Original Craftsmen Who Made These Cars. Outstanding in Every Regard.

The Grifo is perhaps one of the most stunning, attractive, and desirable takes on what would eventually become a proven formula: a European chassis and body coupled with the robust and inexpensive performance provided by an American V8. When designing his beautiful and impressively fast Iso Grifo, Renzo Rivolta relied upon one of Italy’s greatest automotive engineers, Giotto Bizzarrini, who designed the Ferrari 250 GTO and Testa Rossa. Mr. Bizzarrini designed the Iso Grifo with the necessary elements for success: the stout, reliable and easily tuned Chevrolet small-block V-8 engine and 4-speed gearbox from the Corvette, a welded-sheet platform frame, sophisticated suspension and a svelte and aerodynamic body. Although it was double the price of a Corvette, it was significantly lighter and featured technical innovations that even the most exotic cars of the era could not better. The resulting car was a true race car for the road that looked the part, with the roofline standing a mere 43\" above the asphalt.

The Grifo’s chassis and mechanical integration were also major contributors to the overall appeal of the car. Developed in large part by Giotto Bizzarrini, in tandem with the Grifo’s competition version (which would eventually become the Bizzarrini 5300), the chassis was sophisticated with coil springs all round, de Dion rear end, and tubular chassis, and inboard rear disc brakes. The engines were supplied by Chevrolet, but were disassembled and blue printed before installation in the Grifo.

Giotto Bizzarrini built his own version of the Grifo for racing, winning the big-bore GT class at Le Mans in 1964 and 1965. The Bizzarrini GTs were developed as race cars and the two marques, Iso and Bizzarrini, coexisted. Iso built road Grifos while Bizzarrini built racing Grifos. Eventually their relationship soured but Bizzarrini had cleverly registered the Grifo name, reportedly the suggestion of Nuccio Bertone, and traded its use to Iso for a supply of parts sufficient to build about 100 Bizzarrini 5300GT Stradas. Fitted with more rakish and exotic bodywork, the Bizzarrini 5300GT is rare, exotic and aerodynamic. Early competition cars were designated Grifo A3/C prior to being separately identified as Bizzarrini 5300s.

Historians and enthusiasts of the Grifo and Bizzarrini 5300 are well aware that these cars were built in fits and starts over the years as parts became available to various enterprising individuals, and therefore there are often multiple claims to serial numbers and confusing trails of construction and ownership history. Faced with spending seven figures on a car of dubious history, the owner of this car ultimately selected a different path. He was made aware by Winston Goodfellow, one of the pre-eminent gurus of these cars, of a “continuation car” built in Italy by Roberto Negri, a former employee of Iso when these cars were originally built, and now the owner of il bottegone, a shop that maintains and restores these cars.

This car was one of five such cars built by Negri, a project on which he embarked about eight years ago. Using genuine Iso chassis and the original scheda (essentially blueprints), the cars are exceptionally accurate, down to the centimeter, and were built by the same individuals who built them when they were new. Indeed, Piero Rivolta gave his approval to officially name the cars Iso Rivolta A3/C and they are built using period correct parts. This particular car was built using the chassis, motor, and other components of an original Iso Rivolta needing restoration that was purchased from Gullwing Motorcars and shipped to Italy for its transformation. It was completed about 4 years ago with superlative attention to detail and accuracy and the result speaks for itself. It is a truly stunning and exciting car that accurately captures the aesthetic and driving experience of an original car, available for a fraction of the cost.

Suitably convinced by the car’s experience, its current owner, who is an enthusiastic collector of European sports cars, bought and imported the car to the United States.

Cosmetically, it is not only indistinguishable from an example built in period, it an absolutely beautifully built and finished car. The quality of the workmanship is first rate throughout and the car’s competiion details are beautifully rendered from the external rivits to the large cooling vents and quick release fuel filler that operates through the rear window. The paint is excellent, as is all brightwork, glass, lights, and trim. The car has vintage Carello headlamps and the overall presentation is of a show-ready freshly restored high caliber example done to the highest standards.

The interior is equally impressive, and showcases the craftsmanship of the build as well as if not better than the exterior. The quality of the trimming and finishing is superb, from the abundant red leather to the high quality pile wool carpets with red binding. The unusual instrument layout which places the primary instruments to the driver’s right has been failthfully recreated and the car has a full suite of period instrumentation. The simple padded central tunnel is beautifully trimmed and dominates the cabin, giving a single-minded competition-oriented purposefulness to the interior, which is underscored by the fixed rake bucket seats. The interior is fully trimmed, with carpet, leather, and full headliner, all of which are in superb order. The wood rimmed steering wheel has one scratch in the finish but is otherwise essentially unmarked.

The engine compartment presents like new and is technically fascinating. The engine is mounted well back in the chassis, with the back of the motor actually slipped underneath the cowl. There is a sizable gap between the front of the motor and the front crossmember and this space is thoughtfully filled with various mechanical components including the brake boosters (to keep the hood low) and battery. This layout and the car’s stunning proportions underscore that this may very well be the ultimate iteration and evolution of the front-engined sports car before the transition to a mid-engined layout was adopted by the foremost producers of exotic cars. The engine compartment is nearly spotless, again consistent with a fresh build to the highest standards and few miles since. The trunk is fully trimmed and surprisingly large, with space for plenty of luggage, a full sized spare, and an integrated tray to house the jack.

The driving experience is very exciting. The car is very low and the view from the driver’s seat is extremely evocative thanks to the unusual gauge layout, steeply raked windscreen, massive center tunnel, beautiful fender contours. The dashboard finish is a bit too glossy and creates glare on the windscreen. The engine starts easily and has a ragged raw character to the exhaust note, but is surprisingly subdued in the interior. It is well-tuned and tractable, with a surprisingly civilized character. The clutch is aggressive and very communicative, but still quite manageable for street use. The gearbox is a pleasure to use with well-defined gates and good synchromesh. The brakes are effect and the low, wide dimensions of the car give it sure-footed handling. All in all, it is an exciting car that make any drive feel like an occasion, but it is still streetable enough to drive for pleasure or use for tours.

This is an exceptional opportunity to acquire a beautifully turned out and very thrilling car. The driving experience and aesthetics of the car are extremely faithful and the quality of the build is truly remarkable. The car is just exciting enough on the street and perfectly encapsulate the purity, directness, and excitement of a truly great classic car experience. The car also represents excellent value, and as such, makes a superb event car that can be enjoyed more freely. It is built on a genuine Iso chassis and is titled as a 1966 Iso. 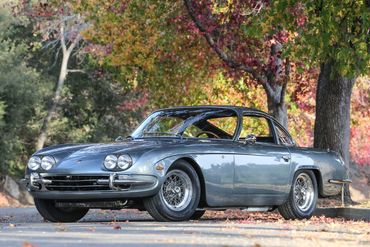 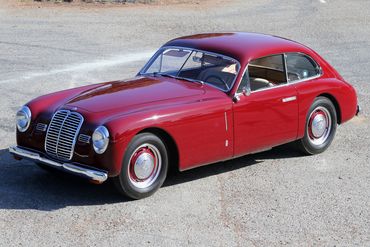