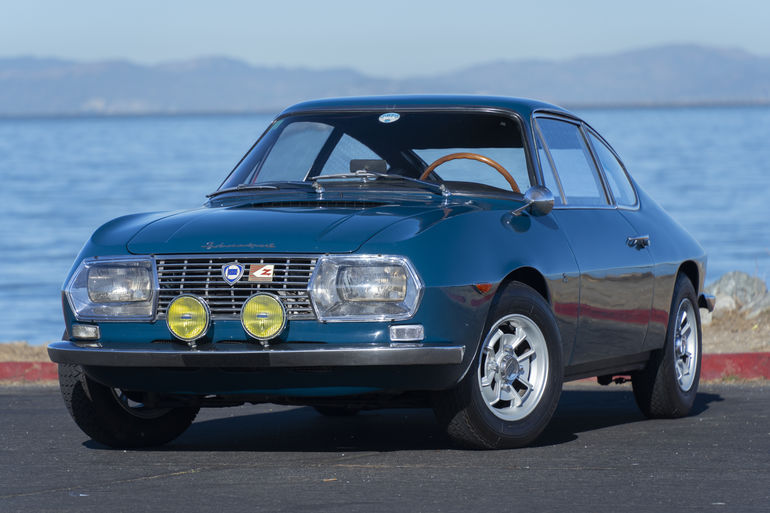 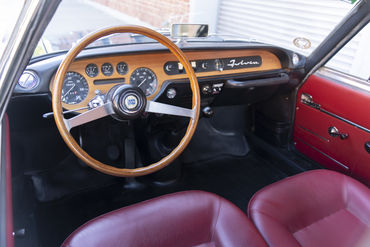 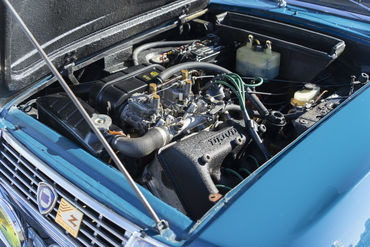 Features of This Example

Among the last of the pre-FIAT cars, the unibody front-drive Fulvia was designed with a dual overhead cam narrow angle common cylinder head V4 engine. Dunlop disc brakes on all four corners provided stopping power, along with a host of further technical features. In 1967, Road and Track magazine described the car as "a precision motorcar, an engineering tour de force". The Fulvia was surprisingly quick for its displacement and proved to be formidable in both rally and circuit racing. The rare and special Zagato coupe bodywork, available in limited quantities, provided excellent visibility and a surprising amount of space for larger drivers. The first of the Zagato series cars were hand formed with all alloy construction with 1.2L engines. This lightweight combination and handmade quality make these earliest examples the most sought after today.

With an unbroken chain of known ownership beginning with the original owner, Oscar nominated film editor Hugh Lloyd, this Sport Zagato was manufactured in 1966 and first registered to Llyod on plate TI3132 January 16, 1967, a resident of Turin, Italy. Per his order, the car was outfitted with UK instrumentation, and later Lloyd had Dinitrol rustproofing applied to the chassis, fitting a set of 5 FPS alloy wheels, which are still on the car today. A car enthusiast, Llyod was a member of the Automobile Club D’Italia, announced by the Roma division windows sticker still on the car today.

On February 3, 1970 Llyod imported the car to the UK, registering it on export plates EE43470, later registering it on EPE199J. In 1983 Llyod sold the car to Goodwood racer Chris Gawne who updated the engine to the more desirable 1.3L variant outfitted with Dellorto carburetors. The car changed hands a few times before it came into the collection of BaT enthusiast Alex_V who offered it for sale on BaT in February 2015 https://bringatrailer.com/list... At that time, the car showed 99,000 miles, the majority of which were accrued under Lloyd’s ownership.

Today, this Sport Zagato presents in very attractive condition with glossy paint applied over handsomely finished aluminum body work. The chrome and various trim are all in very good condition, particularly the exceptionally hard to find grille and chrome plated headlight bezels along with the rare plastic headlight covers. A pair of bumper mounted Carello driving lamps are also in place, likely period mounted, as earlier photos show the car with chrome caps over the bolt holes. The lenses, glass, and delicate “Fulvia Sport” script across the hood announce both the Italian heritage and design excellence, while Zagato coachwork badges confidently flank both front fenders. The desirable later series cast alloy wheels were added in period and today are in excellent shape, adding a sporting period-correct enhancement to the car, giving it great stance. Many of these cars often sit a bit high in the rear, however the stance in this example is visually satisfying, giving the car just the right amount of forward rake.

The color-contrasting interior is excellent overall, reupholstered in correct red with appropriate headliner and rear carpet treatment done in high quality materials. The low-profile bucket seats are in excellent condition with comfortable bolsters and good side support. The door panels and headliner are in very nice condition. The wood dash trim is properly finished, housing the correct instrumentation, clock, and rare radio delete plate with Fulvia script. The gauges and controls feature nice color and contrast, excellent trim, and a correct Lancia badged wood rim steering wheel. The correct ribbed and fitted rubber floor mats are similarly nice as is the rubber booted shifter. Lifting the rear hatch, the storage space area is nicely finished and properly trimmed with space for soft weekend luggage. Additionally, the rear hatch can be electronically raised and lowered via a dash switch, allowing cabin ventilation – among one of the more notable innovations of this model. The spare tire is accessed via a drop-down rear fascia body panel and contains a matching alloy wheel, spare tire hold down, jack and partial tools.

The car runs and drives well, starting easily, revving freely, and shifting smoothly. The disc brakes are very effective for this period and the chassis has a nice coherent and comfortable feel that is perfectly suited for mountain roads and spirited driving. The Fulvia is known for light and communicative steering, delivering precise and responsive results – certainly one of the top characteristics of this model.

This is an excellent opportunity to acquire a rare, technically interesting, and entertaining classic Lancia Sport Fulvia with unique all alloy hand formed Zagato coachwork. Extraordinarily rare in the United States, Fulvias have robust US based parts and service availability and can be easily serviced by mechanically minded enthusiasts, making them ideal usable vintage sports cars with unique construction, satisfying performance, and exceptional design traits.

Included with this car