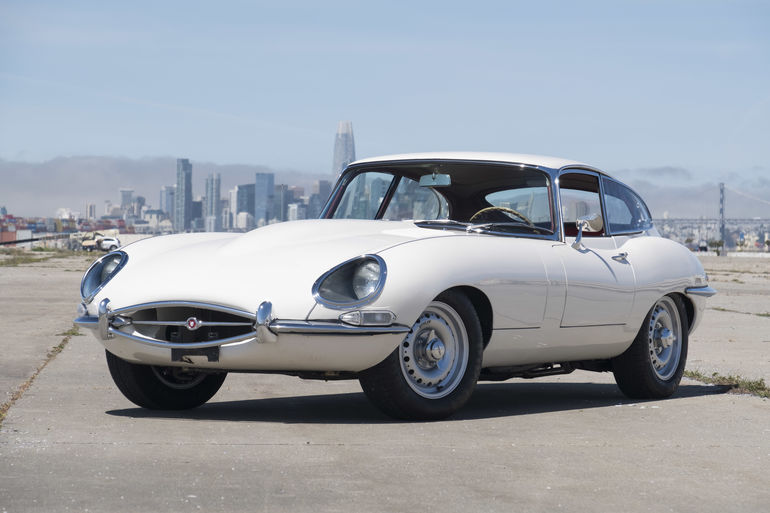 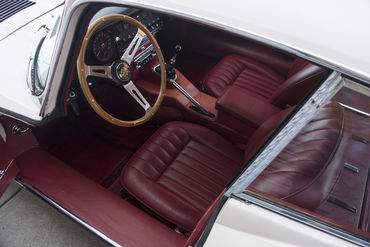 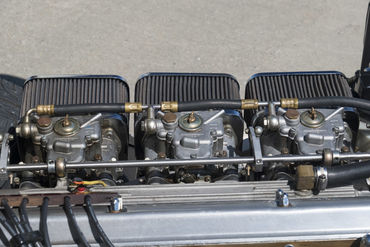 Unveiled at the 1961 Geneva Motor Show, the Jaguar E-type delivered a totally new approach to sports cars. Stunning design, unrivaled performance, and racing lineage made the E-Type an immediate sensation. With its beautiful lines and surprisingly affordable price, the E-Type garnered its iconic status where it continues to reign at the top of collector and enthusiast lists. Independent front and rear suspension, disc brakes all around (inboard at the rear to reduce unsprung weight), and Jaguar’s legendary twin-cam inline six-cylinder engine were just part of the allure. Sales were brisk with growing interest in both American and European markets. Although the E-Type would continue into the mid 1970s, enthusiasts today remain steadfast regarding their admiration for the Series 1 models as one of the most beautiful and capable sports cars ever conceived.

In the 1980s, this car was offered at the Barrett-Jackson Auction, AZ. Viewing cars that day with Bruce Trenery, proprietor of Fantasy Junction, Emeryville, CA, Bob Cole (Cole European Motors) inspected the car together, but the car remained unsold at the auction. Eventually, Cole approached the son-in-law of the original owner and privately purchased the car. After modest use, Cole sold the car to renowned Ferrari collector Brandon Wang, a fan of originality and preservation. In 2003, Wang arranged for a trade and partial payment on a Ferrari with Bruce Trenery. Recalling his former ownership, Trenery notified Cole who purchased the car for a second time. In 2005, Cole embarked on a series of professional performance modifications to prepare the car to a very capable road going standard while retaining as many of the original features and general character of the E-Type as possible.

Having been preserved and maintained through the early years of its life, this E-Type was showing approximately 27,000 miles when it was prepared by XKs Unlimited under commission from the consigning owner, who then spent upwards of $50k on the car to rebuild the engine to a high level of performance, in preparation for vintage driving events. The shop prepared the engine with extensive performance components including Venolia pistons, Carrillo rods, performance cams, alloy flywheel, performance damper, a big valve conversion, an alloy radiator, Weber intake manifold and carburetors, a new fuel rail, and an electronic distributor. Both the original head and original block were sent out for professional machine work to the surfaces and bottom end. During this time the front seats were removed, stripped of the old foam, and the frames refinished. New foam was installed, along with new red leather for the seats, while the remaining interior including the original carpets were retained, cleaned, and conditioned. Other work included the installation of a new windshield, a new retractable-type radio antenna, new inner workings for the clock, and the front suspension was rebuilt with new poly bushes, new ball joints, solid rack mounts, and heavy-duty front and rear sway bars.

Continuing with the updates to the mechanical systems a stainless-steel exhaust system was installed from the headers back and a set of Dunlop bolt-on hub alloy wheels were fitted. A 5-speed gearbox was fitted to the rebuilt engine and a new clutch, throwout bearing, and lightened flywheel were installed. Other improvements included GAZ rear shock absorbers and new coil overs, and four piston Wilwood front calipers with drilled and slotted discs.

Today the overall exterior is very satisfying with a very handsome mixture of original finishes and sensitively updated features. The finish shows typical areas of use including stone chips, slight paint discoloration to the blended paint areas, and minor stress cracks, notable only upon close inspection. The lighting, lenses, and glass appear very clean and preserved throughout. The body integrity is sound, with good panel gaps on the rear hatch, and bonnet, while the door fit appears quite good especially considering the originality of the body. The chrome window and side glass surrounds are in very good original condition overall, remarkably so being original to the car. The front and rear bumpers are very nice as are many of the rubber gaskets throughout the car. The Dunlop wheels feature chrome plated knock offs with excellent finish and add a sporting presence to the elegant design.

The red leather interior is original with the exception of the seats, which were professionally restored and recovered in 2005. The original carpet is in remarkably nice condition. The dash pad is in very fine shape indicating that this car must have enjoyed indoor storage throughout even early life as there is no evidence of sun damage. The instruments are beautifully preserved with excellent faces and contrasting color. The original door panels, matching covered door sills, headliner, and rear storage area are quite nice in both condition and material quality, again preserved and saved from the elements. Although the seats have been re-upholstered, the leather has matured just enough over the past fifteen years to now feel very much in keeping with honest and harmonious appearance of this E-Type.

The engine compartment is correct in appearance and properly detailed. The Weber carburetors are a nicely balanced feature of the engine without appearing out of character. Both the engine numbers are evident and matching as is the “picture frame” support section bearing the correct chassis number, both of which correspond correctly to the data plate affixed to the car. The undercarriage appears clean, tidy, and very much in keeping with the stated miles. The body seams, weld lines, and joinery are further indicative of original construction while modest updates appear properly performed without modification to the original integrity of the car.

The car is accompanied by an original owner’s pouch, operating manual, dealer listing manual and maintenance voucher book, an original jack, jacking bag, knock-off hammer, a complete set of tools and tool roll. Also included with the sale is a set of floor mats and two copies of the fold-up Jaguar E-Type Maintenance Chart.