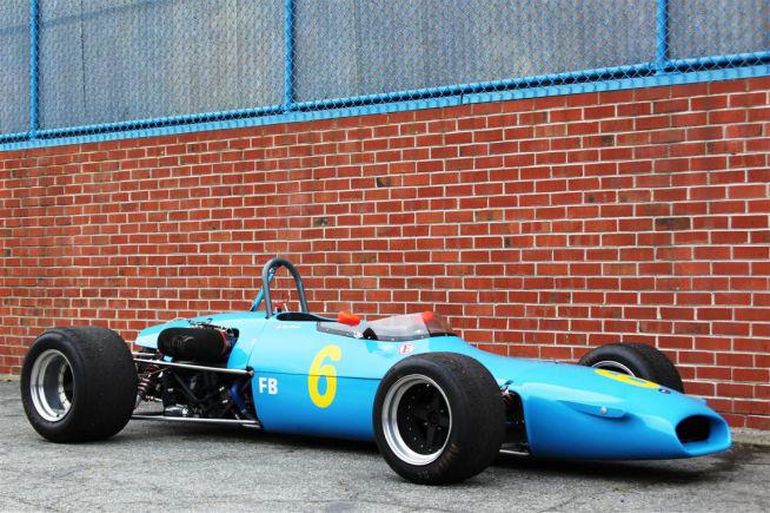 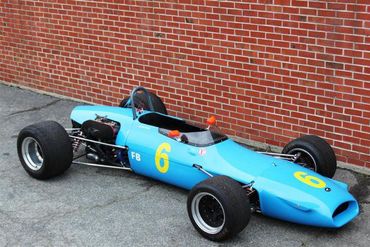 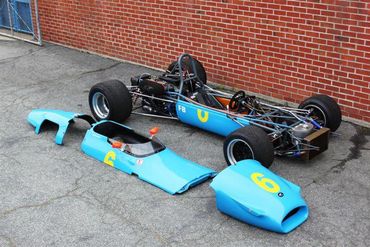 The Brabham Company founded by two-time World Driving Champion Jack Brabham and genius racecar designer Ron Tauranac built cars to compete in Formula I, Formula II and formula III between 1960 and 1970. By 1960, Brabham was the world’s largest supplier of customer open wheel racecars. Jack Brabham’s 1966 World Driver’s Championship remains the only such achievement using a car bearing the driver’s own name. Racing under their firm name, “Motor Racing Developments”, in Formula II, one model won eleven consecutive races, while in Formula III their BT15 won 42 Races in the hands of future F1 stars. In the United States, in races sanctioned by the Sports Car Club of America, Brabhams ran in Formula C with 1100cc single cam engines, and even more successfully in Formula B (later known as Formula Atlantic) with 1600cc twin can engines- a set of parameters nearly identical to Europe’s Formula II category.

This particular car is a US delivery example, destine for competition in the Formula B series, and delivered new to Doug Brenner. After competition in period, Brenner sold the car onwards to Ron Phol, a west coast based twin-cam engine expert of the day, who sold the car to William Summers. Summers notes successes against the newer Marchs and Chevrons, campaigning s/n BT-29-45 mainly in regional SCCA races at Elkart Lake, Brainerd, Blackhawk Farms, and Rockton in the early 1970s. Bob Mijolevic purchased the car from Summers and competed in SCCA autocross events, evidently at one time with Mazda rotary power.

In the mid 1990s the car was owned by Cy Morland, who had commenced a ground up restoration, including a chassis overhaul by Marc Bahner. In 1997 the current owner purchased the car from Mr. Morland, and completed the restoration in progress to original specifications with a Lotus based twin cam engine and Hewland FT200 transaxle. The current owner is a figure head in the West Coast vintage racing community and has participated with s/n BT-29-45 in over 60 historic events.

Today the car displays excellent racing cosmetics. 7.6 hours have been logged on the Bill Schlossnagel built Lotus twin cam engine with twin 45 DCOE Webers. The car has competed in just one race weekend since it was taken down to the chassis and freshly powder coated. All systems, bearings, and rod ends were checked, and if not within spec, replaced. All internal transmission parts have been replace during the current ownership period, and the rear axles have been updated with sliding units such that you can remove the transaxle at the track without removing the rear suspension. New Colman rotors were installed, the brake calipers have been updated to AR Mk. III units with internal crossover, and new uprights were fabricated at the time of the restoration.

Accompanying the sale of the car are logbooks going back to the early 1980s, sales advertisements from William Summers, communications with previous owners, and this enormous spares package:

The Brabham BT-29 offered here represents the most advanced, developed, and competitive of the Formula B cars produced by Brabham, or for that matter, virtually any of other manufacture of the period. It is eligible the world over for many prestigious historic events, and is arguably the best chassis from a golden period in formula car history.