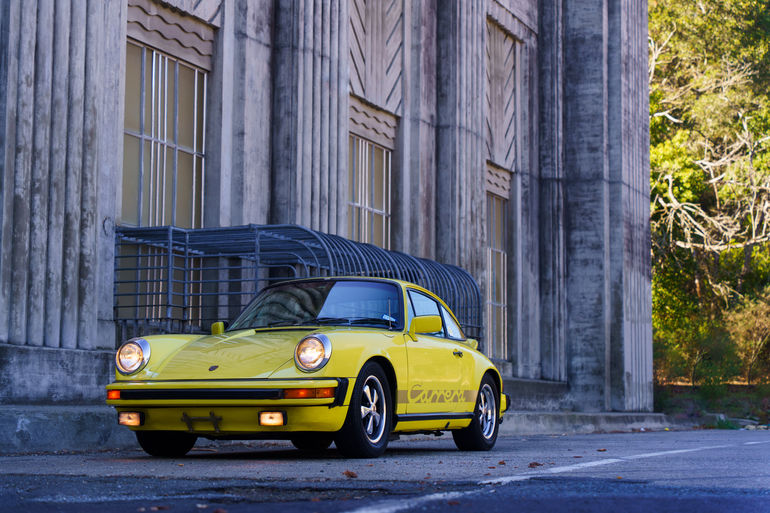 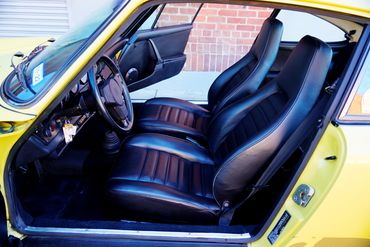 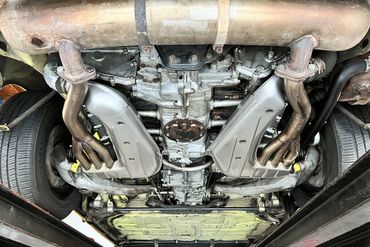 Bring a Trailer NO RESERVE auction in progress: US Delivery '74 Carrera updated with rebuilt 3.0L engine and presented in period appropriate light yellow.

In addition to mechanical improvements, visual changes included updated body designs featuring new U.S. crash-impact bumpers designed by Wolfgang Möbius, who thoughtfully integrated the larger bumpers without compromising the classic 911 bodylines. Other improvements included strengthened floor pans and revised lighting. The Porsche Carrera model expanded on the 911S performance lineage with the exclusive Carrera moniker that has since become legendary in racing and performance circles. Built from August 1973 through July 1975, the 911 Carrera was available with either the “Burzel” or “ducktail” rear spoiler, the “whale tail” spoiler (in 1975), or with no spoiler at all. Contemporary press swooned over the new Carrera reporting remarkable performance figures and genuinely composed road manners – a combination that had previously eluded so many other sports car competitors.

This example was ordered new from Northwood Porsche/Audi, San Antonio, TX with a list of desirable options, including the following:

The first owner, listed as Newell Manufacturing, is named on the bill of sale, and original purchase paperwork included with the car. Years of subsequent service documents, identifying Kathryn Newell as the owner, extend from the late 1970s though 2015, remaining in San Antonio during her 40 years of ownership. In 1978 the 2.7-liter engine was rebuilt, though the invoice copy on file with the car does not indicate mileage at the time of rebuild. Subsequent invoices follow with services leading up to April 1993 with 24,670 indicated on the service invoice the front suspension pan was replaced, alignment performed, a new battery tray and new battery installed, front and rear shocks replaced, and a new gas tank support was installed. In April 1994 with 31,961 miles indicated on the service invoice, te car was towed to Jones’ Autowerks and an auxiliary oil cooler was installed, a 2.7 head replaced including valves and guides, and compression tested. In 1994 with 34,778 miles shown on the service invoice, the 2.7-liter engine was removed, and a 3.0-liter engine installed. The FI unit, ac brackets, exhaust and other components were transferred to the new engine. In 1995 a pair of electric side view mirrors were installed. In 1997 with 45, 597 miles shown on the service record, the 3.0-liter engine was rebuilt. In 2015 the car was sold to the second owner, also a resident of San Antonio where the same service shop (Jones Autowerks) continued to perform maintenance and repairs on the car. By 2018 the car was sold to the third owner, a resident of Amherst, MA, returning again to Texas in 2020 where the fourth and current consigning owner, an Austin, TX resident has continued to maintain and service the car.

Recent services of note include replacing the CV boots, new sunroof seals, and the installation of a factory short shifter in 2015. Two new axles were installed in 2018. Under current ownership, in 2020 the wiring harness was repaired, sunroof panel removed, cleaned, lubricated and adjusted, and the fluids drained and refilled. In December 2020, a new set of exhaust manifolds were installed along with new heater boxes and 12 new manifold studs. At this same time, the AC compressor was also sent out and rebuilt, the clutch adjusted, and the headlamp/turn signal switch replaced. In September 2021 a Retrosound stereo was installed with a pair of Fosgate speakers, a side view mirror repaired, a correct Porsche VDO clock installed, the rear defroster repaired, and the (upgraded) power side view mirrors were serviced.

Today this Carrera presents with 92,845 miles indicated, which are believed to be 192,845 miles based on the service invoices indicating work typically performed on Porsches with more than 100k miles. The paint is generally smooth and glossy with minor road chips noted on forward facing surfaces, various paint blemishes on the bumper surfaces. Paint imperfections include a small paint bubble on the roof, a small ding on the driver’s door, a minor area of touch up on the driver’s door, and surface corrosion appearing at the lower passenger side windshield gutter. rubber gaskets and seals, very good anodized window trim, factory fog lamps, and handsome Fuchs wheels shod with contemporary radial tires. The chrome headlight trim and the distinctive rear duck tail spoiler are two key elements that uniquely define this series Carrera. The glass, body trim, emblems, lenses, and Carrera side lettering remain in very nice condition. The overall visual condition of the car is cohesive and ready for enjoyable driving. As is common for 200k mile road cars, we believe some bodywork was performed in the battery storage compartment and the rear-most section of the engine bay.

The black interior features correct details all of which appear to be largely original and consistent with the documented history since new, with the exception of the seats which are not the original material. The working air-conditioning, power windows and sunroof complete the handsomely preserved interior. A modern radio and speakers have been installed. The carpet shows some signs of age but, here too consistent with the general condition overall. The front storage compartment contains important factory stampings and numbers, and an original space saver spare tire.

Under the hood, the 3.0-liter engine and engine compartment are in good condition throughout. The engine bay remains generally stock retaining emissions equipment and optional air-conditioning components with air conditioning that blows cold. The undercarriage is as you might expect from an unmodified car with typical signs of age to various components and no significant damage to the floor or support structure. The recently replaced exhaust and heat exchangers are in excellent condition.

Driving is especially rewarding given the extra power offered from the 3.0-liter engine. The gearbox is smooth and enjoyable given the short shifter installation. Throttle response is very good, cornering is very nice with tight and responsive steering, and the revs come on smoothly in all gears delivering that captivating mid-series 911 air-cooled sound.

This Carrera is accompanied by original tools and tool roll, the original 911 Carrera owner’s manual with VIN card and service stamps, and a folder containing numerous service records dating back to 1978 including the original purchase invoice for the car.

This Porsche 911 Carrera with rare factory installed A/C, power sunroof, and other desirable options has been documented and enjoyed by the original purchasing long term owner and three recent caretakers. With refined road manners and highly desirable options, this Carrera is ready for shows, events, and enjoyable performance driving. 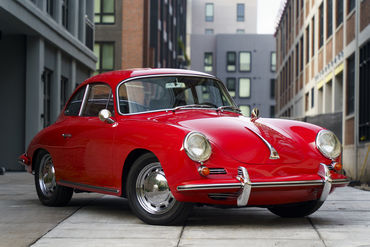 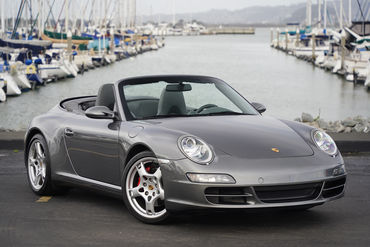