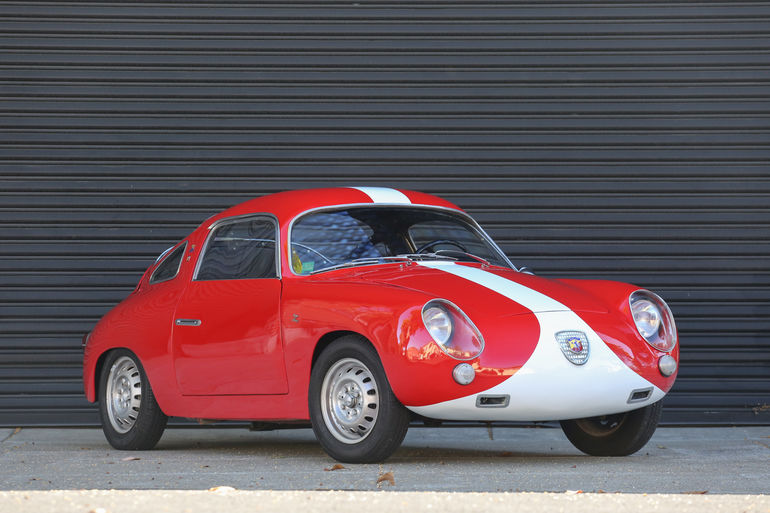 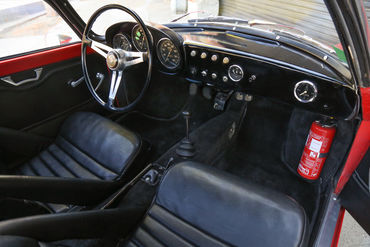 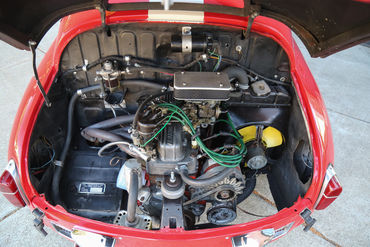 Production for the 750 Zagato established Abarth as a capable builder offering handsome vehicles in a surprising array of varying body styles. Available in a range of body styles with different trim and features, each of these cars were uniquely constructed by hand. The 633cc in-line four-cylinder Fiat 600 engine was modified to yield 747cc, nearly doubling the former output to a robust 44hp. This improvement, combined with the lightweight alloy body, resulted in a spirited car capable of performance features that rivaled many other cars in this class. A later series engine would be offered using an Abarth specially made twin-cam head, known as the “Bialbero”, generally delivered with cars destined for racing applications. These capable cars surprised everyone as they gradually dominated international racing circuits and North American SCCA events in the under 1-liter class. Available in either Stradale or Corsa configuration, these handmade cars were understandably expensive, notably more than a contemporary Porsche 356. As such, production was limited and, while factory documentation for production numbers remains scant, the few remaining documented examples today are always sought after for their originality and unique construction.

This particular example has previously been attributed to ownership of the Italian racecar driver Ernesto Prinoth, founder of Prinoth AG, makers of snow grooming machinery and other track-driven vehicles. At this time, although records of Prinoth's ownership have yet to be confirmed, evidence was found in the car that suggests it may have been either serviced by Ernesto Prinoth's garage or that Prinoth was involved in preparation of the car under private ownership, and that the car may have spent some time near Bolzano. In any case, there is ample evidence of Prinoth’s Abarth racing history and his knowledge of these cars certainly could include his participation, given his experience in racing. The car also appears to have featured "1000" markings on it, which implies that it may have received a 1000cc engine at some time.

While further records confirming the early history of this car remain ongoing, paperwork accompanying the car confirms that it was registered in April 1959. In John de Boer’s The Italian Car Registry, chassis number 577 535 with body Z47 is listed as having been manufactured April 20, 1959. And while there are no confirmed documents supporting an early racing history, the car itself contains many Corsa features including the front disc brakes, slightly different suspension, and an additional transmission oil gauge, all of which are features found on Record Monzas with period racing history. As such, upon viewing the car, some experts have suggested, though not confirmed, that this may have been a former Abarth Works car, which might have participated in the Mille Miglia, Targa Florio, and Coppa Sant Ambrosius in 1959.

Recent ownership history includes a transfer on June 27, 2012 from Jobst Heemeyer, Osnabruck, to Federico Vitto, Rome. At the time of Vitto’s purchase, the car was finished in bright yellow but remained in remarkably original condition including retaining all the original glass. Under Vitto’s ownership a FIVA card was acquired and a European-based restoration undertaken with completion in 2016. The restoration included finishing the car in the current red and white livery, reportedly configured as the conjectured Targo Florio entrant. During the restoration much care was taken to retain as many of the parts that remained on the car and are believed to be original, including careful attention to the Zagato body, rebuilding the original Zagato seats using original type seat frames, and overhauling of the original instruments, retaining their dial and trim patina. Photos showing the bare alloy body attest to the remarkably sound condition of the alloy prior to paint, revealing many unique features of Zagato construction. The car was then sold to a new owner who offered it for sale via public auction. The current and consigning owner purchased the car at auction in much the same condition shown today. 2020 services performed on the car included removing the oil pan and pump, inspecting the main bearings, changing the oil, repairing the fuel gauge, replacing the tachometer cable, and general adjustments as needed.

Today this Abarth genuinely reflects the clever engineering and simplicity so wonderfully reflective of the Abarth aesthetic. The closed headlight configuration, red and white competition livery, and purposeful stance delivers a vivid image of Italian racing heritage. The sloped roofline, streamlined glass, and gaping engine cover reflect the true nature of this competition-oriented design. The paint is glossy and smooth throughout with good panel presentation, reflective of rally or road racing cosmetics. Typical of period alloy coachwork, the door edges appear proud of the fitting surface in various areas along the rocker panels. Generally speaking, coachwork of this era, having been entirely fashioned by hand, will reflect these variances as part of the history of the car.

The craftsmanship achieved during the restoration is a cohesive balance of original patina and improved cosmetics. There are minor areas of use evident in the finish, but none of significance so as to detract from the overall presentation. As seen in the restoration photos, the original glass was carefully removed during respray and reinstalled with new gasket material. The headlight covers are clear and uniformly shaped, properly fitting the alloy scallops. Further details include the artfully shaped Abarth center grill trim, alloy lever-actuated door handles, cast wheels, and iconic Zagato “Z” coachbuilt emblems.

The interior is a fitting combination of racing and road car appeal showing areas of use and patina from many of the original features. The Zagato style seats are trimmed with black material, displaying signs of use along the side supports and carpeting with wear marks inside the driver’s footbox. While the interior is generally spartan in nature, the lightly yellowed instruments speak to the originality of the finishes, giving the car a competition flavor and a distinct Italian beauty even in the small details. And while the overall condition of the car reflects joyful use, there is much to appreciate in the honest nature of the presentation and raw materiality still evident in this example today.

The engine bay features a more reliable replacement single cam engine with generally clean components and sound mechanical attention. Although the original engine is reported to have been a Bialbero unit, the engine current engine finishes are generally correct and accurately specified, focusing on originality, but also showing signs of enjoyable use and recent servicing as needed. The forward trunk compartment features a spare Abarth cast wheel, a correct type fuel tank, and battery, along with a scissors jack and jacking tools.

The underside of the car is in keeping with the general history of an enjoyed car showing correct type finned aluminum oil pan casting and correct suspension components. The overall finish, while not detailed or cosmetically prepared, presents an honestly driven car. The chassis appears to be in sound condition at this time.

Driving this Fiat Abarth is a reminder of how clever performance engineering and design changes can radically improve a car. The rear mounted engine greatly benefits from Abarth tuning, with wonderful sounds and peppy acceleration. The responsive engine delivers surprising performance for such a small package. The gearbox is easy to shift. Braking is typical for cars of this period but delivers good response even under repeated use. The driving experience is well balanced and will certainly bring a smile to anyone who appreciates vintage Italian sports cars. Eager to please and capable of many miles of enjoyable motoring, this Abarth 750 Record Monza will continue to entice a wide range of collectors and motorsports enthusiasts as a charming addition to any collection or as a singular object of motorsports enjoyment.

This Fiat Abarth Record Monza delivers all the qualities one seeks in a drivable, historically important, and rare sports car, delivered in a compact performance package. This wonderful example is an excellent example for enthusiasts who enjoy driving events, local car shows, or tinkering on their own cars. With its unique Zagato coachwork and innovative rear-mounted engine, this highly desirable Record Monza truly conveys the legacy of the Abarth scorpion - small and unsuspecting; delivering a powerful sting.

Please note this example is sold duty paid in the US, on a Montana title in transit.