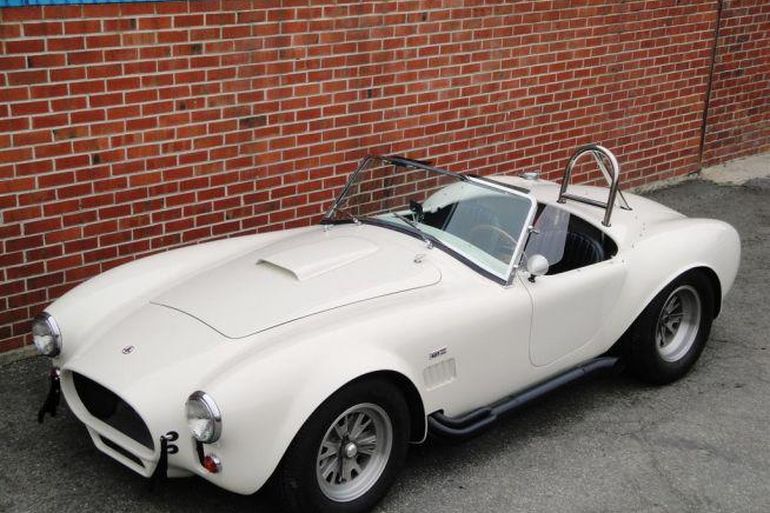 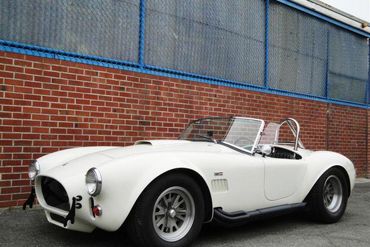 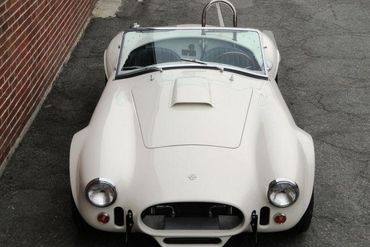 When AC lost their supply of Bristol and later Ford six-cylinder engines, it appeared that they would have to stop building the Ace, whose lightweight attractive aluminum body and sophisticated chassis and suspension made it in many ways the quintessential British sports car. At the same time, Carroll Shelby had recently retired from motor racing and was running a driving school and selling Goodyear tires, but wanted something more exciting. Having always wanted to build his own sports car, he approached the various Detroit manufacturers and was eventually offered a small lightweight eight cylinder engine by Ford from their pickup truck line. Aware of AC’s predicament, he approached the management with his inimitable flair, and the Cobra was born. The bodies were built by the AC factory in the United Kingdom before being shipped to the Shelby American’s Southern California factory. Initial impressions of the car, which was still in bare aluminum, were extremely favorable. Following its first competition outings, the bugs were gradually ironed out, and the car proved to be a durable, quick, and extremely capable car. The rest, as they say, is history, and the Cobras, in 260cid, 289cid and 427cid versions (bearing CSX3000 serial numbers) went on to achieve tremendous racing success, in addition to becoming culturally ingrained as one of the greatest and coolest cars ever made.

Consequently, the original 427cid cars are worth in excess of $600,000, making high quality technically identical replicas a very attractive proposition for those seeking to enjoy the legendary performance and aesthetic of the original Cobra, without the uneasiness or colossal expense of a 3000 serial number car. Today, Shelby American still exists, producing “continuation cars”, which closely replicate the original cars, and bear CSX 4000 serial numbers. Being built by the company that built the original cars, these new CSX 4000 cars are extremely accurate, particularly when properly equipped with correct details such as aluminum bodies, and components from the original suppliers such as Girling and Lucas.

This particular car was built to replicate a 427 S/C in a no expense spared fashioned by a Shelby historian and restoration expert who has done several original cars. There is an exhaustive list of correct details, and this car was built to replicate an original as closely as possible. The sole exception is the use of aircraft hardware throughout the car. Every bolt critical for safety and or reliability is an American-made aircraft bolt with aircraft nuts and washers, specified for proper grip length. All spaces and bushings have been hand-fabricated on a lathe for perfect fit, and the care in its entirety required many many hours of hand fabrication.

The car has covered 317 miles since its completion, and as a result, it is in stunning cosmetic condition. Finished in white with a black interior, the car has an understated period appearance rather than the traditional guardsman blue, which tends to yell “replica”. Additionally, the exhaust is flat black, and the wheels were carefully finished to replicate the period finish rather than being too shiny or bright. The paint and bodywork are immaculate, with a very high quality paint job and fit and gaps. The restorer who built the car proudly reports that the entire body required less than 4 ounces of filler. The chrome, glass, and lamps are also in excellent like new condition, and the car has Plexiglas wind wings with “Cobra” etchings.

The interior is equally nice in condition and execution. The dashboard has the correct Smiths gauges including anticlockwise rotating speedometer, as well as the correct type switches and indicator lights. The steering wheel is also correct in appearance, as are the upholstery patterns. The leather upholstery and Wilton carpets are high quality and display excellent workmanship. The car has competition type lap belts as well.

The engine compartment is spotless and largely correct in appearance, save for the large aluminum radiator. The relays and other electrical components have a vintage appearance not often found in recreated Cobras, and the entire engine compartment is nicely detailed. The trunk is Spartan and contains the remote fuel filter with braided cloth hoses.

This is an outstanding opportunity to acquire an extremely correct Cobra built by Shelby American. It is like new in every way, and demonstrates outstanding attention to detail, craftsmanship, and performance. The color combination and finishes are wonderfully subtle and the car is ready to be enjoyed at a small fraction of the cost of an original Cobra.