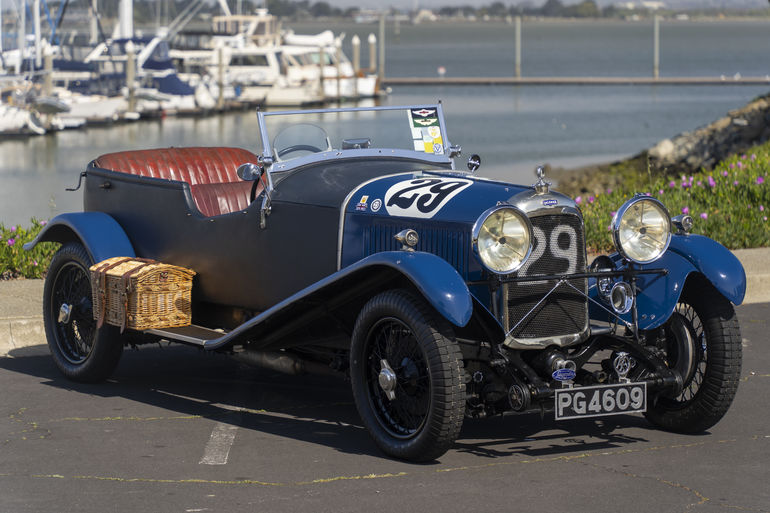 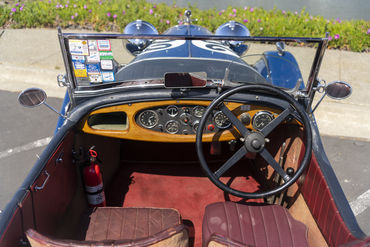 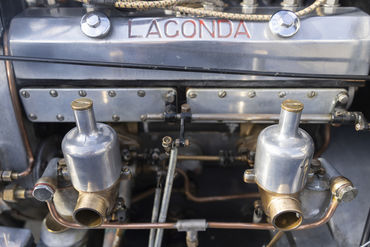 Among the most celebrated and historically important pre-war motorcars, Lagonda stands as a critical pilar of automotive engineering poised at the dawn of exceptional motoring. With their stately presence and performance capacity, these durable steeds were immediately recognized as formidable chariots for both wealthy clientele and sporting enthusiasts. Founded in the UK in 1906, the first series sports model Lagondas arrived in 1925 with the newly developed twin-cam 1,954 cc four-cylinder, five-main bearing crankshaft hemispherical chamber engine. This robust combination captured both power and reliability in this “Two-Liter” offering. Concurrent with the development of this sporting engine, the “low chassis” body design gave the car more of a sporting appearance, one suitable for more vigorous road use and quite capable of competition participation. The unique body design was crafted at Lagonda under license from Weymann who held the patent for lightweight aircraft coachwork. Weymann also found this process to be effective for car bodies, allowing Lagonda to apply the Weymann body system of construction using structurally jointed wood framework with stretched fabric for the body skin. The obvious weight savings over metal was a big advantage in competition settings. Lagonda took advantage of this with their competition vehicles both supporting privateer racers and championing their own entries to prominent victories.

This wonderfully prepared Lagonda has a history of long-term ownership dating back 40 years under the care of the same dedicated owner/enthusiast and lifelong champion of prewar Lagonda cars. His ongoing commitment and passion for the preservation of this and other rare Lagondas is delightfully evident in every aspect of this car.

Delivered new in 1929, this Lagonda departed the factory wearing a coachbuilt body. The body is known to have been on the car in 1930, but for reasons that remain a mystery, the body was removed in the early 1930s and fitted with the current body, fitted for more than 90 years. The current owner located the car while living in the UK and purchased it in 1982. He enjoyed racing it in various British events when, in 1984, he, his family, and the car moved to Northern California. Having used the car for both family outings and shows, he found it to be ideally suited to vintage racing. The car was prepared for vintage races and tours, combining family events with motoring venues that would eventually total participation in well over 80 events. As a testament to both Lagonda performance and the passion of dedicated stewardship spanning decades of consistent Monterey Historics and Reunion participation, including a Rolex Cup (2010), this Lagonda has surely achieved beyond even the founders’ dreams of cross continental excellence as it approaches the rare milestone of nearly a century of motoring enjoyment.

A performance car at heart, the remarkable balance achieved when the car was first constructed resulted in each of the wheels balanced at 750lbs on all four corners. Power from the original twin overhead cam engine has been preserved first in the capable rebuild performed in 1988 at Phil Reilly’s shop, by Jim Strandberg. The engine ran beautifully for many years, and such was the confidence in Strandberg, that in 2018, the owner commissioned Strandberg, now in Colorado, to rebuild the engine again. The engine was rebuilt with new cams, the crank was properly ground, new pistons installed, and the rods crack tested. The entire running gear was balanced and assembled with proper testing. The engine, outfitted with a magneto, was fitted back in the car, and mated to the gearbox, which Strandberg had also rebuilt using a more modern multi-plate (Lagonda Club) clutch allowing far more effective shifts that the original unit. As part of the more recent mechanical refurbishment, new ball ends were installed, the steering box was rebuilt, new brakes were installed, and a new set of Rudge-Witworth Coventry wheels and Blockley tires were fitted.

Today this bespoke and sporty Lagonda delivers a wonderfully authentic visual experience coupled with mechanical excellence. The beautifully aged coachwork has been preserved and restored as needed with a flowing front fender line that drapes back from the upright grille and large headlamps flanking the fabric covered body. The elegant long wheelbase and low chassis deliver a powerful presence beguiling the near 100-year age. The finishes are consistent and proper for a car that has dutifully served the interests of its custodian both as a powerful and capable motorcar and an ambassador for the importance of preservation. Polished details include, antique “diver’s helmet” taillights, a copper tail pipe, chrome knock offs, and a folding louvered hood. The fabric body is in excellent condition terminating at the cowl where the hood encloses the capable twin-cam engine fronted by the distinct Lagonda grille and perched headlamps. Of particular interest, a clever engineering feature allows the chassis, cable pulleys, and suspension to be lubricated via a centrally located chassis mounted plenum easily accessed without having to crawl under the car. This is particularly beneficial as regular lubrication provides a great deal of improvement in the suspension ride quality.

The interior has been warmed by time with much of the surfaces remaining original. A thoughtful combination of various restored leather areas has been finished with a matching patina for continuity with the original leather. The quality of the interior is enhanced by numerous details including wood door thresholds with Lagonda etched metal plates, a commanding four-spoke steering wheel, and multiple instruments arrayed in the wood dashboard. Hand lever controls, solid single pane windscreen and single Brooklands style racing screen, and multiple windscreen decals depicting just a few of the many vintage racing events this car has completed in the near 40-year history of participation.

Unlatching the dual levers on each side of the centrally hinged hood, the magnificent twin-overhead cam engine reveals a delight of engineering, complete with dual carburetors, and elegantly crafted details. The Lagonda engine is a wonder of mechanical excellence offering a beautiful series of magnificent castings, hand formed parts, and copper and brass fittings. The finishes are gently aged with mechanical integrity to the racing heritage of these great cars. The original matching numbers engine has beautiful presence enhanced by authentic finishes, mechanical details, and refined craftsmanship from dedicated mechanical artisans. The original identification plates, engine stampings, casting marks, and chassis number are correctly presented on the various components in the engine compartment, all of which support the originality of this rare Lagonda. The undercarriage displays parts and components consistent with original construction, correctly finished features, and proper care with finishes reflective of enjoyable use. Every aspect of this car embodies the power and precision when originally created at Lagonda and since celebrated by the exceptional stewardship from a dedicated long-term enthusiast. Truly the integrity and originality are representative of a car that has been lovingly enjoyed yet remains poised for continued vintage events under new ownership.

The car starts via an easy procedure, cranking rhythmically before erupting into wonderfully warm, mechanical sounds and a gentle idle. The engine benefits from a 2018 refresh following specifications that allow excellent performance using no special fuels or unique needs, indeed the owner proudly boasts “driving it often even as a family car”. The manual gearbox is easily engaged in part due to the updated clutch, allowing this impressive automobile to pull very well in all gears while delivering a noble and engaging experience that delights all senses. At higher speeds, the chassis is surprisingly refined, with excellent visibility, in part due to the low-chassis design sporting ample seating for several adults. For those unfamiliar with prewar cars, braking and gear selection requires some familiarization but after a few glorious miles of engagement, the mechanical experience results in an unforgettable drive. The car is accompanied by a series of spare parts including a steering wheel, misc. accessory parts, spare original type clutch parts (should the next owner wish to return to the original type clutch), an spare cylinder head, the original convertible top and top irons, a set of engine gaskets, portions of the original leather seating material, spare yardage of replacement carpeting, various spare gauges, gears, steering parts, a box of multiple Lagonda club magazines, various Lagonda books, a box of trackside spares, knock off hammer, hand crank rod, and a spare magneto with wires.

Wonderfully conceived for sporting driving and lovingly preserved by passionate enthusiasts, this Lagonda delivers all the majesty and motoring pleasure offered in this legendary marque. This phenomenal expression of preservation and mechanical mastery is ready for its next world-class touring event, vintage racing gathering, or simply to fill the running board mounted picnic basket and escape via backroads into the idyllic countryside.