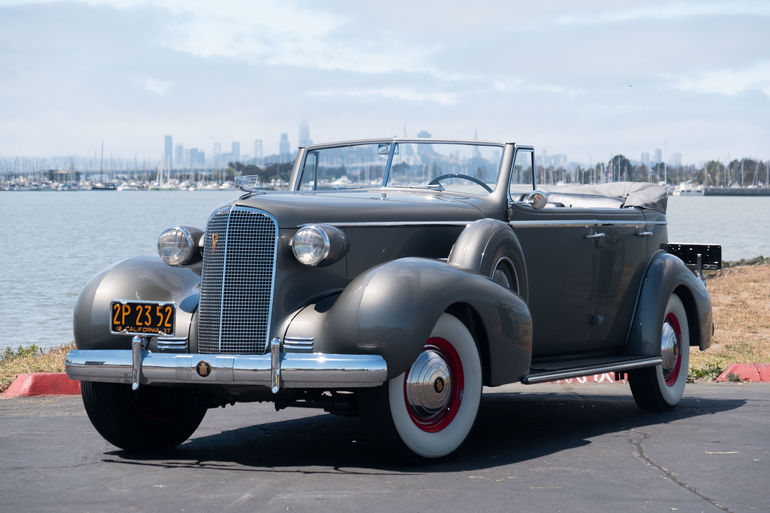 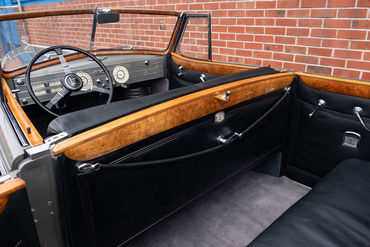 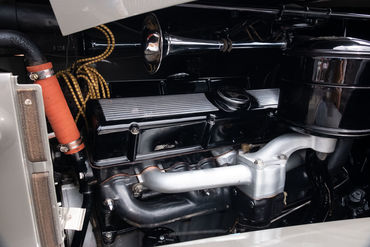 The 1930s was an era of contrasts. Having exited the catastrophic market collapse and survived The Great Depression, by the mid 1930s Cadillac emerged with new offerings adorned with the opulence and style of the waning Art Deco period, leveraging the design philosophy of the emergent Streamline Moderne era. The automobiles of this era blended body and fender work into smooth forms with clean lines and delicate trim. Among the most coveted and powerful examples of this era, the Cadillac V12 series sedans and convertibles became the sentinels for American style and grace. Essentially hand built cars available under special order, the V12 and V16 were simultaneously developed as part of the industry rush to achieve powerful multi-cylinder engine cars.

Offered from 1931-1937, both Fisher and Fleetwood offered semi-custom bodies outfitted with beautiful interiors, stunning coachwork, and performance that was competitive with any of the top European marques. For the final two years of the series, the V12 became known as the Series 80/85, but by 1937 the Series 80 was dropped and the remaining 138” wheelbase Series 85 would become the last of the V12 Cadillacs built. A total of 478 cars were built in 1937 with a mere 20 convertible sedans built that year.

This example is number 13 of the 20 cars constructed in 1937. Believed to have been delivered to residents of Northern California, the car remained with the first owners for many years before being sold to the second owner, also a resident of California. The third owner, a highly respected, award winning classic car enthusiast and multiple classic car owner, sold the car to the current owner in 2010. At that time the car remained entirely original with all original body panels, the complete interior, and most importantly, the original V12 engine. The current and consigning owner studied the car for some time before deciding to perform a comprehensive authentic restoration. The owner and his wife knew this would be a passion project and committed to a cost-no-object restoration.
The entire car was disassembled and carefully evaluated with experts to determine accurate finishes, period correct details, and correct materials. Handmade details, faux wood painting, specially made rubber trim for the running boards, and careful machining performed on the massive V12 engine were just a few of the many challenging aspects of this restoration. Every detail was studied and refined including matching the original black leather interior which had survived so well on the rear center armrest, it could be used to match the seven hand-selected leather hides with matched grain to the original interior. Upon completion of the interior, the original center armrest was in such good condition, it remains in the car today.

Cadillac V12 experts from all over the country were called upon to perform details on each of the many parts including re-enameling the horn button and re-chroming virtually all the bright work on the car. With all the body panels removed and new welting installed, a new convertible top was fitted, and the body was primed and painted in the original silver color, matching color sections from the car that had been preserved in between the original fender welting. The engine was rebuilt, painted, and finished with correct details, and reassembled carefully by hand, much in the same way the original construction had been performed 75 years ago. Since the restoration was completed, the car has been refined, maintained, and modestly used by the family for various gatherings and local events.

Today this stunning Cadillac presents as a beautiful example of this impressive V12 series. The fascinating and beautifully delineated Fleetwood coachwork is not only evident in the exquisite Harley Earl design, but also in the refined craftsmanship delivered in all aspects of the restoration. The steel-bodied factory coachwork is finished with gorgeous period correct silver paint with just the right amount of metallic flake, accented by red wheel rim color, white wall tires, and gleaming chrome wheel covers. The chrome hood ornament is a beautifully sculpted streamlined design, flanked by dual side mounts and suspended headlights echoing the tapered teardrop shapes of the fender line. The combined presence and power are evident in the commanding 216” length and spacious 138” wheelbase. The fluid fenders and stately running boards create a wide stance that is beautifully proportioned to the four-door design. Even with the top up, the roof line is low and clean. With the top down, the majestic, parade quality of the car is very refined as all the side glass vanishes and the smooth body lines are accented by the perimeter chrome trim. The stunning original square chamber mesh grille is itself a work of art, beautifully adorned with the V12 emblem delicately trimmed with brilliant chrome accents.

The interior is exceptionally fine, benefitting from hand selected black leather upholstery specifically chosen to match the original rear seat center armrest, remarkably still retaining the 1937 factory material. Everything about the interior is mesmerizing. From the exquisite Art Deco inspired instruments, dash-panel design, and delicate trim. Tastefully and accurately restored to the highest standards by experts selected for skills in these areas, one need only view the extraordinary hand paint faux wood work performed on interior garnish molding to appreciate just one aspect of the superlative craftsmanship revealed in this refined and elegant interior. Further examples of crafted artistry are revealed in the hand enameled steering wheel emblem, the rear cowl clock, the heater housing, and delicately shaped door handles. The lasting impression is one of power and grace - a fitting tribute to the achievement in the daring original construction and world-class engineering, beautifully captured with contemporary restoration excellence.

Lifting the centrally hinged hood, each side of the potent 368 cu. in V12 engine is a delight of authentic finishes, machined excellence, and impressive engineering from an era that delivered prestige, durability, and opulence. The engine has a beautiful and refined presence enhanced by mechanical details, chrome plated trumpet horn, beautifully finned valve train covers, and correct fabric wound, lacquered ignition wires feeding the twelve cylinders in sequenced harmony. The engine bay is also finished with a high level of refinement including the correct metal identification tags. The engine number, used in this series as the chassis number, is stamped in the correct location. Handsomely restored and consistently finished throughout the cowl, inner side panels, and front frame rails, the engine compartment conveys the integrity representative of a comprehensively restored car worthy of any top level concours or museum display.

A quick turn of the key delivers a wonderfully smooth, evenly balanced, and almost undetectable V12 idle. First gear selected; this impressive automobile effortlessly moves forward in a stately manner as you command steering over the beautifully contoured hood. Once underway, the ride is very rewarding, impressive, and surprisingly easy going. Driving a car of grand presence, you might expect the ride to be lumbering or demanding, but the steering is quite refined. The large steering wheel allows for easier maneuvering and while the length takes some time to get used to, after a few miles, the ride, composure, and delight settle in. For those unfamiliar with prewar cars, braking and gear selection will take some practice, but once familiarized, the resultant driving experience is greatly rewarding when driving an American classic both of historic import and uncompromised elegance.

The underside of the car is clean and tidy, though not fully detailed for show. Most importantly, there is no evidence of structural compromise on any of the frame members or suspension components. The underside body work is clean and the various drivetrain castings are in excellent visual condition.

Great cars from the Streamline Moderne era are generally sequestered to museum exhibits or captive collections. To find one of this quality, provenance, and correct restoration is a rare treat. As more and more generations of enthusiasts are discovering, cars of such commanding distinction can be captivating examples for show or enjoyable use. This beautifully restored Cadillac V12 delivers an impressive and timeless design combined with one of the most innovative engines of the era. With its captivating beauty and historic acclaim, this uniquely designed American classic is a stunning ambassador for anyone who wishes to arrive in style imbued by the elegance and grace from another era.