Among the most beautifully constructed automobiles ever conceived, the Alfa Romeo 6C 2500 occupies a unique and special place in the history of coachbuilding and automotive excellence. Having built cars of premier construction and world class engineering, Alfa Romeo engaged the finest artisans and craftsmen with the sole objective of building handmade automobiles to an impossibly high level. In 1923, the great Vittorio Jano had established his prowess as a genius engineer, unveiling the six and eight-cylinder engines that would become legendary to the Alfa Romeo name. With amazing power and reliability, races were won, but at great cost. In 1925, just one year after constructing their first straight eight engine for Alfa Romeo, they won the very first World Championship. Though praise and acclaim were in order, Alfa Romeo was operating at fiscally unsustainable levels of perfection. The foundation of Alfa Romeo as an industrial leader teetered on financial ruin. In 1933, state recovery orders were put in place to save the company, giving the powerful Italian government control over Alfa Romeo.

Fueled by national vigor and bolstered by unlimited government funds, Alfa Romeos of this era were opulent, highly refined, and emblems of Italian pride and technology. Vehicles of bespoke construction were now outfitted with the finest in coachbuilt bodies, stunning interior treatments, and luxuriant appointments befitting royalty. The 6C 2300 and 2500 were offered in variations including the Super Sport, the premier offering of the 6C configuration. The dual overhead cam engine was the perfect fit in the 2,700mm wheelbase independent suspension package which was light years ahead of the typical sold rear axle chassis platforms of other manufacturers. The combination of sophisticated engineering, reliability, and stunning handmade coachwork offered customers the very best in sport-oriented motoring.

Unlike typical cars of this period that required a great deal of attention, demanding driving skills, and physical strength, the Alfa Romeo 6C 2500 was light, supple on rough roads, and delightfully nimble on a variety of terrains. The triple Weber carburetors and broad powerband delivered a robust 110hp with top speeds well beyond the capability of most skilled drivers. In the hands of top drivers competing in motorsport events, Alfa Romeo campaigned both the 2300 and 2500 to high acclaim achieving an impressive string of top finishes including 1st and 2nd in the 1937 Mille Miglia, 1st, 2nd, and 3rd in the 1937 6-Hour Targa Abruzzo, Pescara, and pressing on after the war with an overall win at the prestigious 1950 Targa Florio.

Among the most desirable of the 6C models, the 2500 “Super Sport” 2,700mm short wheelbase model is an enduring statement of opulent pre-war design and coachbuilding excellence transitioning both periods with hand crafting and emergent post war technology. Offering Alfa Romeo engineering excellence coupled with Touring Coachwork, the sporting elegance of this rare configuration earned the eye of the first known owner, famous rally driver Eugenio Lubich, Triestre, Italy, who acquired the car in 1948. During the first years of his ownership, Lubich successfully competed against some of the most capable cars of the era, including Maserati A6GCS, Ferrari 250 TdFs, and Lancias to name a few. The list of his documented races includes:

March 22, 1952 - Corsa Sulle Torricelle (VR) 4. Classificato categoria GT
On September 29, 1953, the car was sold to Italian aristocrat and renowned rally driver, Count Innocente Baggio, known by his faithful admirers as “Dodo”. His racing pedigree included participation in the Mille Miglia, Targa Florio, Le Mans, and other top-level races at the wheel of Ferrari 375MM, Alfa 6C race cars, and others. Among his numerous entries, Dodo was known to have shared racing duties with driving partner Porfirio Rubirosa, a colorful gadabout of great acclaim both on the racetrack and when accompanied by ladies of the Hollywood elite, frequently seen closing many a Parisian night club.

In 1954/55 the car was exported to France where it was purchased by US Army Sergeant First Class Milford, with the paperwork executed by US Army Platoon Sergeant Stone, stationed in France. With finance documents secured through GMAC, Switzerland, Sergeant Stone rather overzealously took to the wheel of the powerful Alfa causing some mechanical issues that sidelined the car. Although it remained unusable when Milford took possession, he eventually paid off the loan. Stone, feeling some sense of responsibility, secured the much-needed parts for the car, which were routinely available by 1956, and the glorious 6C was once again running. With the engine serviced and the car returned to capable use, Milford drove it throughout France, eventually shipping it in 1957 to North America, eventually located in Pennsylvania. At that time, the car was in running condition and reportedly painted grey.

With a record of ownership spanning nearly 50 years, Milford retained the car until 2013, when it was sold to the current consigning owner who dispatched the car to Italy where it underwent a comprehensive eight-year restoration, performed to an exceptional level involving consulting experts from around the world covering all aspects and details of the car. Restored to the original dark green exterior and matching green leather interior colors, while remarkably still retaining the original engine and gearbox, it is one of just 75 models built from the 1939-1943 period of production, a rare subset of the total 458 6C2500 Super Sport models built in total production.

Today this Alfa Romeo remains as a stunning piece of automotive artistry ready for enthusiastic ownership as it continues to delight and astonish even the most familiar collectors of rare coachbuilt Italian cars. The finishes throughout are exemplary in every respect. Just as the traditions of fine Italian craftsmanship were applied when first built, Italian artisans have once again proven their exquisite skills with the restoration performed on this rare Super Sport. The patented Touring Superleggera coachwork is an elegant expression of the closed coupe configuration, enveloping passengers in hand shaped lightweight alloy construction of the finest order.

Having benefited from a comprehensive restoration that addressed every part and piece of this beautiful car, the restoration was handled with great care to preserve as many of the rare original parts and handmade features that make up this stunning example. Having been preserved for many years in safe storage and under long-term ownership, several beautifully preserved original items were cleaned, reconditioned, and returned to the car. Both the front and rear license plates are original to the car, assigned in Italy and matching the “Estratto Cronologico'' which records the full Italian history until export in the 1950s. The beautifully made steering wheel and center emblem are original to the car, as are the original grill, bumpers, fog lamps and taillights, the original engine, carburetors, suspension, rear axle, gearbox, brake drum housings, and engine number plate. Even the original color, which was found on several areas of the body has been carefully matched. As many restorations will include remade parts or reproduction pieces, it is even more remarkable that these components, to name just a few, as well as the original Superleggera alloy body represent this beautiful car both as originally built and in the superb restoration.

The lustrous, deep green paint is beautifully finished, applied with consistent coverage and excellent final polish to all areas. This rich color reveals the signature Touring streamlined fillets, carefully articulated panel lines, delicate rocker scallop, and tailored upper coupe roofline, a distinctly Touring signature. The minimal, yet refined brightwork surrounding the Marchal headlamps is perfectly formed and polished, while the glass accessory lights, and teardrop door handles are beautifully fit to the body. The notably refined ivory white rubber trim is perfectly fit to the front and rear of the car. The brilliantly polished wire wheels are shod with period correct Michellin tires and accented with chrome plated dual-ear knockoffs embossed with the Alfa Romeo script. The wire wheels create a handsome contrast against the large diameter drum brake castings, befitting the competition lineage of these great cars and the Super Sport designation. The Touring Superleggera coachwork badges, Alfa Romeo emblems, and distinctive grille are gorgeous pieces of automotive jewelry, particularly brilliant against the deep emerald body color. Every aspect of the original design has been wonderfully captured in the restoration with beautiful finishes and exemplary details delightfully evident from every view.

Gently pulling the recessed door handle lever, the green leather interior is revealed in the sculpted door panels, full width seating, and breathtaking dashboard. The seating and door panels are presented with ivory piping which echoes the same color theme in the carpet perimeter binding. The supple leather and pleated inserts are beautifully stitched and trimmed with precision. The hinged bench seat creates a comforting but supportive feel, while the body-colored dash and full instrumentation convey the sporting spirit of this model. The dashboard and accompanying instruments are beautifully restored and wonderfully laid out. The central waterfall grill separates the two main instruments, both of which display unmistakable Italian flare in design, beautiful nomenclature, and stunning colors, surrounded by crisp polished trim and deep orange color accents dappling the various knobs and handles on the dashboard and doors. The interior is beautifully composed with the finishing touch being the original aluminum and wood steering wheel, quietly reflecting the history of this car as an original work of art. Further details throughout the interior include beautifully sculpted door handles and window cranks, elegant, felted headliner, and a rarely seen Clayton Air Conditioning and Demisting Unit mounted under the dash. Overall, the interior exhibits the familiarly stunning excellence and attention to craftsmanship consistent with the exterior body design.

The matching numbers engine and beautifully finished engine compartment have also been comprehensively restored using correct factory finishes, correct hardware and fasteners, and proper wiring, all of which are brought together with mechanical refinement and aesthetic harmony befitting a car of this caliber. The engine castings are uniformly finished with attention to detail and authenticity in every respect, including the original carburetors, the original data plates on the firewall, the original Touring body Number 3301, and correct engine turned aluminum trim dressing the top of the cowl. Every aspect of the car from the three louvered air cleaner housings, engine wiring, textured finishes and correct hardware further support the mechanical excellence in keeping with the restoration. The trunk is finished with a correct Borrani spare wheel and Michelin tire resting upon matching green carpet with ivory piping, The underside of the car has been restored with the same attention to detail and authenticity afforded to the exterior, displaying accurate details, proper fasteners, and correct exhaust down to the hand shaped square edge exhaust tip. Throughout the entire car, evidence of passionate Italian artistry has been applied to deliver a beautiful and accurate restoration of an exceptional car. The car is accompanied by records of ownership, notations from the history of the car, and photos documenting the eight-year restoration.

This Alfa Romeo 6C 2500 Super Sport represents a rare opportunity to acquire a beautifully restored Touring coachbuilt Alfa Romeo with a world-class restoration and documented history. The elegant body lines, sporting 6C engine, and stunning interior makes this Super Sport a welcomed entrant to any major automotive venue throughout the world. For those who cherish the passionate Italian artistry found in hand-built alloy coachwork, top level restoration, and state of the art engineering, this Alfa Romeo 6C 2500 Super Sport will deliver the thrill of exceptional motoring captured in a stunning once in a lifetime statement of performance artistry and design elegance. 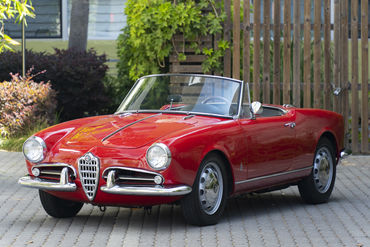