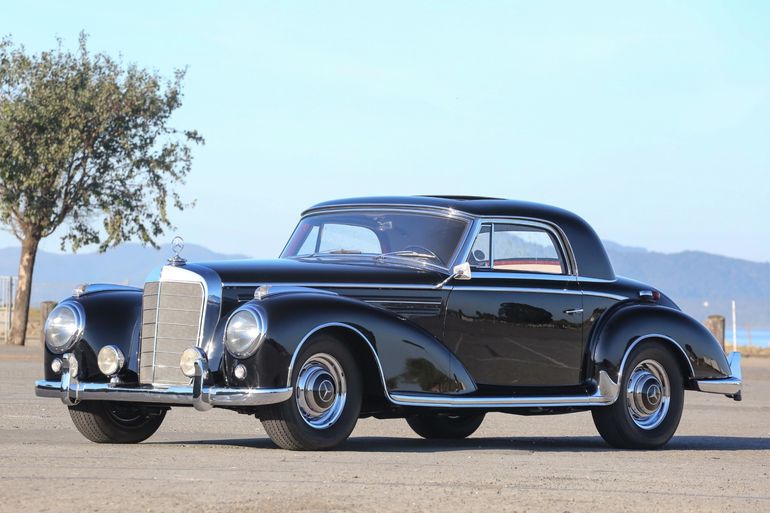 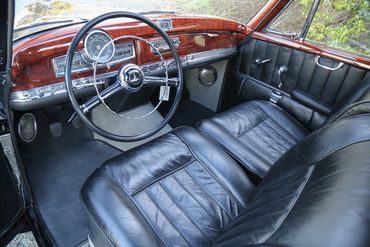 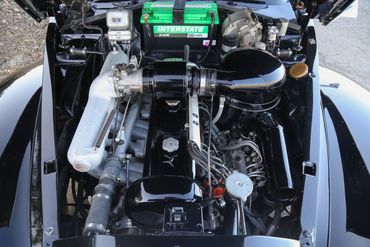 Among the most expensive and exclusive luxury cars ever crafted, the Mercedes-Benz W188, 300SC continues to represent superlative design coupled with distinctive engineering, despite having been manufactured more than half a century ago. An elegant hand-crafted flagship offering, the 300SC (1955-1958) was the successor to the 300 (1951-1954), both of which represented the ultimate Mercedes-Benz available at the time. Although the design was considered classic and more traditional, underneath the upright, stately grille and traditional fender line lurked a mechanical powerhouse of performance including the engine, suspension, and chassis derived from the formidable 300SL Gullwing. In addition to the importance of the 300 to the automotive world, it was critical to the Daimler-Benz brand strategy emerging from the throws of war, allowed to once again build cars. Key to their new marketing approach, Mercedes-Benz would offer affordable fleet and commercial vehicles, reinstate their racing program, and craft specialized premier luxury cars for their wealthy and influential clientele. But in fact, the 300SC offered the perfect blend of all three; the prestige of the limousine, the racing and performance lineage of the Gullwing, and the durability/reliability developed for their commercial vehicles.

First unveiled at the Paris Salon in 1951, production was very exclusive and thus limited due to the extensive hand labor required to build each of these impressive luxury cars. In 1955 the SC appeared with upgrades that included a new version of the Bosch mechanical direct fuel-injection inline six-cylinder engine which delivered 173hp at 5400 rpm. Independent front suspension, four-speed manual transmission, tube shocks and coil springs, and four-wheel hydraulic drum brakes were among the many state of the art technical features built into each car. The SC featured new “low pivot” independent rear suspension and revised hood trim, slightly updating the exterior design. Assembled by a cadre of top technicians at the Mercedes-Benz Sindelfingen Karosserie under the direction of Design Chief Hermann Ahrens, the coachwork and finish were legendary, from the hand stitched leather seats to the precise fit of the doors, beautifully polished paint and chrome, and the custom-tailored luggage accompanying each car. Every vehicle was obsessively prepared to exhaustingly high coachwork standards with exemplary handwork. Three body styles were available, Coupe, Cabriolet, and Roadster.

In addition to the prestige, presence, and performance offered in the 300SC, the cost (double that of a 300SL Gullwing and more than a Rolls Royce) made each of these specially built cars exclusive to royalty, Hollywood elite, and industry tycoons such as Aga Khan, Bing Crosby, and Clark Gable to name a few. Contemporary press raved about the plush and luxurious interior, build quality, and remarkable performance, And while each of these ambassadors of elegance performed a critical role reestablishing Mercedes-Benz as a world automotive brand, production was limited and fading as technology moved forward, features and performance needs shifted, and wealthy customers sought different cars to meet their varying needs. Of the 98 300SC coupes built, it is believed that fewer than a dozen were cars assembled with the rare factory optional sunroof.

According to Mercedes-Benz production records and a copy of the build sheet accompanying the car, chassis no. 6500070 was originally finished in graphite grey and trimmed in a special upholstery combination of grey leather seats with matching grey corduroy door panels and a grey headliner. The factory record also confirms the rare and desirable Venti steel sunroof, which smoothly retracts into the steel roofline when opened. The car was also fitted with a Becker Mexico radio, windscreen washer, and a rearview mirror. After completion, the car was dispatched in late April 1956 to the buyer, Friedrich Liese G.m.b.H., a metalworking company based in Hamm, Germany.

Having served the first owner, the car was subsequently exported to the United States, whereupon ownership was assumed in the Pacific Northwest. By 1977 the rare sunroof coupe came under the ownership of Siegfried Linke, a marque expert based in Seattle, Washington. Mr. Linke, a classically trained apprentice and employee at the Daimler-Benz factory in Stuttgart during the early 1960s, immigrated to the United States in 1963 with an offer to work with Phil Smart Mercedes-Benz in Seattle. After two years at the dealership, Mr. Linke founded his own service house, European Motors, which he successfully operated into the 1990s.

In late 1977, Mr. Linke sold the 300 SC to a Seattle-based enthusiast who dedicated more than 40 years of ownership carefully garaging and servicing the car as needed. Used modestly over the years, the owner conducted restoration work over two periods, one in 1998, and more comprehensively in 2006. Mr. Linke was retained to perform a sympathetic refurbishment that included a refinish of the exterior in black and re-upholstery of the interior with black leather seats, light grey accent paneling and carpets, grey headliner, and refinishing applied to the elegant interior wood. In 2006, with 25,332 miles recorded, a hand-written invoice for services indicate the car was very carefully assessed and restored with attention to major components including a new wire harness, engine rebuild, fuel-injection rebuild, removal and service for the fuel tank, new shock absorbers, and other detailed items. Also, at this time, the sunroof was adjusted for smooth operation, brakes were serviced, rubber seals replaced, various chrome plating redone as needed, and a new stainless steel exhaust installed. The invoice concludes with a total over $56,000.00 for parts and labor. More recently, the brake and fuel systems were fully serviced by the Mercedes-Benz Classic Center in Irvine, California, whereby it was sold to its next owner shortly thereafter.

Today this wonderfully finished 300SC is an excellent example of what makes these iconic touring cars such captivating instruments of elegance. At every turn, the hand-built ambiance of these cars exudes the luxury and refinement that established Mercedes-Benz in the pantheon of excellence. This example is very likely one of very few built with a factory sunroof; a delightful feature that delivers a refreshing open air feel inside the car when all side glass is down, motoring at speed. The paint has good depth, glossy finish, and is properly detailed and polished over the expansive surfaces. There are some mild areas where the paint has succumbed to the passage of time, including minor evidence of road use and some light sanding marks evident on close examination. Panel fit is quite exemplary on the hood, trunk, and sturdy doors. The excellent fitting body to fender bead lines, body trim, and door chrome trim are quite nice. The chrome throughout is in very good condition, with deep luster and clean, bright reflections, though some areas show light hazing and minor flaws on the bumpers and a few areas, visible only upon close examination. The upright grill is in excellent condition, with one minor blemish on the driver’s side where the hood had previously slightly dimpled the inside corner of the back edge. An impressive touch on the rear bumper is the German pronouncement of the engine lurking under the hood “Einspritzmotor”, subtly reminding those lurking behind of the powerful fuel-injected engines that commanded both Nurburgring and the Autobahn. All lenses, lighting, and glass are in excellent condition including the windshield. The steel wheels are covered with beautifully polished stainless wheel covers, with domed hubcaps painted to match the elegant black exterior.

The interior is a handsome example of Mercedes-Benz quality showing refined leather finishes with just a hint of relaxed use, inviting comfort and ease when driving. The combined black leather and soft gray materials create a subdued presence inside, softening the typically stark and somber all black interior often found in cars of this scale. The factory Becker Mexico radio remains installed in the dash, nestled beneath the stately clock, flanked by instrumentation and expansive burled wood finishes. The dashboard is exceptionally nice with very clean gauges, high gloss lacquered wood, and a commanding steering wheel. The trunk is outfitted with original matching custom leather luggage, still retaining the factory finishes and hardware, now showing a delightful patina emblematic of stately travels.

The engine compartment is in very good condition overall and properly presented with correct parts, correct intake system, fuel-injection, proper factory components, with attention to hard lines, hoses, and electrical allowing for some modern updates. The fuel injection plenum is clean and nicely detailed along with properly painted components, though some showing signs of use since the restoration was completed. Though not detailed for show, the matching numbers engine and generally correct engine compartment are quite tidy and properly finished; a difficult if not nearly impossible challenge given the rarity and precision quality of these mechanical parts, many of which are shared with the iconic 300SL Gullwing.

The car starts easily and idles smoothly, though regular use has been limited in recent years. Having been thoughtfully enjoyed and serviced throughout ownership, only minimal miles have accumulated at various points during the past decade. Once warmed up and underway, the driving experience is both stately and composed, offering tremendous prestige when casually motoring, while making even a modest run for groceries an event of kings. The ride engineering, braking, and responsive suspension contribute to a luxury driving experience of opulence and grace. With plenty of luggage space for touring and an open sunroof design, one is easily lured off the main highway into sunsets and winery vistas, capturing days of luxury motoring when arrivals were predicated on delight and delays merely inspired engaging dinner conversation.

Inspection of the underside reveals a car that has been serviced and cared for properly, with many of the suspension and components painted, perhaps with a bit more enthusiasm than factory guidelines. Having traveled only moderate miles since installation, the stainless steel exhaust retains a fresh finish. The floor pan, trunk floor, and undercarriage are both solid and straight, showing no evidence of structural compromise, merely typical road use. The car is offered with previous service and ownership documentation, (one record dating back to 1977), a copy of the factory build sheet, factory fitted original luggage, and an original 300SC instruction manual.

This is a wonderful opportunity to acquire an enjoyable Mercedes-Benz 300SC with both a sporting nature and stately manner. Powered by the same engine in the iconic 300SL Gullwing, the mechanical majesty is only surpassed by the timeless hand-crafted opulence. One of likely fewer than a dozen factory optioned sunroof cars, this 300SC is ready for pleasant drives, touring, or showing in any Mercedes-Benz event, while transforming even the most average journey into a memorable and captivating motoring experience. 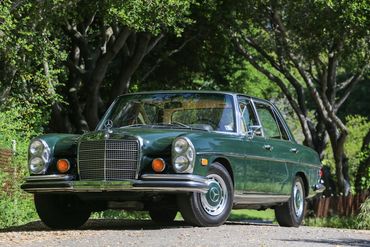 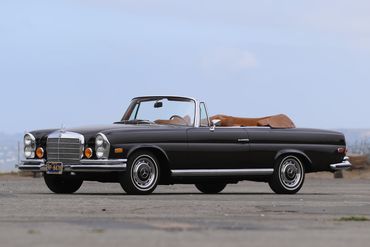