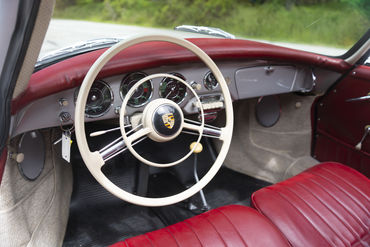 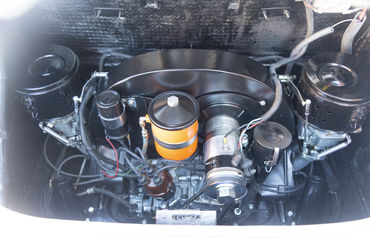 Factory Sunroof 356A in classic, desirable, and original colors. More than 60 years of single-family ownership

With its iconic shape and race-bred performance, the lightweight and agile 356 Porsche has been continuously sought after by enthusiasts and collectors for their timeless beauty, elegant engineering, and versatile performance. The “A” version of the 356 came to market during Porsche’s rapid growth as a production car company and a formidable motorsports competitor. The ongoing development of the 356 included the 1600 series engine, named for the 1,582cc engine, which was perfectly matched for the rapidly growing US market. The 356A remains today one of the most desirable vintage Porsches, exemplifying all the traits of the original design with vastly improved craftsmanship, performance, and build engineering – features which continue to be hallmarks of contemporary Porsche offerings.

According to a copy of the Porsche Kardex accompanying this 356A, chassis number 108720 departed the Porsche factory August 6, 1959, outfitted with a factory sunroof, finished in silver metallic with red leatherette interior and oatmeal corduroy cloth seat inserts. Delivered to the Lubeck, Germany Porsche dealership “Travag Porsche”, it was given its initial service (Service I) upon reception at Travag on August 7, 1959. This dealership is still in business, operating today as Porsche Centrum Lubeck. The car was then sold on October 18, 1959, and on October 23, 1959, Service II was performed with 2,648 kms which are assumed to have been accumulated by dealership employees, possibly even Mr. Travag himself. In preparation for delivery to the first owner, Mr. Heinz Kohler of Lubeck, Germany took possession of the car, warranted for six months/1o,000kms. The car was then serviced under warranty April 11, 1960, at 9,823 kms, invoiced to Herr Kohler.

Sometime in 1961, the car was sold to the second owner, Mr. Russ Collins, Green Bay, WI. Collins, an American engineer at Inland Steel and later Durant Engineering. Collins is thought to have purchased the car while on a business trip in Germany. Remarkably, over the next 60 years, the same family would retain ownership of this Porsche moving to various locations, always retaining the car, with ownership transferring from father to son. Not to be left out, even the mother of the family contributed to the history. While driving the car in 1965, she neglected to notice the engine had experienced catastrophic oil loss, overheating the original engine. The family replaced the engine, continuing to use the car throughout the 1960s and 1970s when new engineering employment motivated the family to move to San Diego, CA. By 1990 the son purchased the car from the father, continuing to care for it and eventually restoring it.

Under Collins’ ownership, the engine currently in the car was rebuilt by noted engine builder Jacque Lefriant in the late 1980s. In 2001, after the younger Collins moved to Northern California, racing legend Wyn Robertson of Continental Auto, in Sacramento rebuilt the engine along with several other mechanical aspects of the car including reconditioning all case surfaces, joints, studs etc, balancing the crank, flywheel, and pressure plate, new pistons and main bearings, and machining cam follower surfaces. In 2012, the speedometer indicated 82,000 when it was replaced with a new unit indicating 37,859 miles. The owner carefully documented this change and accumulated miles with each subsequent service.

In 2013 (38,683 miles indicated), the front and rear engine seals were replaced, a new lightened flywheel, clutch disc, throw-out bearing and clutch cover were installed, and the valves adjusted. Fluids were changed at this time along with a new right rear wheel bearing. In 2015 (41,772 miles indicated), the floor pan, front diagonal, longitudinals, sway bar mounts, and bushings were replaced. During this time, the interior was refurbished, and other areas addressed. This also included replacing the right-side heater tube, a new clutch cable, new rear rubber brake lines, new rear brake line through the tunnel, a new tachometer cable, and Fatmat insulation installed along with new carpet. The washer pump was rebuilt, and the oil and filter changed as well. In 2018 (42,000 miles indicated), the flywheel was replaced along with a new clutch cover, throw-out bearing, and new clutch disc. Later that same year the car was upgraded to a 12 volt electrical system with a new 12V high torque starter motor and an oil and filter change performed at 43,686 miles.

According to the current owner, the engine was recently removed and refurbished by Porsche mechanic Ray Schubert including a top end rebuild with new rings and a valve job on the Super 90 heads. The engine tin was powder coated, all engine hardware was replated, and an Ab Tiedermann rebuilt distributor (correct Bosch BR18) and fuel pump were installed. Both the distributor and fuel pump were tested after the rebuild before installation. A pair of newly rebuilt 356 Carb Rescue 32mm Zenith carburetors were installed on the recently serviced Schubert engine.

Today this handsome Porsche 356A presents a very good drive with much restorative work performed over previous years. The silver paint has been applied consistently with good coverage and gloss, with only minor evidence of road use visible at the lower portion of the front apron. The body panels are properly finished with gaps and panel fit consistent with very good driver standards. Both the hood and engine lid are original to the car, retaining their correct matching factory numbers (720) indicating they are the original panels assembled with the car. Even the distinctive 356 “smile line” on the hood is beautifully delineated across the uninterrupted fascia of the car. The chrome is in excellent condition, including the domed hubcaps, light trim, window trim, and door handles. The side glass bears etch marks showing Sigla and Sekurit while the windshield, purchased from Stoddard in 2002, is a Pilkington stamped unit. The correct slotted steel wheels are date marked 3 60 and 8 60, while the spare tire is stamped 4 1/2J15 and dated 7 59. A set of matching 165/80R15 contemporary radial tires are mounted. Overall, the exterior of this 356A sunroof coupe has a very satisfying visual presence and excellent stance enhanced by years of long-term ownership and professional care by Porsche experts.

The interior is a handsomely finished combination of original details and thoughtfully refurbished upholstery. This combination comes together in a cohesive and attractive way, supportive of long-term ownership without discarding much of the carefully enjoyed history while still preserving the character of the car. Showing just the right amount of patina for a well-sorted car, the more recently re-upholstered leatherette seats, dash pad, door panels, and woven carpet combine very well with the original ivory trim throughout the cabin. The beige square weave carpet and black rubber mats create a nice contrast to the red finishes. The dashboard features clear and crisp instruments displaying their iconic green indication, a nicely hued ivory steering wheel and painted horn ring, beautifully warmed gear shift knob, a Blaupunkt radio with speakers mounted in the front kick panels underneath the dashboard, and a VDO clock mounted above the radio. Above the passengers, the factory sunroof can be manually opened or closed by a rotating handle. The front storage area is in generally good condition with proper features, a single strike chassis stamp, and a finished fuel tank. A correct leather strap properly retains a matching painted steel wheel, stamped with 7 59, consistent with the original build date. A correct jack is properly stowed and a 12V Optima battery is in place under the spare tire.

The engine compartment is clean and properly prepared with correct finishes and attention to detail. A recently rebuilt Bosch distributor is in place and twin professionally tuned Zenith carburetors are topped by a pair of metal air cleaners. As noted during the period where the engine was removed, all engine tin was powder coated to aid in longevity while still offering the original appearance. The underside of the car is in very good condition with recently installed floors, longitudinals, front diagonal, and sway bar mounts professionally welded in place.

The car runs and drives quite well, starting easily with good throttle response, indicative of proper tuning. The gearbox has smooth operation and good syncromesh with just the right “feel” to the shift linkage and a tall clutch pedal. The brakes are typical of the drum type of this era, offering good pedal pressure and stopping power for a car of this size. Road manners are smooth with a hint of buoyancy over bumps, an endearing feature one appreciates more and more as miles accumulate while driving a 356. Overall, the car is a pleasure to drive, particularly continuing the legacy of more than half a century of proud family ownership.

Featuring a wonderful combination of long-term family ownership, thoughtful care and selective restoration, combined with original history, this handsomely prepared Porsche 356A with factory sunroof is a rewarding car that can be readily enjoyed without hesitation just as it has for so many years. Beautiful colors, iconic body design, and Porsche engineering all come together in a quality road car, ready for another half century of motoring pleasure.

The car is accompanied by numerous additional items including a nearly complete original 1959 356 toolkit with correct Hazet tools, tire pressure gauge, and original roll. A correct jack and Lietz luggage rack with mounting hardware and leather straps are also included. As the long-term owner was an active Porsche enthusiast, several Porsche reference books and numerous copies of original 356 Porsche Registry magazines dating back to the late 70’s are also included. The surviving original owner’s manual, though well used, is included, along with a reproduction owner’s manual, a reproduction manual pouch, and radio documentation. A copy of the 356A Factory Service Manual and Porsche Family Tree brochure are also included. 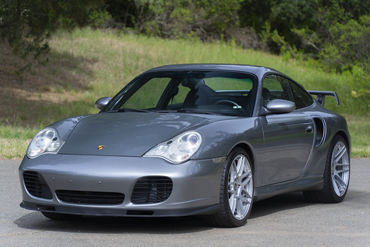