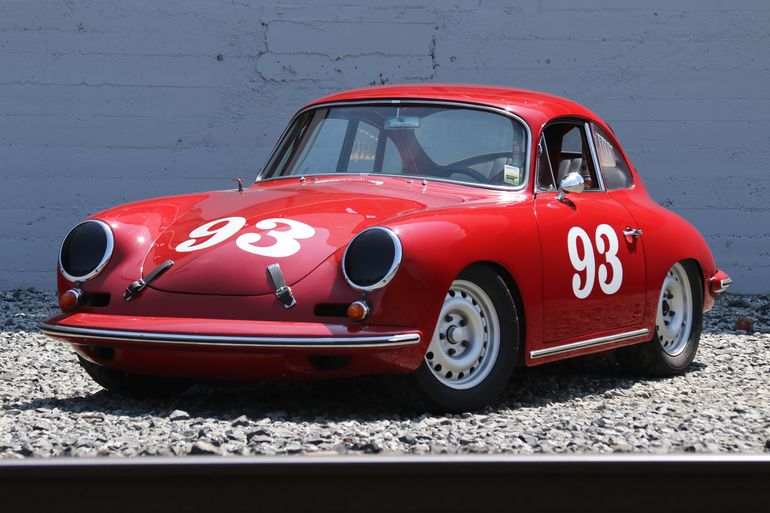 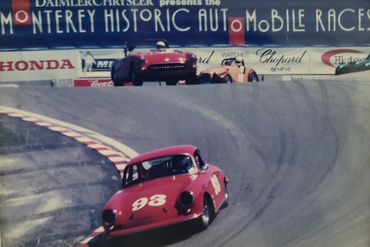 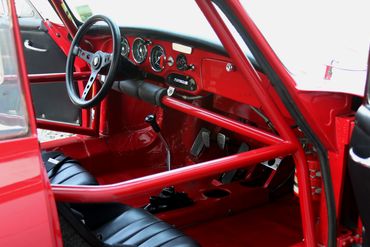 Bring a Trailer Auction Preview: Tastefully race-modified 356B with California title. Decades of historic racing history with CSRG. Fitted with disc brakes and accompanied by a significate spares package.

With its unique profile, sporting nature, and race-inspired lineage, the legendary Porsche 356 was both a stylish road car and a competitive race car. In recent years vintage racers have discovered the joys of racing these nimble, cost-effective cars in vintage events. Though developed with a modest chassis and durable engine the 356 SC ultimately evolved with gradual improvements before handing the performance baton to the venerable 911. Race-prepped variants of the 356, Outlaw versions, and modified street cars offer a wide range of variety, engaging enthusiasts from all parts of the collector car world to experience these cars in a competition setting.

According to a copy of the Porsche Certificate of Authenticity, this 1963 Porsche 356B 1600 Super Coupe was originally built with engine number 700898 616/2 and transmission number 65449 741/2A. The car was finished in color code 6211 Signal Red with Black Leather interior. Factory options included Ventilated Chrome Wheels, Two Headrests, Outside Mirror, Radio Blaupunkt “Frankfurt”, Two Loudspeakers, and Antenna. According to verbal accounts from the long-term California owner, the car spent much of its early years in California until it entered a recycling yard joined by several well-used 356 Porsches located in Northern California. In 1990 the car was noticed by a well-known NorCal Porsche expert and restoration specialist who thought it would make an ideal donor car for vintage racing.

The current owner/builder purchased the car after seeing it in an Alameda body shop in 1991. Surprisingly the car retained the blue and gold California license plates and title, which he transferred to his name in January 1992 where it has remained on certificate of non-op. The 356 was brought into his shop where the body shell was bead blasted to bare metal revealing areas that required body repair. A new roof, replacement of a front section, and a new section of the rear were welded in place. The floor was removed and a 2” square perimeter frame specially fabricated and welded in as additional support structure for a fully integrated race cage, which was cut and welded by Jim Groom to meet CSRG rules from the era. In addition to providing a rigid base for the roll cage, the perimeter frame offered additional chassis rigidity suitable for the rigors of racing. The inner rockers were redone, and the floor welded back into place. A replacement engine was built for racing and installed along with a gearbox that utilized special gearing for race use. The gearbox was built with a second gear installed in first gear position, which is a more suitable gear for track use. Second gear is a high ratio, third is a low ratio, and fourth is a high ratio. With the engine running 4500-7000 rpm, and ZF limited slip differential this set of gearing made it ideal for a range of track uses. The car was painted bright red and went on to compete in the first of many races resulting in an illustrious career attending numerous CSRG racing events.

According to the four racing logbooks, the first race this Porsche 356 completed was in March 1993. Dozens of CSRG races continued throughout multiple seasons spanning more than 25 years of competition events with the owner and occasional guest drivers at the wheel. The only break in annual participation would be the 2020 season, interrupted due to public venue limitations imposed by COVID 19 restrictions. The last recorded race was logged May 3, 2019, at Thunderhill. Purpose built and raced with confidence; the car was later updated with stock disc brakes from a 356C with racing pads, and Vic Skirmants front spindles.

In April 2018 the engine was removed and a freshly built engine was installed. During the racing period, two engines had been used to keep the car in strong running condition. Research derived from various experiments in each of the engines that were run informed the ideal traits for the new engine. The owner chose a proven engine package from Shasta Designs using 83.5 Shasta FSR race pistons and cylinder set, Carrillo rods, a Scat crank, a NeuTek SX-3 cam, and MSD ignition, all built with a 912 case. New bearings were installed and a low-profile deep sump billet oil pan with 1.5” more ground clearance was installed. The engine has since accumulated approximately four hours since it was installed.

Today this 356 remains one of the most recognized vintage race cars in on the West Coast. Seen here at Thunderhill and here. Built for the fun of racing, this prominent participant has been campaigned for 25 continuous years by a well-respected Northern California Porsche enthusiast. Though built to race, it can potentially be repurposed as a backdated Outlaw or modified for street duty. The paint is in very nice condition overall, better than typical race car cosmetics. There are a few road chips, and minor imperfections, but none that detract from an otherwise very consistent exterior appearance. The panel fit is quite good for all opening features, and the car retains several stock design elements including the twin grille, chrome door handles, taillights, glass windshield, and stock bumpers. The quality of the chrome, trim, and emblems is very good overall with a few pieces showing honest patina. The rear quarter windows have been replaced with lightweight louvered clear plexiglass panels, and the side and rear wondows have been replaced with weight-saving plexiglass. The headlights are replaced by black plexiglass panels, and the hood features leather straps, all of which create distinct racing touches. The 5.5” x 15 ET30 sixteen-hole ventilated aluminum wheels with race profile Yokohama tires deliver a hunkered down race stance that further adds to the purposeful look of this vintage race car. A handsome and authentic exterior touch, a genuine Talbot door mirror adds to the 25-year competition legacy of this purposefully executed vintage race car.

The interior is all business having been spartanly outfitted with the painted roll cage, painted floor, exposed gear shifter and pedal assembly, form fitting low-profile racing seats, Lifeline fire system, and five-point Sparco harnesses dated to 2023 with Simpson lap belt for the passenger side. The dashboard retains the original instrument configuration topped with padded black material and fitted with stock Porsche gauges. The speedometer, zeroed out in 1992 when the build was completed, now reads 14,000 miles, all of which were accumulated during the first 15 years of racing and practice sessions. When new Vic Skirmants front spindles were installed, the new units had no provision for the speedometer cable, so it was no longer used. The painted roll cage displays many of the racing events this car has completed during racing seasons over the past 25 years.

Under the hood, the engine is a factory type Porsche unit which, based on the engine number, correlates to a late production 912. Outfitted with twin Solex carburetors, the engine compartment and recently built engine delivers a very clean and tidy presentation with largely original features consistent with the period. The front storage compartment is clean with easy access to the FuelSafe fuel cell, lined with foam which appears in good visual condition when viewed through the filler neck. The electrical system has been converted to 12 volt. The underside is tidy, generally sound, and dry, showing clean engine and transmission castings, a sound exhaust system, four-wheel disc brakes, Shasta low profile oil sump unit, and other modifications for racing use.

Several spare parts are included with the car: 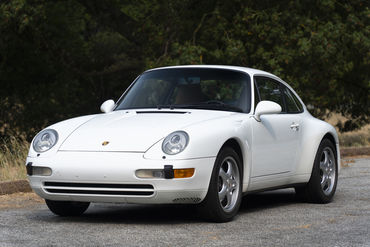