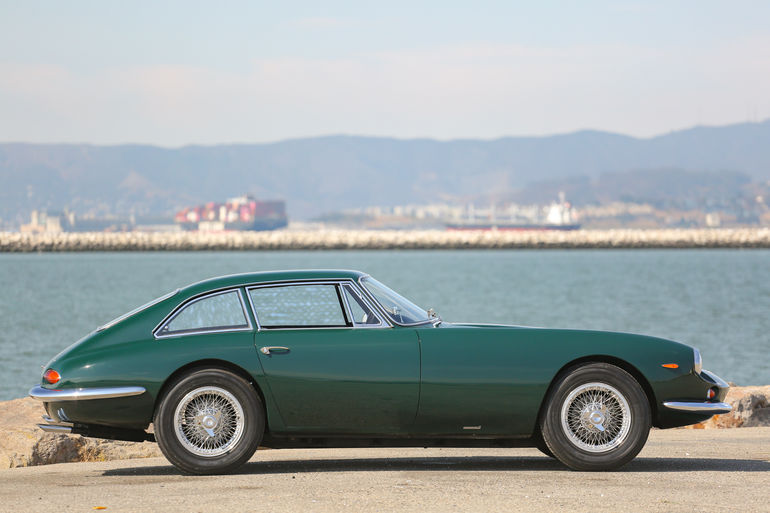 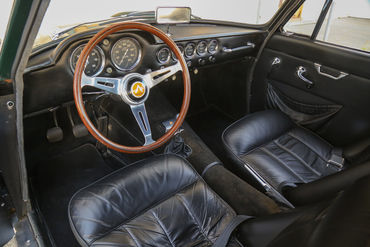 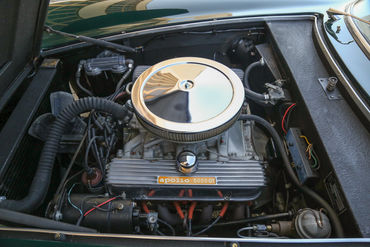 Previously Owned by Milt Brown and with just over 4,000 original miles. An interesting and very original Euro-American artifact of automotive history!

Conceived and developed by engineer and entrepreneur Milt Brown and his partner Newt Davis, together these bold automobile enthusiasts envisioned an American sports car with proven mechanicals and Italian inspired design. The Apollo GT took shape as Frank Reisner, founder of “Intermeccanica”, was enlisted to be the coachbuilder, crafting the design originally penned by Ron Plescia. The prototype, a handmade aluminum shell, was formed over a Milt Brown designed steel chassis with the first series concepts revised when Reisner called upon former Bertone designer Franco Scaglione to refine the design, adding side quarter glass, and refining the body lines. The first production Apollos, the 1963 3500GT were hand-formed in steel and shipped to Oakland, California where the American V8 drivetrains and four-speed manual gearboxes were installed and prepared for display at Brown’s dealership, International Motorcars of Oakland.

With a claimed top speed of 130 mph and a starting price of $6,000, the Apollo 3500GT was well-received by the automotive press. The lightweight Buick aluminum V8 engine suited Brown’s original design and offered GM reliability with top performance capabilities. Apollo 3500GTs sold well given the relatively small amount of press and marketing afforded by the fledgling company. Although the company eventually released a convertible and upgraded the engine selection to the five-liter 5000GT, by mid 1965 the company faced too many financial challenges and had to shut down production. International Motorcars sold 76 Apollo GT coupes, very few of which were the desirable 5000GT models, built later in the production run.

The Apollo was highly influenced by contemporary Italian designs of the 1960s with curvaceous front fenders, long hood, and engine placement nested deep into the cowl. Brown insisted on this mid-engine layout, with most of the weight sitting toward the middle of the car, similar in layout to the Cobra, with the driver’s seat being very closely positioned to the rear axle. The fastback roof and sweeping glass delivered a unique visual signature that conveyed a dynamic and elegant profile – a uniquely American car with stunning execution, being among the last to be constructed within the master traditions of great Italian coachbuilding.

This particularly handsome Apollo, chassis #1074, is among the very few original examples extant today. Showing just 4,000 documented original miles, finished in the correct factory color, and displaying nearly all the original interior, original drivetrain, and Borrani wire wheels, the car was also formerly owned by Apollo founder Milt Brown. In addition to being a factory original low-mile car, it is also believed to be the only Apollo painted this color, and the second to last Apollo constructed before the company concluded production.

After delivery to the first owner, the car remained largely unused, stored indoors, preserved by the dry Southern California climate, for 35 years. Though in need of mechanical refreshing, the condition and originality were worthy of recommissioning and thoughtful detailing to a high level. In 2009, the car was repainted the correct factory color, retaining the original door jamb paint and other areas still finished in the factory original green color. By 2004, Milt Brown purchased #1074, finding it to be in superb condition, enough to confidently generate a letter to the next owner in 2004 confirming the originality of the car, the finishes, interior, and various features. In 2006, the car was consigned to Fantasy Junction, with just 1,300 miles indicated on the odometer, as documented by Milt Brown under his ownership. Today, showing 4,008 original miles currently indicated on the odometer the car is very much in keeping with the condition described by Milt Brown in his letter verifying the authenticity of this example.

Today, this highly desirable 5000GT presents a visually captivating factory original appearance of high quality and excellent detailing. Still retaining glossy paint, the finish overall shows some signs of age in the panel line edges and a few minor chips typical to modest road use, but these aspects only add credence to the very presentable 40-year-old finish. The paint is still surprisingly deep and lustrous with consistent coverage to the hand formed steel body. The body panels are exceptionally straight with good panel fit and smooth opening and closing for the doors, hood, and trunk. The chrome is showing some signs of age with minor evidence of age on the door handles and light hazing on the bumpers, but otherwise quite nice overall. The exterior trim, lenses, and original glass are all excellent including a nicely formed grille and yellow enameled Apollo emblem mounted at the front of the car. Other original touches include Carello “Made in Italy” wiper arms and Carrozzeria IM side script, boasting the Italian connection. The sporting nature of the car is accented by beautifully finished Borrani wire wheels and triple ear knockoffs shod with a handsome set of period correct Michelin tires. The polished aluminum rims are in excellent condition as are the chrome plated knock offs, with some age showing on the hubs and spokes, though, once again, surprisingly well preserved for original finish wheels.

The interior is excellent overall, recalling the excellence delivered in these cars when offered new. The black leather seating surfaces appear to have been recovered at some point, though the seating material remains supple and very closely matched, evenly finished, and very clean with distinct character creases. The driver’s seat has settled from modest seat time, but the finishes and materials are consistent with the rest of the interior. Remarkably well preserved, the original carpeting is in good condition with wear marks showing in familiar areas and fading to some sections. The door panels and headliner are in excellent condition. The chrome finished door hardware, latches, and other delightful details such as the ashtray with the Apollo emblem, door map pockets, and rear luggage straps remain original and in very good condition. The dashboard is in excellent condition throughout with beautifully finished instruments, switches, and correct details. Overall, the entire dashboard presents a cohesive original finish which is remarkable in both condition and originality.

The engine compartment is clean and attractive, reflecting preservation grade finishes that would be welcomed in any top level concours, offering exemplary restoration reference for other Apollo examples to follow. The finishes display honest patina, with a few areas being in surprisingly fine condition considering the age. The overall results under the hood feature correctly polished aluminum engine components, proper fasteners and hardware, proper lines, correct and distinct Apollo branded valve covers, and a correct air cleaner assembly. The engine is believed to be the original factory unit installed when delivered. The four-speed gearbox is also believed to be the original unit. The underside is in excellent condition exhibiting finishes consistent with factory construction, coatings, and minimal evidence of exposure to outdoor elements.

The car starts easily and runs smoothly at idle. Though miles driven have been kept to a minimum to preserve the original accumulated miles, the car has excellent road manners, feels very tight and positive with good power and smooth clutch operation, while the front disc and rear drum brake combination deliver performance consistent with braking from this period.

This is an exceptional opportunity to acquire a wonderful example of a stunning preservation grade Apollo delivered in unique colors. Second to the last of the 76 cars built, this authentic Apollo, verified by and formerly owned by the founder Milt Brown, offers wonderfully settled cosmetic and beautiful mechanical details preserved by careful custodians of this unique American brand sports car. This Apollo 5000GT is ready to offer the next fortunate owner a chance to exhibit a one-of-a-kind example, driving, showing, and further educating appreciative enthusiasts about one of America’s most daring and dynamic sports cars of the 20th century; the Apollo 5000GT.