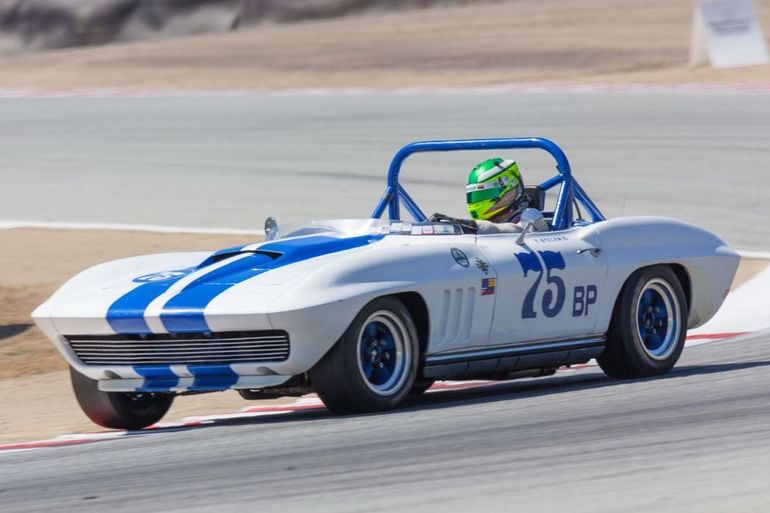 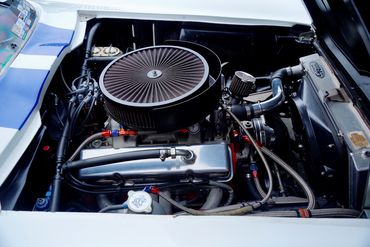 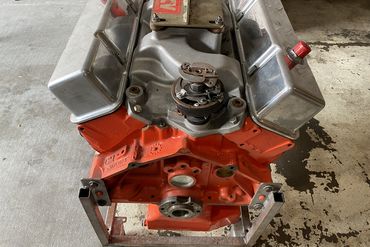 With decades of ground-breaking performance history on both the open road and at competition venues all over the world, the Chevrolet Corvette has today become one of the most sought-after cars for vintage racing events. Known for their durability, great looks, and reasonable track costs, the Sting Ray continues to be regarded as one of the most important sports cars of the 20th century. Though the first Corvette arrived in 1953m by the early 1960s, it had become a well-honed performance machine capable of besting European competitors in a variety of racing events. With Zora Duntov adding his unique racing touches and the newly penned Pete Brock/Larry Shinoda 1963 Stingray, the Corvette stepped up with independent rear suspension, disc brakes, and fuel-injection, capturing street race victories and checkered flags at racetracks around the world. Well balanced, beautifully styled, and powerfully equipped, mid-sixties Corvette race cars continue to capture the imagination of Corvette enthusiasts offering fantastic vintage racing opportunities for skilled drivers who enjoy leading the pack with confidence.

This Corvette was delivered from Chevrolet in the following configuration, decoded from the VIN.

Trim Tag located on the cowl:

Although ownership history from 1965-1969 is not known with certainty at this time, the car is known to have been converted to race duty in 1965 when it reportedly ran races in the San Diego, CA area in Cal Club events. According to the SCCA Vehicle Logbook accompanying the car, race events are documented from the first race at Willow Springs, February 27 and 28, 1988, but also records James Smith as the owner from 1969-1979 and Melvin Gallways as the next owner from 1979-1987. Both owners ran various events at Southern California tracks including Willow Springs, Riverside, and Laguna Seca. A photo in the logbook shows the car painted red with white and blue central body stripes and the number 31, at that time, under Gallways’ ownership. Ownership proceeds in 1988 to Michael Kinney, followed by Chris Corraley in 1991, Dan Martin that same year, and Terry Gough in October 2000. Gough, already a seasoned racer, would restore the car in 2000 and race it from 2001-2012. A well-known driver in vintage racing events, Gough would consistently outperform vastly more expensive competition achieving several trips to the podium with this car, often winning his class. A few of the many victories achieved in this car with Gough at the wheel include 1st place 2002 Monterey Historics under Steve Earle, 2nd place Group 6 2012 Sonoma Historics, 2nd place Group 8 2008 Sonoma Historics, and the 2007 Rolex Award for Best Presentation at the Monterey Historics. The current owner purchased the car in August 2012 and has raced it along with his son, competing in several recent vintage events throughout the span of his ownership.

Notable races from prior ownership include 1988 La Carerra, Riverside, Willow Springs, HMSA Laguna Seca, HMSA Thunderhill, 2002 Monterey Historics 50th Anniversary Corvette, Sears Point, 2005 Reno and Monterey Historics, 2012 Sonoma Historics, and the 2012 Monterey Reunion. Under current ownership, this car has greatly benefited from the top-tier services of race car specialists at Intrepid Motorcar Co. Sparks, NV. Records for services accompanying the car span 2012 – 2019. Under current ownership, the car was actively campaigned in races including Rolex Monterey Reunion and Pre-Reunion events 2013, 2014, 2016 (winner Group 6B race), 2017, 2018, and 2019 where it rarely finished outside the podium against heavy duty competition including 289 Cobras and Big Block Corvettes. Records accompanying the car include race results, dyno sheets for the engine, and detailed mechanical invoices as well as trackside service records and prep on the car. Items of note include the purchase of two Richmond gearboxes (2014), engine assembly and dyno services (2016) and in 2017 rebuilding the brake calipers and rebuilding the rear end and replacing the Positraction clutches, hub bearings, various seals, and new wheel lug studs. In 2018 the carburetor was rebuilt, new front brake calipers installed, engine nut and bolt performed, and dyno test performed. The car was last prepped and run in 2019, though over the past three years it has been started and driven but not in competition settings.

According to the engine stats recorded with the car, the 327 V8 engine is outfitted with a Holley 4bbl carburetor and fitted with an Acusump manual unit with 75 lbs holding pressure. The rear end installed in the car today is 3.90 unit (4.11 Dana unit included with spares) and the transmission is a Richmond Super T-10 4-speed.

Today the overall condition of this Corvette is consistent, resolved, and reflective of racecar cosmetics for a car that has been properly prepared and lightly speckled from track time. Although the finish is generally good overall, the paint has chips in various forward-facing surfaces, checking in some areas of the paint, and other typical signs of track use. The white paint is glossy, the body panels are well-aligned, and the power bulge hood is nicely accented by the twin blue racing stripes covering the top centerline of the car. The hood releases from the inside and hinges forward, consistent with the stock configuration. Both doors open and shut without issue, via stock chrome plated door handles and factory hinges. The retractable headlights and mechanism have been removed to further lighten the car and the front edge filled in smoothly with the parting lines painted on to emulate the production appearance. All major chrome trim has been removed, lightening the already lightweight fiberglass body, though the Corvette characteristic quad taillights and chrome plated side view mirrors remain in place. The overall exterior presentation is trim and purposeful with a commanding stance resting on racing tires and painted blue American Racing 15” wheels.

Inside the cockpit, a specialized contoured driver’s racing seat has been fitted along with a robust roll bar which extends to both side portions of the cockpit offering cross-sectional side protection and under-dash forward protection. The roll bar construction extends to the rear portion of the car offering both safety and structural rigidity to the platform. The remainder of the interior is sparse and functional with generally good cosmetics including an original Corvette twin-binnacle dashboard and a mix of various later model gauges, all of which occupy the original dashboard openings. A discretely installed brake bias adjuster has also been installed. The driver’s seat is outfitted with a five-point Simpson harness, dated December 2021. The inner door panels retain largely stock black trim, the passenger seat is a low-profile racing bucket unit, and the low-profile plexiglass windscreen retains many of the event stickers from various tracks where this car has raced.

Under the hood, the 327 cubic inch V8 engine is outfitted with durable racing components and features that remind us of how robust and effective the powerful and torquey 327 engine has been for so many decades. The flexible and purposeful engine design is compact and potent, outfitted with woven stainless hoses and anodized fittings. Importantly, there is a fresh Intrepid Racing built GM V8 engine included in the spares. The engine compartment is tidy and roomy, making for easy trackside adjustments or changes as needed. A dual chamber master cylinder, C&R Racing aluminum radiator, tuned headers with dual exhaust, and Holley carburetor complete the package. Underneath the car, the suspension, driveline components, performance equipment, and brakes all appear properly serviced and typical of a racecar prepared by experts in vintage racing. The twin exhaust pipes are outfitted with a set of mufflers and the tailpipes exit in central dual configuration. Also, this car is equipped with a very important and cleverly designed anti-flex trunnions around the steering box which alleviates steering box flex, a condition that plagues competition Corvettes resulting in imprecise and soft steering. The anti-flex trunnions reduce this very effectively.

This Corvette comes with an enormous trove of high-performance specialty parts which are outlined in the spares listing for various loose and boxed parts accompanying the car. Notable items in the spares package include a spare, fresh GM V8 engine which has been professionally rebuilt by Intrepid Racing, a spare GM gearbox, a spare T-10 gearbox, a pair of VDB fiberglass monospring leaf springs, Lonestar brake calipers, 4.11 Dana rear end, various sway bars, various plexiglass windshields, a spare set of American Racing wheels with GoodYear tires, a new Holley fuel pump, new master cylinder, substantial suspension parts and hardware, to name just a few of the key items in the spares package.

With more than 50 years of documented history, recent professional preparation, and decades of vintage races, this 1965 Corvette race car is ready for another exciting chapter in its racing life. A remarkably affordable machine which has successfully competed against million-dollar vintage 289 Cobras, Bizzarinis, Jaguar Lightweights, and others, running at the front of the pack. This vintage Corvette is a proven, reliable performance machine ready built to effectively compete at many of the numerous exciting vintage events hosted throughout the world. 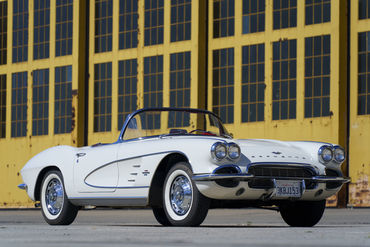