In 1965 if you wanted to go fast, go racing, and do it in an American car, your options were a bit slim. But with the announcement of the all-new Mustang, all that changed when Carroll Shelby put his name on the first 1965 Mustang fastback. Packed with the 289/271 hp engine and a host of precise improvements, Shelby American transformed the Mustang into the now legendary Shelby GT 350. The Hi-Po “K-Code” engine package was robust from a power perspective, but it needed just a bit of clever suspension engineering, fine tuning, and a dose of Shelby bravado to transform the Mustang. Bolstered by millions in Ford racing dollars and track support, it didn’t take long to get the word out - Shelby American built a performance car that could compete against any of the high-priced European offerings, doing so with American reliability without costly maintenance or difficulty acquiring parts. The Shelby GT350 immediately distinguished itself on the racetrack, besting Jaguars, Tigers, and Corvettes in a wide range of competition events.

As the first of these on the market, the 1965 model was built to meet the minimum homologation efforts for SCCA racing. The 1965 GT350 models would begin assembly at the San Jose Ford plant with delivery to Shelby American Inc., Venice, CA assembly plant. All cars destined for Shelby American were Wimbledon White and trimmed with black interior. Once delivered, a few options were added, often installed by dealers at customer request. Shelby modifications included converting the rear seating area to a lighter weight storage platform, relocation of the spare tire atop the storage platform, a 16” Shelby Cobra steering wheel, Koni adjustable shock absorbers front and rear, anti-tramp bars fitted above the rear axle, cables to limit rear axle travel, a prop shaft safety loop, aircraft style 3” safety belts, Autolite battery (rear mounted in early versions) and a special dash binnacle mounted at the center of the dash including a tachometer and oil pressure gauge. Rare in number when produced and highly desirable today, locating a drivable example combining known history and enjoyable cosmetics is often a challenging undertaking.

Backed by copies of the original delivery invoice and documented by the Shelby American Automobile Club Report, 1965 Shelby Registrar verifying the Ford VIN and Shelby assignment, SFM5S342 was dispatched from the San Jose, CA plant and received at Shelby American May 27, 1965. As #342 of just 506 street 1965 GT350s built, it was completed June 2, 1965 with blue stripes added at no additional charge. SFM5S342 was shipped to Herb Tousley Ford, Inc. White Bear Lake, MN, August 11, 1965. The first owner was Jon Daniels, Chaska, MN. Chaska had the engine rebuilt in 1975. The next known owner was John Robert Cardarelle, Edina, MN, who purchased the car in 1979. At the time, the car was outfitted with a Mallory distributor, Hooker headers, rear-exiting exhaust, Hurst shifter, fold-down rear seat, and the Detroit Locker was removed but still retained as a spare. Also at that time, SFM5S342 had been painted a different shade of white, wore a set of AMC wheels, and a Corvette style hood with a snorkel-type hood scoop. Retaining the car until 2005, Cardarelle sold the car to Mark Boen of Carmel, CA, who prepared the car for vintage rallies. Being very careful to build the car properly but not modifying the original integrity of the body, Boen commissioned rework on the engine, transmission, steering, brakes, and other mechanical updates built into the car. Records accompanying the car indicate body and paint work was performed including replacing the left rear quarter panel with a fresh panel, properly treating areas of body corrosion in the inner rear panel and replacing the hood. Thankfully the original 289 Hi-Po engine was removed, put on a display stand and retained with the car in anticipation that the next owner would return the car to original standards.

The current owner purchased the car in 2016, driving it occasionally in the modified configuration. In September 2020, the owner commissioned experts at Burlingame Motors, Inc. to carefully reverse the modifications the previous owner had implemented, returning the car to as close to factory stock condition as possible. During the mechanical restoration, invoiced at over $20,000.00, the previously rebuilt original 289 K-code stamped Hi-Po engine, having been retained on a display stand, was reunited with SFM5S342 with a host of other detailed mechanical items, then mated to a correct 4 speed transmission, correct shift linkage, and clutch rod. A new heater plenum, heater core, and NOS heater cables were also installed. Returning the car to original specifications, the installation of the correct rear differential pumpkin, OE brakes, master cylinder, correct brake lines, and front suspension components were also done. A new water pump, starter, carburetor rebuild, and numerous other details to best reflect the specifications of the original 1965 build. After the engine installation was completed, the car was test driven and sorted out during a two-day period.

Today this Shelby GT 350 presents in ideal condition for enthusiasts who enjoy driving their cars. The Wimbledon White paint has been properly applied, but over time various front stone chips have speckled the front valance, front fascia, and lower rocker panels. Though the paint finish has minor flaws, the overall presentation is quite nice and perfectly suited for worry-free driving, particularly for vintage events. The metallic blue body stripes and rocker panel accents are correctly applied while the hood, doors, and trunk lid show very good panel gaps, consistent with production standards of the era. The exterior chrome and various polished trim, emblems, and badges are all in excellent condition. The glass, lenses, and lighting also appear in excellent condition with some minor stone chips in the windshield. The original type wheels are in excellent condition with correctly polished surfaces, showing no significant scratches or marks and correctly finished satin cast recessed areas, capped in the center with CS chrome plated hubs. The tires are newer type BF Goodrich Radial TA 215/60 R15. The car is outfitted with correct type side exit exhaust, a feature unique to 1965 models.

The interior has been faithfully restored using correct interior components, correct black vinyl, and appropriate attention to detail. The unique Shelby dash pod is correctly in place, sporting very nicely finished instruments, and authentic main dashboard instruments and molded dash pad. The seatbacks have relaxed a bit since restoration, and the carpeting has faded in some areas, but overall consistency and presentation of the interior is very cohesive. The rear parcel shelf is correct as is the rear spare tire storage mount and black cover. The interior is finished off with a very nice reproduction wood rimmed steering wheel. The trunk compartment appears to be largely original, retaining what appears to be the original paint and finishes, and modest evidence of use over the past 50 years.

Lifting the fiberglass and metal hood, the original factory stamped K-code 289/271 HiPo engine has been outfitted with proper reproduction components consistent to original standards. The painted finishes throughout the engine compartment have been applied with originality in mind, using correct hardware, hose clamps, hoses, and wiring, with a few concessions deviating from the original specs including a modern battery, contemporary oil filter, and a different air cleaner element and lid. The engine compartment presents as a nice combination of restored features and finishes from the previous restoration and newer finishes performed during the current engine installation. Although some time has lapsed since the restoration was completed, SFM5S342 displays cosmetics and mechanicals consistent with the original purposes Shelby had intended for these performance cars.

Underneath the car, the stamped factory chassis floor, welds, and braces appear to have no significant deviations from originally constructed factory cars. The larger capacity cast aluminum COBRA oil pan is in excellent condition, as is the casting for the T10 transmission, correct leaf springs, and small chamber mufflers fitted to the side exhaust. The underside is generally clean though moderate oil weeping is evident from the rear main seal. Certainly, exhibiting evidence of use over the years, the red oxide paint on the unibody floor panel appears to be unrestored, likely a combination of original and restored finishes with much of the more recent restoration efforts evident in the front suspension components, correct Koni shocks, exhaust that appears recently installed, and a correct ‘pumpkin’ rear end cluster, very likely the original unit that had been shelved years earlier.

SFM5S342 starts easily and idles with that unmistakable throaty V8 burble. Acceleration is fantastic from the Hi-Po 289. The combined front disc/rear drum set up and Koni shocks deliver a confident performance experience even when driven mildly on the street. The car is accompanied by copies of original Shelby documents, two binders with receipts for various work performed under previous ownership, a set of branded rubber floor mats, scissor jack, handle and two quarts of Royal Purple engine break-in oil.

This 1965 Shelby GT 350 is perfect for enthusiasts who like to drive their cars, use them with the original vision of performance driving, and not fuss over perfect finishes. Correctly prepared with the original engine and Shelby American Club letter validating the Ford VIN and Shelby number corroborating the authentic build history, this Shelby is ready to deliver all the driving excitement, power, and performance that so rightfully contributed to making the GT350 the legend it is today. 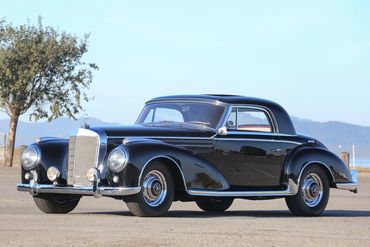 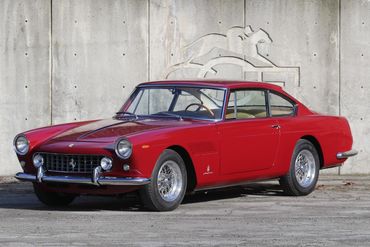