When thinking about an American V8 powered open sports car with British heritage and Shelby support, one almost always thinks of the Cobra. But shortly after its debut, the Sunbeam Tiger firmly established its own unique and desirable reputation as a high-performance sports car; also prepared by Carroll Shelby and Ken Miles. Offering distinctive styling combined with durable American power and snappy torque, the Tiger won the hearts of sporting enthusiasts seeking a road car, but also earned the praise of racing enthusiasts with near immediate class dominance in the 1964-1966 Works European rally program. During this time, many Tigers also enjoyed sports racing success in the hands of intrepid privateers who doggedly chased down some of the best team prepped cars with a ferocity that lived up to the Tiger name, including one voraciously intimidating Tiger dubbed “The Monster”.

The story of the Monster begins in 1964 when a pair of Sunbeam Lister Tiger Le Mans Coupes were hand built with factory support to compete at the prestigious 1964 24 Hours of Le Mans race. Although both entries suffered mechanical failure during competition, both cars established their reputation as powerful competitors. Shortly after the race, one of two cars, chassis ADU 180B, become the property of Rootes factory test driver Bernard Unett. An experienced racer, Unett had previously raced Alan Fraser-prepped Hillman Imps and Sunbeam Alpines to great success. After seeing Unett win 11 of 20 races for the 1965 Autosport Trophy in the Lister Tiger Coupe, Fraser approached Unett to partner on a specially built Tiger to compete in Rootes Group’s 1966 circuit racing program. As Fraser had both considerable resources and substantial racing experience, it was evident that their car would prove to be a powerful contender. That car would become “The Monster”.

Beginning with the Le Mans prepped Tiger, Fraser’s team carefully removed the driveline and various special ultralight aluminum body panels from the Le Mans Coupe. These critical lightweight features would be the basis of the Monster. The stock Tiger stance was lowered by three inches, the fenders widely flared to clear Le Mans-style Dunlop 15x7 magnesium wheels, and oversized Girling brakes also removed from the Le Mans car, were installed. As the season progressed development continued with improvements in handling, removing more weight, and adding various ducts and vents, carefully applied to the alloy body to improve airflow for brakes and to ventilate cockpit heat. Four twin choke Weber IDA carburetors fed the Ford 260 V8, an oil cooler was positioned behind the open grill, and the cockpit was further spared any excess weight. With the lightweight body and tuned V8 engine, the Monster was ferociously fast, winning frequently in race after race, finishing within inches of winning the 1966 Autosport Championship. In 1967, the Monster was shipped off to Tenerife, Canary Islands, and by 1968, Alan Fraser sponsored the car with driver Peter Harper. Shortly thereafter, the Monster was sold to the Hernandez Brothers – Equippo HH, where it participated in a number of events including racing in Spain through the mid 1970s. By the late 1970s however, like many racecars, its fate slowly faded into racing obscurity. In 1979, Ken Dalziel discovered the Monster languishing in Tenerife along with a number of other significant Tigers, ultimately shipping six cars to England. Realizing he was up to his tail in Tigers, Dalziel concluded that the Monster needed a proper home, one where the car could be restored to its former glory. In 1982 Dalziel sold the Monster along with another Alan Fraser Tiger to the current owner, a recognized Sunbeam Tiger and Alan Fraser Racing expert, and owner/restorer of the Lister Tiger Coupe No.9 – ex Bernard Unett. The Monster was then professionally restored for vintage competition use, under the careful study of factory photos, archived reference information, and interviews/discussions with various members involved in the original build.

In 1966 a detailed period account of the car as well as a track test was written by John Blunsden and published in Motor Racing. A 2012 Classic and Sportscar magazine feature by Julian Balme further recounts the detailed history of the car with detailed references on the restoration and more recent vintage racing.

The restoration process began in 1998 with the body carefully restored to a very high standard by Colin Kimmins, Lake Havasu, AZ with paint and finish work performed by Steve Alcala and Dan Walters. During the restoration, every effort was made to utilize the proper lightweight alloy panels originally from the Le Mans car. Remarkably, the factory-built lightweight alloy hardtop (made at the factory on commission by Fraser) was not only still in place, it remained in excellent condition. In the earlier iteration of the restoration, the car was outfitted with as many of the components from the rebuilt number 9 Le Mans car. In this iteration, the Monster participated in many racing events from 2003-2006. In 2006 the decision was made to return the car to the most accurate representation of the 1966 configuration with the Le Mans running gear. No easy undertaking, one of the many goals was to return the car to the originally implemented Bernard Unett, Watts linkage suspension. This installation required a great deal of work on the bodyshell which had been originally formed with chassis supports for the links. This structural element had been restored during the body restoration, but the mounting points had not been used. For the rear end, the differential cover was significantly strengthened with steel plates and square tube, and very unique brass fins individually braised into the cover. Unett most likely had this original part made in the competition department at the factory when developing the Le Mans car. An expert fabricator at Sonoma estimated 40 hours in order to create this single unique but important feature. Further significant efforts included new front suspension, a new set of custom-made hubs patterned specifically from the Le Mans car, and improved steering completely rebuilt based on the original Unett design and refined by Tom Hall of Modtiger Engineering.

By 2010, a set of Dunlop style wheels were commissioned for production in a newly made mold, cast from one of the original Magnesium Dunlop wheels. The original wheels were extremely light and thin, and thus cracked easily. None of the original mag wheels could safely be used for competition, so newly made alloy castings were poured, machined, and mounted. At this same time, correct custom-made pin drive hubs were fitted along with Girling CR (Front and BR (rear) calipers were installed similar to units installed on Cobras and GT40s. Additionally the available prototype Le Mans Tiger featuring a Brian Lister dual circuit master cylinder setup was studied and a hand fabricated version was fitted specifically for the Monster.

In 2012 the car was once again ready for the track. A spirited completion was motivated by an invitation to participate at the Goodwood Revival to run in the Fordwater Trophy. In preparation, a fortuitous meeting with Tom Dyer (a professional driver and coach) helped to set up the Monster with proper spring, damper and anti-roll bar changes, resulting in significant improvements in lap times at Sonoma Raceway. After success running as high as 2nd and finishing 5th at Goodwood in the Fordwater Trophy run, the car also attended the Sunbeam Tiger Owners Club National meeting and Concourse where it won a number of awards. It was later exhibited at the Club stand at the Classic Motor Show in Birmingham England.

Upon return to the US, the axle ratio was changed to a 3.73, where it next participated at the 2013 Sonoma Historics with Tom Dyer again driving to fourth place, also winning the “Best Presentation and Performance” trophy from Steve Earle. The engine was then freshened by Tony Oddo and kept as a spare. Expected power for that engine would be in the 470 – 490bhp on the dyno with around 400 lb. ft. of torque. Oddo was then called upon to build a “Goodwood” motor using an A-4 block with a stroker kit to 347 cu in. This engine, now installed in the car, is a fantastic build with dyno figures at 509 BHP with over 500 lb. ft. of torque. The car was last raced in 2016 and 2017 at Sonoma. Since then, activities have been limited to test days and trips around the track and shop but not on the racetrack.

The interior is finished with considerable attention to the original configuration having been significantly lightened to the bare metal and fitted with key instrumentation to monitor critical engine features. A handsome period wood rimming steering wheel adds a reminder of the period this car was constructed where quality and excellence in design was an integral part of performance. A contoured driver’s side bucket seat, headrest, and built in roll bar are supported by a contemporary racing harness (dated 2021). Here too, as with the exterior, the interior finishes are very well prepared and remain in excellent cosmetic condition. A final touch in the interior, the alloy gear shift knob sits proudly above the familiar gear shift T-handle and chrome retainer ring. Even the steel door inner structures have been cleverly lightened with large holes to reduce weight.

Under the hood, details for the engine are prepared with historic reverence and modern safety elements to bring out as much performance as possible from the powerful 347 engine. The beautifully finished components, gloriously trumpeting Weber air horns, and hand formed alloy features combine vintage authenticity with contemporary racing advances. Under the hinged trunk lid, a fuel cell with alloy surround is mounted along with the battery and fire suppression canister. The underside of the car is remarkably clean and consistent, exemplifying the high level of restoration and care given to this car over the recent and current 38 years of ownership. There is no visual evidence of any structural compromise to the floor pan or chassis components.

Beautifully restored by a cadre of Tiger experts following a balance of original features and appropriate performance upgrades, the “Monster” is considered among the most exciting competition sports cars from the 1960s. Boasting a history of inception from Carroll Shelby and Ken Miles, to Alan Fraser, and backed by consummate long-term ownership and professional restoration, the Monster continues to stand as an icon of Anglo-American performance from one of the most inspiring periods in modern racing. Documented with period racing history, extensive research, and professional preparation, this stunning Tiger is a superb and ready example, eagerly ready to reward the driving ambitions of the next fortunate owner. 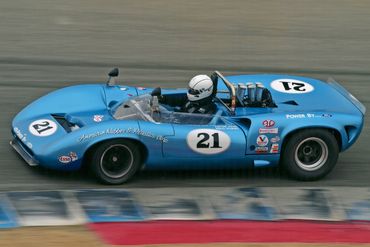 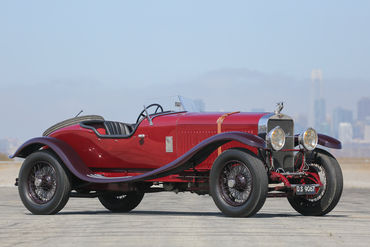