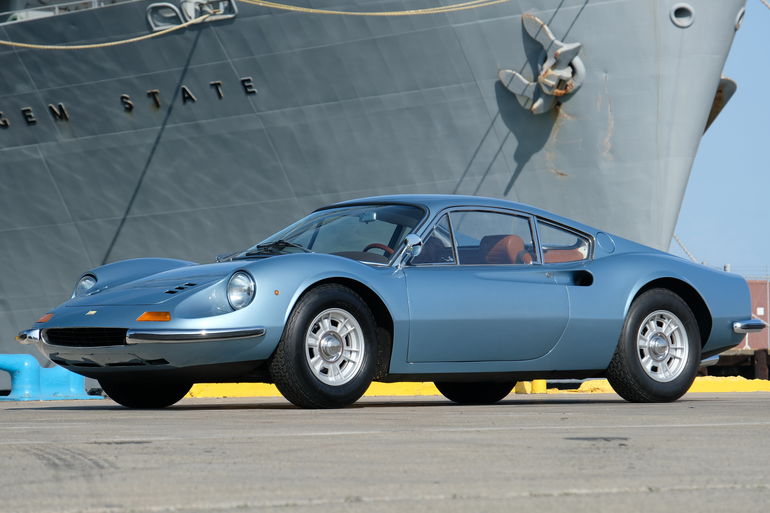 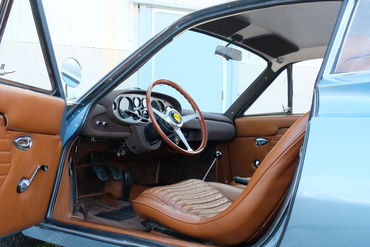 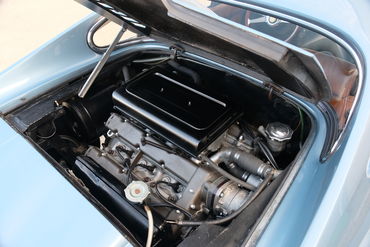 Designed by the legendary Leonardo Fioravanti, responsible for some of the greatest Ferrari designs while at Pininfarina, the original 206 Dino GT was a delightful design, full of undulating Italian curves, sensuality, and innovative performance engineering inspired by racing successes Ferrari had achieved with their mid-engine prototypes. The heart of the Dino was the compact 65 degree V6 engine displacing 1987cc. With triple Weber 40DCF carburetors, the engine offered 160hp, a potent amount for a lightweight two-liter car. The transverse mid-engine design mated with a 5-speed transaxle offered spirited acceleration, besting many top competitors using larger displacement engines. Attributed in name, if not certainly in heart, to the tragically lost Dino Ferrari, son of Enzo, the Dino brand would launch Ferrari into higher levels of production and world-wide acclaim at a more achievable price. The powerful engine, however, was more the brainchild of legendary Vittorio Jano, of Lancia and Alfa Romeo fame, a detail that Jano graciously never boasted out of respect to the Ferrari family, as he, like Enzo would also tragically lose his son in 1965. Shortly after release, the 206 advanced to the larger displacement 246 Dino GT as public demand grew and production output increased for this new mid-engine car. The 246, stamped in steel using higher volume practices, would become one of the most popular sports cars of the period. Europe and America loved the sleek bodywork and nimble performance, responding with record sales and accolades with sustained popularity lasting more than 50 years after the Dino was first introduced.

The 246 Dino would ultimately establish Ferrari as far more than a small volume manufacturer, paving the way for decades of mid-engine performance cars. Early production 246 Dinos are referred to as “L Series” cars, uniquely produced in 1969 and 1970, retaining as much of the original lines and features inspired by the 1965 Paris Salon 206 GT Speciale and Pininfarina 1966 Turin Salon Dino Berlinetta GT. Over the years, L Series examples have become more sought after due to their clean and pure body design, elegant detailing, and production rarity. Distinct L Series features include slimmer front and rear bumpers, an external boot lid release button, single knock-off spinner-type wheels, head rests cleverly mounted on the rear bulkhead, and a steel body with alloy front lid.

According to author Matthias Bartz, “Dino Compendium” and factory records retained by the Dino Registry, chassis 00550 was completed November of 1969 and delivered new to Italy. One of only 81 cars built in the 1969 year of L series production, this particular car was reportedly owned for 31 years by the same owner who purchased it in 1986. The car was stored for a few years before being sold through a dealer and subsequently acquired by the next owner who then consigned the car at Fantasy Junction, where, in 2018 it was purchased by the current owner. Prior to current ownership, services included rebuilding the carburetors, installing new hoses, new brake lines, and all fluids changed.

Today this Dino presents very nice driver’s level example, in an outstanding color combination. The paint has evidence of age in various places, including a previous passenger side door ding approximately the size of a quarter at the forward door crease, which has been improved with touch up. Overall, the finish has been properly detailed and professionally corrected in a few places delivering a cohesive and honest presentation. The doors shut with a crisp latch and hold position flush to the body surfaces, with recent repair work to the hinge limit pins making door swing correct to factory specifications. Both the front lid, engine, and trunk lids open and close properly with very good panel gaps. The chrome trim is good overall on the top surfaces of the bumpers with mild hazing evident, though still nicely reflective. The side view mirror, window molding, emblems, and badges are all in very good condition. Glass lenses and turn indicator lenses are also in nice condition and properly detailed. The Cromodora wheels have been more recently refinished and maintain an excellent luster including the chrome center hexnuts, which were unique to the design of these early L Series Dinos.

The rare and very nicely preserved Arancia interior reflects one of the most beautiful color combinations ever offered on a Dino, especially accented against the metallic Azuro exterior body color. Not only are the seating and door panel surfaces supple, clean, and nicely presented, the original early seating architecture featuring rear bulkhead suspended headrests and perimeter seat bolsters are all very nicely retained with good foam structure, solid stitching, and smooth coloration. Carpeting and floor mats are nicely accented in a rich brown tone echoing the mouse fur dash color and black interior accents. The Arancia center console is very nicely presented with the 5-speed gated shift plate, signature Dino details, and recently sorted electric switches. The delightful array of instruments is nicely detailed and set off by a handsome and factory correct recently replaced steering wheel (itself a $2,500.00 purchase), featuring a bright yellow Dino center emblem. In all, the desirable interior presents a handsome addition to this already rare L Series, making it very likely one of the rarest color combinations in this historic early production sequence.

Under the hood, the factory finished Dino V6 engine has been thoughtfully preserved and beautifully detailed with originality in mind. The majority of the engine components have been preserved and maintained and benefit from the recent engine service and cosmetic refinements performed while many components were removed and serviced. The earlier series raw alloy engine castings are honest, clean, and unpretentious, purely reflective of the mechanical beauty as they were naturally cast when new. A few of the engine accessories have been refinished in select areas including the satin black air cleaner and other components. The rear trunk area is nicely preserved with correct black carpeting and the front storage compartment features a full sized spare tire with matching wheel, and a correct, preserved inner molded tub. The underside of the car is honest in presentation but has not been finished to a high level of detail. While no evidence of major damage or structural compromise has been noted in the chassis, there are road marks and various scuff marks apparent in selected underbody areas.

Driving this Dino, one is reminded of the very pleasant balance achieved with the mid engine layout and V6 power. The gearbox shifts smoothly, and power comes on strong in each gear, pulling through low rpms and delighting drivers with a wide powerband and delightful sounds particularly in the higher rev range. Braking and suspension are responsive for the era, modestly improved by a set of correctly sized Michelin XWX tires showing ample tread. The car is accompanied by the jack with original bag and emergency triangle, hex-nut wrench, an original owner’s and service manuals, in an original leather pouch.

The 246 Dino GT-L offers many of the very best features of a vintage Ferrari while reminding anyone who appreciates a modern Ferrari that this is the modern sports car that established the formula for decades of future mid-engine Ferraris. With its stunning Pininfarina design, beautiful color combination, rare one of 81 L Series production numbers, and nimble performance capability, the 246 Dino stands today as an enduring passionate Father’s salute to the vision of his young son Dino Ferrari; a rolling sculpture celebrating their mutual dedication to sports cars and a lasting legacy of uncompromising beauty. 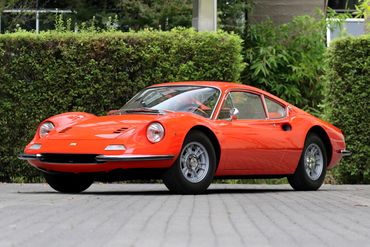