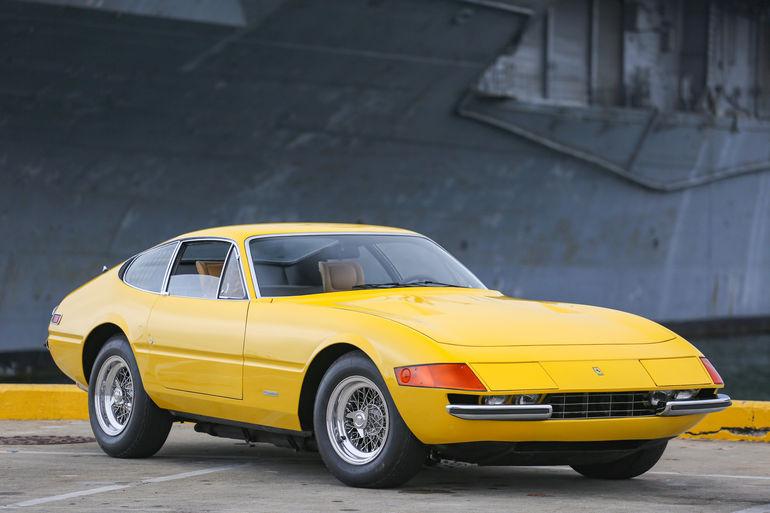 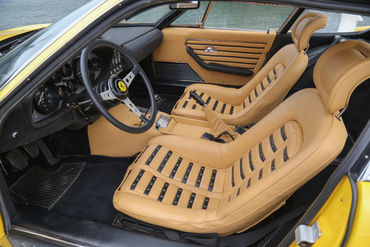 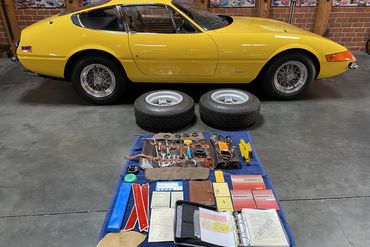 Debuting at the 1968 Paris Auto Salon, the Ferrari 365 GTB/4 was nothing short of a revelation of design and engineering. With times rapidly changing and Ferrari needing to re-establish their leadership position against growing and formidable competition, Leonardo Fioravanti of Pininfarina delivered a chiseled fresh body design with crisp defining lines and sweeping elegance, placing Ferrari substantially ahead of other sports car manufacturers. The new 365 GTB/4 was a crucial effort for Ferrari, replacing the aging 275 GTB/4 which had been experiencing lumbering sales. And while technology was advancing, and mid-engine layouts were entering production, no one suspected that the Daytona would be the last of the sanctified front engine V12 models for many years to come.

Beautifully appointed and prohibitively expensive when new, the “Daytona”, as it ultimately became known, in honor of the famed 1-2-3 1967 24 Hours of Daytona Ferrari finish, would become a fixture of Hollywood movies and high-end brand marketing. Outfitted with the 4.4 Liter Colombo, quad-cam V-12 engine, fed by six dual-throat Weber carburetors, the Daytona delivered a commanding 352 hp in stock trim with a top speed just over 170 mph. The beautifully sculpted Daytona offered fantastic performance and touring capability in a remarkably agile package. With a mere 1,400 produced until 1973, Daytona remains sought-after by enthusiasts seeking the finest and most original examples for their collections.

According to Ferrari Market Letter reference information on file for this car (H, Raab’s Ferrari Serial Numbers Part 1, 2nd edition) this car was logged as assembly sequence number 346 with body number 330. Being specified for US delivery, the car was fitted with factory Air Conditioning, air pollution equipment, and wire wheels. According to the Chinetti Check Register, a $2,500.00 deposit was placed with the car October 1970 with Chinetti by D. Bernheim. Documented as the second North American Daytona authorized and ordered for US import, the car was delivered to Chinetti motors, Greenwich, CT (Ferrari Circulare Tecnica No. 174). The original colors were noted as Blue Dino 106-A-72 with beige VM 3218 interior, a/c, Voxson radio, and wire wheels. Though not much is known at this time about the first owner, the second owner purchased the car on December 3, 1973, and retained it for a remarkable 44 years. The long-term owner showed the Daytona occasionally including an appearance in 1976 at the Ferrari Club of America Annual Meet. At this event, the car is noted as having been painted yellow with tan interior – a repaint believed to have been performed on or around 1974/5.

After long term ownership and still retaining the original matching numbers engine and gearbox, the owner at that time passed away, leaving the Daytona to his heirs. The car was then offered for sale around 2017, at that time showing 58,894 miles. Records with the car indicate an extensive restoration from 2003-2006 including removing the hood, decklid, and doors, applying rust proofing to the inside of the doors, and epoxy priming the body surfaces. A fresh coat of fly yellow paint was applied and finished with all trim polished, new door seals and felts, trunk gasket, and detailing performed to a high level. Additional work is noted in the itemized receipts including extensive work on the door window channels, window mechanisms, and vent windows.

As part of the restoration, the interior was also addressed in 2005, including new webbing and foam for the seats and headrests which were covered with original factory leather material sewn in Italy. The center console was also recovered using the same Ferrari leather sourced from Italy as well as the door panels, again using the same leather sourced from the Italian supplier. The steering wheel was sent out to be recovered in black leather, the black carpets were redone both in the cabin and trunk, and the seatbelts and dash were redyed. The final receipt included in the records indicates the restoration was completed December 2005. It is also important to note that the records retained from the restoration during this period also contains detailed information on the brakes, suspension, and engine work performed on the car.

In 2008 a $12,000.00 invoice indicates the car was extensively serviced including an oil change, new spark plugs, new cam cover gaskets, new CV boots, differential seal, carburetor adjustments, new distributor housing gaskets, transmission service, new ignition, fuel hose replacement, and a new battery. In 2009, with 58,237 miles recorded on the invoice, the gas tank was cleaned, and flushed, the oil pressure valve replaced, an oil change performed, and a new oil gauge was installed. In 2017 the car was removed from storage, serviced, and placed on display at the St. Louis Car Museum. Shortly after the car was offered for sale and subsequently purchased by the current and consigning owner.

Today this beautiful Daytona presents in beautiful condition, still reflecting low miles and modest use of recent years. Currently showing 59,361 miles, most of these miles accumulated during earlier years of ownership while under the care of the former long-term owner. The paint, though applied fifteen years ago, still retains a very high driver-quality gloss while the finish and detailing indicate high quality workmanship evident in all surfaces. The various exterior trim, emblems and details are beautifully finished, including crisp body line detail, nicely finished door jambs, and detailed inner strike surfaces. Chrome and polished metals are also in excellent condition showing nearly no signs of age. All openings function as expected with tight closures and excellent gapping on the hood and trunk, however, both doors show slightly raised panel lines when closed against the rear fender shut lines. All four stunning Borrani wire wheels show their original stampings. Correct Michelin XWX 215/70 VR15 tires are in excellent condition, having been purchased in April 2020, along with correct inner tubes.

The interior is a wonderful combination of refreshed leather components and original finishes. The Daytona seats were properly reupholstered with excellent fit and stitching now showing some mild relaxing to the side bolsters. The original dashboard still displaying the original leather, is clean and taut with excellent finishes accented by stunning instruments, aluminum trim, and beautifully preserved switches. Even the factory air conditioning blows cold when activated. The tan leather console and door panels are taut, showing excellent fit, crisp corners, and very good stitching. The black carpeting is in very good condition. The interior presentation is very handsome overall with a cohesive high-quality feel to the materials and finishes.

The engine bay and engine are meticulously detailed and show the care indicative of expert workmanship. Restored finishes appear to have been correctly applied and have been properly cared for over the years as the car has been serviced and detailed. There are mild indications of use on the carburetor body surfaces, lines, and hoses but nothing to detract from a very pleasing impression both in the engine itself and the surrounding engine compartment details. The traditional Ferrari crinkle-black quad-cam finish has been faithfully presented, the diamond tufted silver hood insulation pad, proper engine compartment plaques, factory hardware, and hallmark V12 designations are all beautifully presented and correct. The trunk compartment is finished off with black carpet, concealing a fifth Borrani wire wheel and matching Michelin XWX tire. A complete tool roll and tools complete the trunk compartment.

The underside of the car shows excellent detail and tidy finishes with focus on authenticity and cleanliness. Correct exhaust and mufflers terminating with beautiful ANSA branded quad tips, proper raw aluminum engine and gearbox castings, correct lines and finishes, and orange Koni shock absorbers complete the appearance. There is evidence of minor gearbox oil weeping, but otherwise, the chassis is clean and dry, showing no visual evidence of structural damage or compromise to main components, rocker panels, or suspension.

The car starts quickly, running at slightly higher rpm as it warms up and settles into a deep V12 idle. Engaging the first of 5 speeds, you pull away with ease as the revs climb. The performance is smooth and engaging with excellent gearbox and clutch action, moving through the mid-range gears in local traffic in a surprisingly calm manner. Typical for these cars, a little play is noted in the front ball joints, but otherwise handling is quite nice. The dogleg 5-speed is smooth and easy to use with comfortable action through the gated selector, gently recessed into the leather wrapped console. Entering the highway, the engine revs rapidly climb, delivering a marvelous surge of power eagerly approaching the speed limit. Handling is one of the feature points of the Daytona particularly at higher speeds where the car reveals its true GT intentions, offering miles of enjoyable highway cruising or jaunts up to brilliant speeds enveloped by the rapturous sounds of the legendary V12 four-cam engine.

Beautiful by any measure, iconic for its ground-breaking design, and revered today as a hallmark of Ferrari excellence, this long-term owned Daytona is accompanied by copies of records and receipts from previous owners, a full complement of tools in an original tool roll, jack, fuse and light box, spare belts, collapsible safety triangle, workshop manual, a complete set of owner’s manuals and Ferrari leather pouch, and a spare set of four alloy wheels, two of which are the rare and desirable 9” width rears.

This Daytona is truly a refined and beautifully resolved example of Ferrari engineering and Pininfarina design. Ready for casual concours showing, touring events, or simply to enjoy as the magnificent road car it was originally intended to be, this Daytona is poised to continue the tradition of Ferrari excellence it achieved upon debut and has timelessly sustained for more than 50 years. 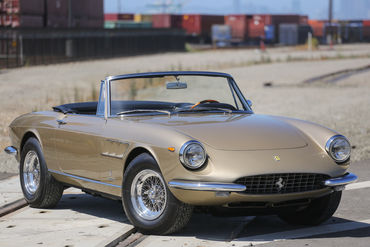