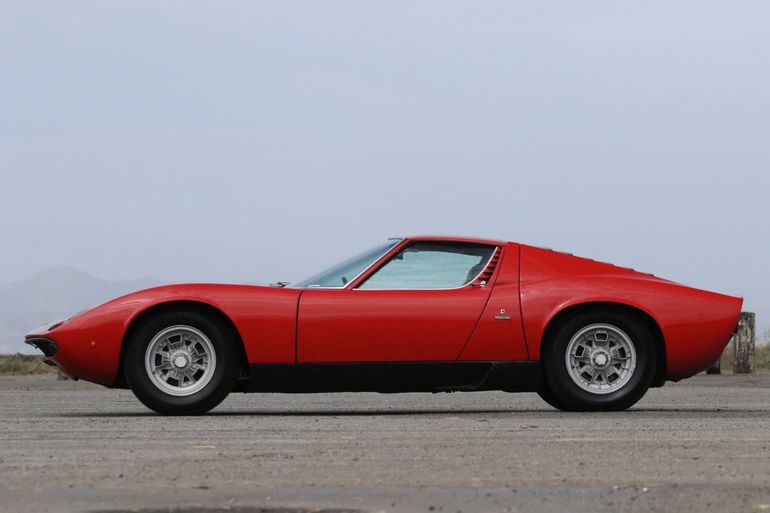 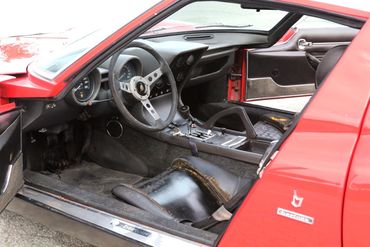 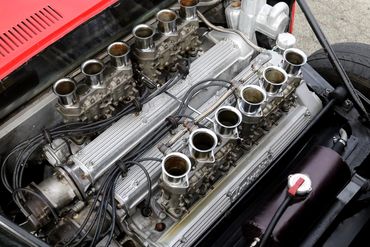 Few cars capture the imagination like the Lamborghini Miura. In the pantheon of great sports cars, it is rare to find a single car that is visually stunning, highly innovative, and the most sought all contained in one amazing car. Yet the Lamborghini Miura superlatively delivers on all counts.

Introduced in November 1965 at the Turin Salon, the first exposure revealed only a bare chassis, yet the radical mechanical layout stunned everyone who saw it. The sophisticated quad cam V12, mounted amidships and transversely, resulted in a compact and balanced platform, eschewing all previous front engine sports car conventions. As a result, the press speculated that Lamborghini could be building a race car. But this was far from the truth. Stretched for financial resources, Lamborghini had hastily assembled the show chassis primarily to generate publicity, yet it was immediately clear, the world wanted more. Excited by public interest, yet well behind the engineering clock, Lamborghini committed to building it as a production car. Bertone, the preferred coachbuilders for Lamborghini, were immediately contacted to design the car. At this time, both masters Georgetto Giugiaro and Marcello Gandini had overlapped tenure at Bertone with both having sketched concepts of similar design. Gandini would take the helm and execute the exceptional and sensuous final design. Over the years, the two masters would spend decades arguing over which had the more influential hand in the design. Either way, the result still remains one of the most stunning cars ever conceived.

In March 1966 the completed car was shown at the Geneva International Motor Show. As a steady flood of orders came pouring in, Lamborghini quickly realized their plan to build perhaps fifty examples seriously underestimated the market potential. When production finally ceased, over seven hundred Miuras had been constructed, launching Lamborghini into serious volume competition against top sports car manufacturers. Not only had Lamborghini beaten everyone to the mid-engine sports car manufacturing market, they literally invented the supercar, trouncing both Ferrari and Maserati, both of whom would cling to front engine road car designs for years to come. Indeed for Lamborghini, this was all the more shocking an achievement considering they were just a three year old company when the Miura was first unveiled.

Upon completion of the running show example, the Miura was taken to Monte Carlo for the Monaco GP, drawing crowds at every moment, despite other exotic cars on hand desperately seeing attention from the jaded wealthy elite. Upon conclusion of the Monoco GP, Lamborghini allowed legendary English journalist L.J.K. Setright to drive the car on a thousand-mile tour of Europe. In his extensive article published in “Car” magazine, Setright referred to the Miura as a ‘supercar’, thus inventing the term that continues to describe cars of premium performance and exclusivity.

The Miura not only embodied the power and performance of the 1960s, it was full of fashion and glamour. The vibrant colors, the mascara eye lashed headlights, and that distinct engine sound, all perfectly portrayed the passion and style of this bold era. In November of 1968, the Miura P400 was replaced by the P400S, with particular attention given to the engine, reshaping the combustion chambers, altering the camshafts, and improving carburetion, increasing output by an additional twenty horsepower, resulting in 365hp. Build quality was vastly improved as higher volume production methods were developed, electric windows were added, and a few amenities were added. The rear suspension was also revised, and on later cars, ventilated discs brakes were installed. With only 140 Miura S models built in the three-year production run from 1968-1971, the Miura S remains one of the most desirable of all Lamborghinis ever built.

This particular Miura S must be counted as one of the few remaining unrestored examples in existence. Having been retained under single family California ownership for nearly 45 years, the car is representative of original construction, an original interior, and retains the factory matching numbers engine. According to the Lamborghini Miura register, chassis #4356 is the 437th Miura built, and one of just 140 S models, the lowest production segment of all of the Miura Series. Production was completed December 10th, 1969 with engine number 30440 installed, still installed in the car today. The car was painted in the rare Bianco Miura (white) and trimmed with a Nero (black) interior. Having been retained by the same California family for nearly the entire period since new, the 38,000 kilometers (24,000 miles) shown on the odometer today are believed to represent the original kilometers driven since the car was delivered to the first owners.

Today, this rare Miura S represents everything about the original design and construction that made the Miura a legendary car. Having been repainted in bright red at some point in the ownership history, the paint work appears to have been professionally executed with good coverage in all areas. The overall paint is good, however the body surface contains light scratches, chips in various areas, and some minor stress cracks visible in a few corners. That said, the visual impression is still quite good and the overall body contours are representative of the original construction. The front and rear deck lids are formed of aluminum and thus are often not perfectly matched to the steel center section. However, the fit on this particular car is quite good and the latching for both units also very sound. The front valance displays some surface damage, typical of these cars, as many owners don’t realize that items under the front of the car can potentially damage the valance when the hood is lifted. The various trim, badges, and satin black venting are all in place, with the exception of the “S” on the rear panel (still showing the factory mounting holes), and one missing portion of the “B” letter on the Bertone side emblem. The beautiful Campagnolo cast wheels appear very nice overall with very good finish, though showing some finish patina on the knockoffs. The glass appears to be original, surrounded by trim that remains very good overall but with some dryness to the rubber. The headlights and taillights also remain in very good condition. Overall the car has a very complete and satisfying unrestored visual presence.

The interior remains original, showing several surfaces that appear quite good and serviceable including the door panels and a remarkably preserved dashboard. Particular attention will need to be applied to the seating surfaces, which can serve as patterns for restoration, but the center seat cushions will need to be remade. The headrests appear to be original and in good condition, indicating that the car may have been fitted with black leather and ecru fabric inserts, remnants of which can be seen in the center of the driver’s seat. The carpet appears to be original, but here too, much of it remains intact and complete enough to use for patterns in restoration along with the original knobby rubber floor mats, which will need to be replaced. The dashboard, instruments, and steering wheel are all original equipment displaying patina to the threaded stitching along the dashboard edge. The padded steering wheel rim will also need to be restored. Door panels, headliner, and other minor interior trim all are complete and can serve as patterns for accurate restoration or thoughtfully repaired and reconditioned to boast of the original materials and long-term ownership. While certainly a challenging part of any restoration, the rewards of combining originality with careful replacement materials could prove to be quite satisfying.

Under the hood, the beautifully designed Lamborghini V12 engine displays the hallmark castings and detailed finishes that distinguish the mechanical mastery of these fine cars. With the alloy rear panel opened, it is easy to appreciate the beauty and engineering of this drivetrain package. The engine compartment is clean and largely undisturbed with care having been given to retain as many of the original components as possible. The Weber carburetors are in place with beautiful velocity stacks and clean body castings. The engine castings are also clean and free from excess oil or significant corrosion. In all, the engine compartment is tidy and complete, reflective of recent service performed on the fuel lines and other elements such as hoses, clamps, and various hardware. The same is true of the front storage compartment which shows largely original surfaces, a full-sized spare tire, an original knock off hammer, and aftermarket jack. Underneath the car, the original construction shows no evidence of structural damage, however there is evidence of corrosion in the typical areas often found in the floor panels of a factory correct Miura. Suspension, engine castings, and various mechanical components visible from the underside are all sound, with some areas also cosmetically freshened. The mufflers and portions of the exhaust appear to have been recently replaced, as have the rear shock absorbers and springs.

The car starts and runs with quite good power and virtually no smoke when warm or cold. Although driving has been limited to brief excursions to confirm operability, it is recommended that additional mechanical inspection and further restoration be conducted to address the mechanical systems of the car more comprehensively. That said, the overall driving experience remains quite good, including excellent engine sounds, progressive acceleration, a smooth operating gearbox, compliant suspension, and functional brakes. Best of all, when driving a Lamborghini Miura S, there is little that can compete with the revelation that you are driving an icon of modern sports car history. And, as anyone will confirm, the experience of doing so is deeply rewarding, particularly being a fortunate owner carrying on the lineage of such long standing ownership afforded by a rare original car.

This matching numbers Lamborghini Miura S is ready for the next chapter in its remarkable ownership history. Sought after by collectors worldwide, the Miura S continues to be cited in the top ten of premier collector and enthusiast lists, revered for its unmistakable beauty, and recognized by respected experts as one of the most innovative performance cars of any period. Ready for sensitive refurbishment, enjoyable driving, restoration, or a combination of all of the above, either way, all roads lead to the inescapable joy of owning one of the most stunning and historically important cars ever designed.

This exciting restoration project Miura S is sold on a California title showing a 1971 year model. 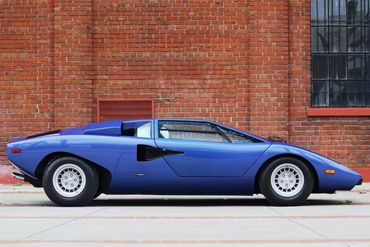 One of Only 160 Periscopica Models Constructed; Gandini's Purest and Most Striking Design. Matching Numbers,... 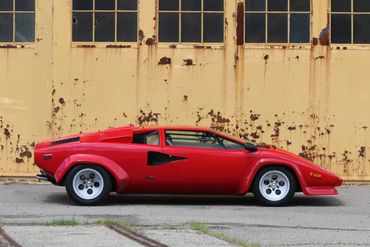