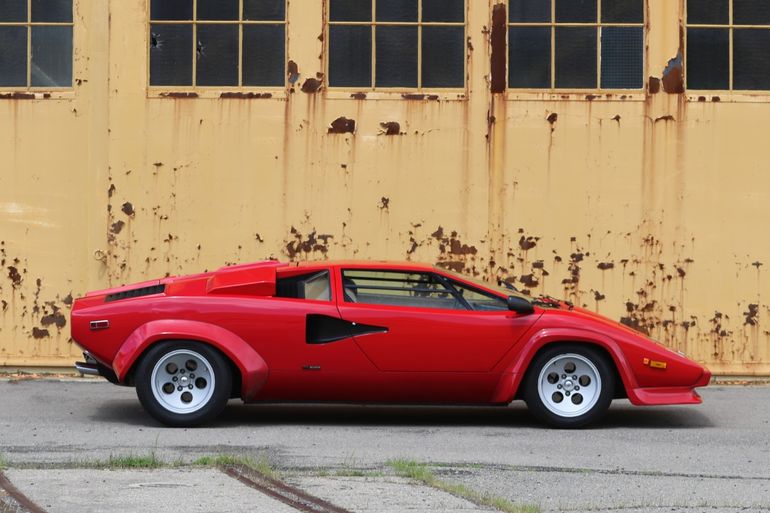 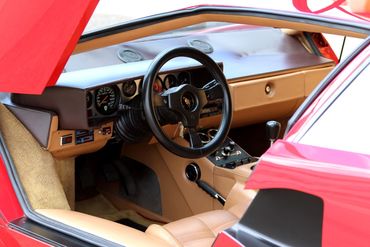 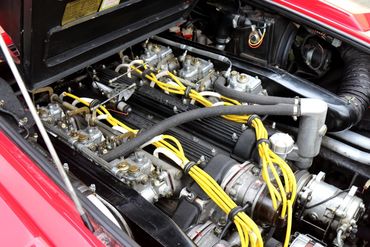 Legend has it that when disgruntled Italian industrialist Ferruccio Lamborghini found himself engaged with Enzo Ferrari in a heated discussion over improvements that should be made in his Ferrari, Enzo threw down the gauntlet “What do you know of sports cars? You’re a tractor maker.” Angered and determined, Lamborghini set about building not just a car, but a car company, staffed with premier experts, engineers, drivers, sports car enthusiasts, and passionate artisans willing to build exceptional cars.

The roster of talent assembled to form Lamborghini still reads today like a Who’s Who of Italian Car Design; Gian Paolo Dallara, Giotto Bizzarrini, and Franco Scaglione were all at hand to build their first offering, the GT350. A beautiful contender, the world (Ferrari included) had to take notice. Soon the remarkable mid-engine V12 Miura emerged, revolutionizing sports car design for the street and commanding worldwide acclaim. But no one was prepared for the audacious coming of the Gandini-penned Countach. It simply changed everything about sports car design.

When the Countach concept was unveiled at the 1971 Geneva Motor Show, no one expected Lamborghini would dare to produce such a revolutionary design. The daring cab-forward architecture, longitudinal V12 engine, and the aggressive geometric design captivated everyone with visions of the future. Little did anyone know that Lamborghini would begin production only three years later. To say that the Countach became an instant legend might seem bold, but this is exactly the case. No other car was so immediately received, revered, and celebrated in posters, advertisements, movies, and exotic car showrooms as the Countach. Picking up where the world’s first supercar, the Miura, left off, the Countach defined Lamborghini design language and philosophy more than any other car they made. The aggressive, geometric forms of the Countach continue to define every car that Lamborghini makes today.

In production for approximately fifteen years, the Countach evolved continuously. After the initial LP400 variant of the Countach, of which less than 150 examples were made, the most desirable Countach is the “low body” LP400S, which appeared in 1978. The LP400 was produced in three series, the first two of which had a lower roofline and ride height, which made the dramatic lines of the Countach all the more stunning. Astute collectors prefer these cars in part due to the visual impression of the original low body, clean uncompromised details, and the sculptural ferocity so dramatically infused by the unfettered geniuses who created this masterpiece.

This particular Countach is a highly desirable Series II “low-body” model, one of 105 built. This car is further distinguished as being the second to last-low body Series II constructed. The current California owner has owned the car since 1991, where it has remained under careful service and preservation, reflected in the 18,700 kilometers shown on the odometer.

Carefully maintained during current ownership, records back to 1998 show services with 13,700 kms including overhauling carburetors, replacing all coolant and fuel hoses, and performing a tune up as needed ($5,500). In 2012 with 17495 kms, the car was extensively serviced at a cost exceeding $24,000, including re-jetting the carburetors for optimum mid-range response, rebuilding the heater valve and improving the A/C performance, rebuilding front brake calipers, rebuilding the master cylinder and brake servo, and replacing all flexible brake lines. The clutch hydraulics were rebuilt (including a new clutch line, new master cylinder, and re-sleeved clutch cylinder), upper fuel lines replaced, new CV boots installed, and points ignition replaced with new Crane electronic trigger units and new coils. A Viton seal ring was also installed in the distributor. Oil and filter were changed and the car was tuned. In 2013, the car was serviced with 18,084 kms totaling over $5,000 tending to the A/C system with an R12 recharge (which still blows ice cold today), brake fluid flush, repair for brake light switch, and other various general maintenance items. In all, over $35,000 has been spent in recent years on this rare low body Countach S.

Today, this Countach LP 400S presents as a very handsome enjoyed example showing what appears to be largely original paint and original factory trim. The paint is very glossy throughout, but with some areas showing typical aging, including front valance road chips and lower rocker panel road speckling. Overall, the attractive driver quality presentation is glossy and quite vivid and gives an excellent visual impression, accented by very good black trim, clean largely unmarred glass, and clear lenses. The trademark scissor doors open and close smoothly and latch with confidence. The hood and trunk both open and shut with correctly and exhibit good fit. Panel gaps are good to very good in most areas with no obvious issues, reflecting original factory specifications. The trunk lid shows mounting holes for the correct rear wing, which has been removed but is included with the car. The beautifully finished and correct factory wheels have some minor marks around the rims, but present very nicely with good gloss, sitting on Pirelli P Zero tires. All four tires appear to have good tread remaining. The trunk houses a correct tool kit and tool roll and the front compartment shows what appears to be the original spare tire and correct factory rim. The overall exterior presentation is both highly orignial and appropriate for driving enjoyment especially considering the low body stance and appropriately evocative color.

The interior is reflective of the low kilometers, showing what are believed to be original components and finishes. The tan leather seating and door panels present with very good fit and finish, while the headliner and surrounding panels are all in very good condition with matching finishes. The top of the dashboard and the center console are both particularly well-preserved. The instruments are in very good condition with solid numbers and dark dial faces, matching overall with the quality of the interior and also believed original. The carpeting is tidy and clean throughout the interior. The trunk compartment displays factory carpeting with matching side panels all of which show some use, but again appear original.

Under the hood, the engine and engine compartment are complete, properly maintained and show largely unrestored engine bay finishes. Correct air cleaners, hoses, and proper fasteners are all in keeping with the thoughtful documented maintenance this car has seen over the past twenty years. The underside of the car is clean and dry, showing correct components all of which indicate a solid and unmodified car, consistent with the cosmetic condition overall.

The car starts easily and settles into a smooth but throaty idle. The exhaust note is aggressive and visceral in a way that serves as an extension of the car’s styling. The clutch and brakes operate as expected with the gearbox delivering smooth shifts in each gear, showing a hint of 2nd and 3rd gear synchro wear, but nothing to inhibit performance. Driving is simply exhilarating. Right foot planted even lighting on the throttle, delivers a swift push in your back as the car launches to highways speeds in a matter of seconds, coupled with the magical noise that only a carbureted V12 can deliver. There is a sense of drama and occasion no matter what the driver is doing, which makes every drive special. The car drives very confidently without smoke, cabin fumes, or throttle hesitation. Instruments show excellent oil pressure and correct running temperatures. Cornering is superb with great grip and no suspension clicking, which is often heard or felt in the steering wheel of these cars. It is nearly impossible to complete a ride without smiling, even if a bit devilishly so. This Countach comes with the rear wing, a set of tools and tool roll, spare bulb container, car cover, and spare belt. Previous records for service are also included.

The Countach has always delivered on the promise of remarkable performance and dramatic design. Confident high sped handling coupled with Bizzarrini’s masterpiece of a V12, there is little in the sports car world that can compete with the audacity of the Countach. Ready to be driven as originally intended with well-preserved and strikingly original cosmetics and performance capability, this second to last built, “low body” Countach is just one of only 105 built to deliver a commanding driving and ownership experience unlike any other performance car.