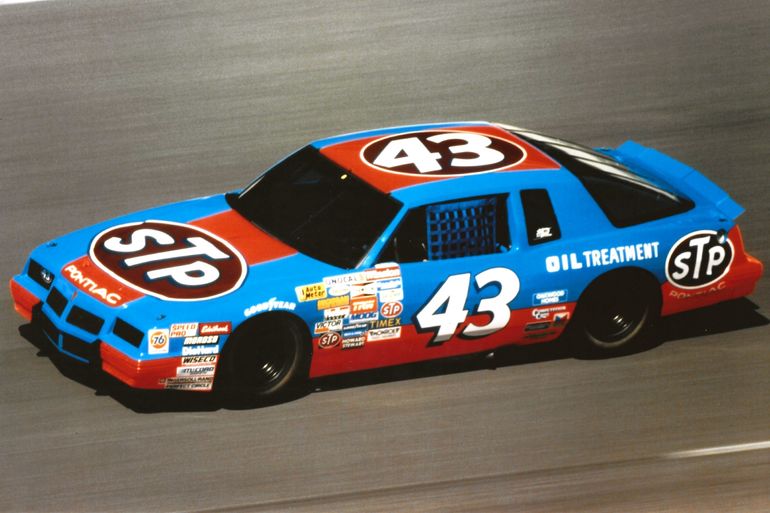 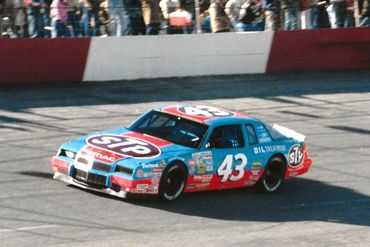 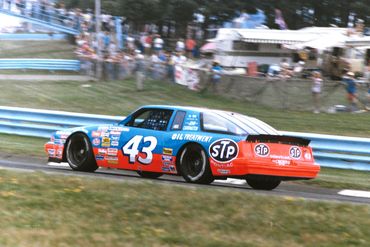 General History
“The King” Richard Petty is one of the most successful NASCAR drivers in history. The King is credited with seven championships and is widely regarded as one of the most important figures in the financial growth and popularity of NASCAR racing. There is a reason he’s earned the nickname “The King”. He literally invented much of the promotional licensing and sponsorship tie-ins that built the NASCAR juggernaut we know today. Petty was also a critical figure in advancing many technical features of modern racing still in use today. His legendary career spanning from 1958-1992 includes winning the Daytona 500 seven times and a winning single season record of 27 races (1967), ten of which were consecutively achieved. His records included nearly 1,200 starts, over 700 top ten finishes, and 123 pole positions. His legendary Petty Blue race cars ran through several various manufacturers including Pontiac who supplied cars through the 1980s and into his final racing season, 1992. As a key figure in racing, Petty also is regarded as one of the top earners in sponsorship, licensing, and promotion for his cars, despite never allowing alcohol sponsorships on his cars; a promise Petty kept to his mother throughout his racing career.

History and Ownership
This example is one of three Hutcherson-Pagan chassis built for the 1986-1987 racing season. All three were purchased by Richard Petty and used for that racing season. It is believed that each of these three chassis were set up to be short track, intermediate, and speedway cars. Although there are no stampings on the chassis, one of the most distinguishing features surrounding the history of this car is the original driver’s seat. This seat was custom formed by Kyle Petty specifically to allow Richard a more comfortable seating position. Richard had been experiencing progressively worsening back trouble, so the specially contoured seat was critical to his comfort while driving for long periods. The original Kyle Petty seat is unrestored and included with the car. Upon completion and race prep, Richard Petty piloted this car in multiple races, until it was damaged while racing in Atlanta in 1987. After the damage, the unrepaired car returned to Petty Enterprises where it remained, unrepaired at the shop. Eventually Petty Enterprises sold the car to the first private owner, a local HVAC shop mechanic who traded his services in exchange for the damaged car. The car was restored to a very high standard by Marc Davis who eventually sold the car to Jim Fergusson who used it primarily as a display car. While under restoration, the custom formed Kyle Petty seat was removed and preserved, and a new seat was installed. During this period, the car was used in various promotional events, some of which included appearances by Richard Petty, photos of which accompany the car. The car was then sold to Gene Felton who sold it to the current owner who prepared the car for vintage racing. Although racing records are difficult to corroborate due to a lack of chassis numbers, this car, the ownership history, and racing history have been verbally corroborated by prior owners as well as Richard Petty, himself having written a letter addressing the car and some of its history (a copy of which is included with this car). This car is believed to have participated in seven races in 1986 and an additional seven races in 1987 before the crash in Atlanta concluded participation for the season. Photos included with the car show it after the crash, in 1992 under restoration, and with Richard Petty as it was used for various display and promotional events.

The current owner, a Northern California multiple-car collector and vintage racing enthusiast, prepared the car for vintage racing and has enjoyed participation in a few races including Historic Stock Car weekends in CSRG, HMSA, and SCCA vintage race events. Racing engine expert Tony Oddo built the motor currently installed in the car, which is believed to have approximately 3 hours of run time. Engine build notes indicate several details and specs and are also accompanied by the dyno sheet indicating over 660hp and 500lb ft. at 7000 rpm.

Having benefited from professional race preparation and minimally used by the current owner, this Petty STP Pontiac presents today with excellent finishes far better than most seen on vintage NASCAR examples. The paint is glossy, accurate, and all sponsorship logos are clean and correctly representative of the 1987 racing season. Finishes are very well resolved including the hood fit, window edge trim, rear window fit, and exterior body details, all of which are accurate and beautifully finished. The restoration has been very well preserved with much of the finish work performed at a level that far exceeds typical NASCAR body construction. Everything from the long hood to the aeroback rear window has been accurately presented in this iconic Pontiac.

Under the hood, the 357 cu. in engine sits with plenty of easy access to all systems under the lightweight hinged hood. The engine is very well prepared including the excellent mechanical preparation from Tony Oddo. The components are properly fitted and plumbed with bundled and braided stainless lines mounted with aeroquip fittings. Bilstein shocks, high volume radiator with auxiliary fan, correct roll cage engine structure, and a rear breather air cleaner pan concealing the carburetor complete the correct NASCAR features underneath the template body lines. The car is outfitted with a rear mounted fuel tank which can be filled when opening the hinged trunk. The underside of the car reveals both excellent construction and restoration with top-of-the-line racing components, welded dual exhaust, GoodYear Eagle racing tires, and competition suspension.

This Petty STP Pontiac is accompanied by the original Kyle Petty fabricated custom seat, a car cover and bag, a box of Richard Petty playing cards, various articles supporting the history of Richard Petty, copies of restoration photos documenting the car, and Tony Oddo specs and dyno sheet for the engine currently in the car.

This car is sold on Bill of Sale only.