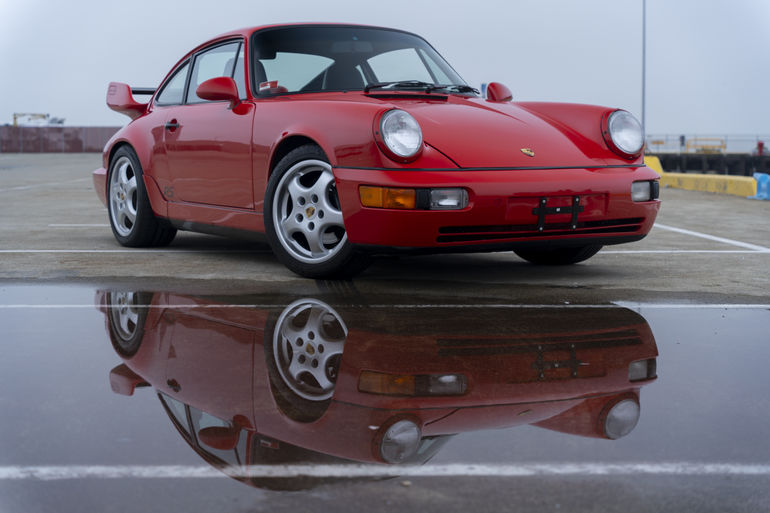 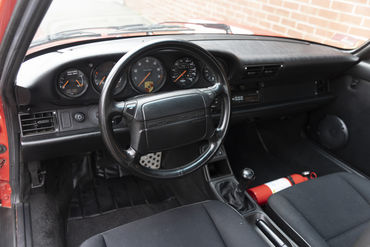 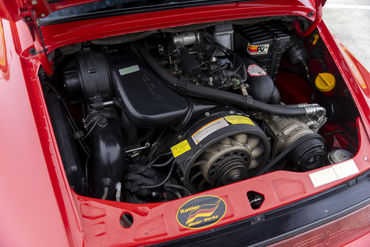 One of 701 Renn Sport series constructed for North American Markets in 1993/94
Tasteful upgrades to engine, suspension, and body

Although the 993 signaled the departure of the mighty air-cooled engine that had served Porsche since the very first car produced, the sendoff included a fantastic, limited edition 911 - the RS America. Inspired by the legendary 1973 Carrera RS, the RS America was a bold, purist statement specifically built to honor decades of racing success and the growing interest in club racing. Built with a focus on weight reduction, the RS America was pared down by removing the rear seat, door armrests, and sound insulation. Interior door handles were replaced by door loop pulls, door pockets were deleted, and power steering, stereo, air conditioning, power mirrors, and cruise control were also removed to save weight.

According to the factory window sticker, this RS America was delivered with three of the four available cost-added options: Electric Sliding Sunroof, Limited Slip Differential, and Air Conditioning with Full Climate Control. The car was delivered to Maitland, FL in September 1992. Service stamps in the owner’s manual indicate accumulated miles consistent with records that support the current miles shown today. The current owner purchased the car in 2002 with approximately 64,000 miles, continuing to add service entries into the owner’s manual. Copies of service records dating back to 1998 include regular oil and filter changes, A/C service, belt replacement, and brake fluid flushes. In 1999 with 52,446 miles, the engine and transmission were removed from the car and the heads rebuilt with new exhaust valves and valve guides. At this time the car was also upgraded with new slightly hotter camshafts. Other services include a new clutch hose and slave cylinder at 57,000 miles, new left and right sway bar links, and in 2005, a new set of Bilstein shocks were installed along with an H&H spring kit and four-wheel alignment. That same year, the air conditioning compressor was replaced, and the sunroof motor serviced. In February 2021, showing 92,658 miles, an oil and filter change was performed along with a brake fluid flush, and in November 2021 a new battery was installed.

Today, this Porsche RS presents in excellent cosmetic condition with much of the car still displaying its original factory Guards Red paint. A digital paint meter has been used to show the original finishes on various panels returning single digit numbers which are consistent with factory applied paint. In July 1998 the engine lid was damaged in a minor rear end incident and replaced with the current RS 3.6 branded bi-level spoiler. The body is in excellent condition with consistent door, trunk, and hood gaps, and very good fit along the front and rear bumpers. Though modestly trimmed, the lenses, clear glass, and RS America emblems are all in excellent condition. The original side glass retain the Securit and the Sigla mark is also on the windshield, indicating original factory glass. The Porsche Cup wheels currently wear Michelin Pilot Sport tires with plenty of tread remaining. Originally equipped with 7” front and 8” wheels, the original 8” rear wheels have been moved to the front position and a set of matching 9” wide rear wheels have been installed. The 7” wheels have been retained and are included with the car.

The original interior has been maintained and reflects the spartan weight-saving agenda Porsche resolved to deliver in the RS America. The black cloth covered sport seats are in very good condition with the driver’s seat side bolster, having been worn due to seat belt rubbing, has been professionally reupholstered with closely matching material. The door panels, including door sills and distinct RS door pulls are all in very nice condition. The carpeting, headliner, and sun visors reflect finishes consistent with a car that has been enjoyed but appreciatively preserved. The dashboard, steering wheel, clear contrasting instruments and center console are all in excellent condition. The interior surfaces are all uniformly settled, yet positively reflect a well-preserved car despite the passage of nearly 30 years.

The car starts easily and delivers a great exhaust note echoing the slightly hotter cams installed in 1999. The motor provides a wonderful induction roar when pressed into service delivering fantastic performance, even when compared against higher horsepower cars of later build. The RS America sport suspension offers unparalleled 911 character, while the Turbo spec’d disc brakes are backed by a firm pedal and remain easy to modulate when put to the test with successive applications. The chassis is composed, tight, and authentic, and shows no visual evidence of structural compromise when inspecting the underside. The chassis reveals finishes and condition consistent with the recorded miles accumulated by the current and previous owners.

This is an excellent opportunity to acquire a well-maintained and handsomely optioned Porsche RS America, featuring tasteful upgrades and performance enhancements. Representing a unique and limited-edition road car built to serve the passion of Porsche club racing enthusiasts, this Porsche RS America is ready for enjoyable touring, spirited driving, and local Porsche events honoring the last of the great air-cooled performance gems of the 20th century.

The owner’s manual, various ownership literature, and leather pouch, a copy of the factory window sticker, a tool roll with tools, two tire irons, a set of 7” Cup wheels and tires, black lug nuts, four original shock and coil spring units, a spare fan belt, and copies of service records dating back to 1998.

Please note that the emissions system for this car includes a performance exhaust without catalytic converters. Due to California emissions testing requirements this car is best suited to an out of state resident or a licensed California dealer. 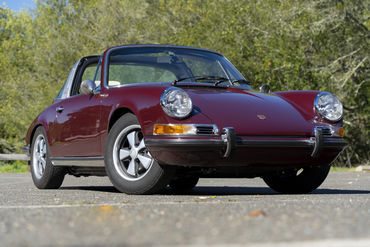 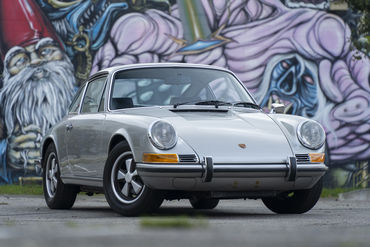