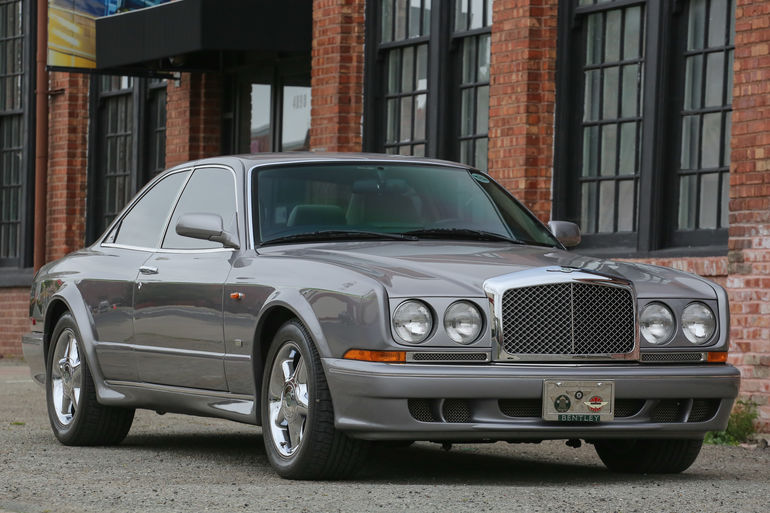 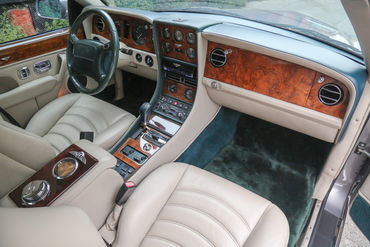 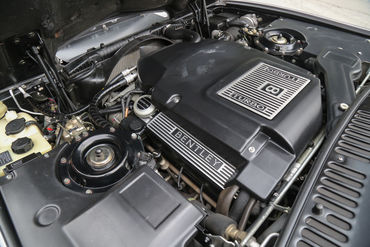 For over a century, Bentley Motorcars have become synonymous with the finest in luxury automobiles; blending elegance and superlative performance with coachbuilt bodywork and bespoke interiors. Long befitting royalty, Hollywood elite, and wealthy clientele, the Continental series remains among the finest of the modern Bentleys. And while each of the many classic Bentleys offer high quality motoring experiences, the modern Continental still stands proudly among contemporary offerings when compared against even the most prestigious modern cars of the day.

The Continental series was produced from 1991 – 2003 exclusively as a luxury coupe, in both T and R configurations. It was the first Bentley to not share exterior design with Rolls-Royce models, as had previously been the case since the mid 60s. While several iterations of the car evolved over the years, by the year 2000, Bentley offered the Continental R Mulliner, combining the power of the Continental T with the longer wheelbase of the wider and more luxuriant R. As part of that offering, the phenomenal 6.7 Liter turbocharged V8 engine delivered 420 hp and 650 lb. ft. of torque mated to a 4-speed automatic transmission. The performance was nothing short of remarkable, making the Continental R the fastest Bentley ever produced. 0-60 took a mere 5.6 seconds and top speed of 170 mph was smoothly achieved with 4-wheel independent suspension, 4-wheel disc brakes, and self-leveling hydraulic suspension with adaptive ride control.

During the final four years of production, Bentley offered customers a full range of options and features in a roomy two-door package, with a full-sized trunk, rocket-like performance, and plenty of room for rear passengers. Only 131 wide body Continental R Mulliner cars were built in this series configuration with a mere 7 built in 2000 with left hand drive. And while each of these truly unique cars offer so much, this particular example enjoys a particularly special history complete with supporting documentation, European and Stateside show car exposure, and consummate stewardship since new.

Originally commissioned and specially trimmed to be the Frankfurt Motor Show Car, this Bentley was exclusively constructed by Bentley to hearald audiences with the arrival of the new century. Featuring a list of special features throughout the exterior and interior, the car was built to Bentley specifications August 16, 1999 and debuted in Frankfurt. Always under the care of Bentley, it was then shipped to Los Angeles where it was unveiled to American clientele at Pebble Beach. The following is a partial list of some of the many special features installed at Bentley for this rare show car:

After the car was featured at these exclusive and premier events, Bentley then exhibited the car in Vancouver announcing the Canadian release, subsequently returning once again to New York for display in Manhattan. While under import from England and into the US, the car was detained at customs as the VIN had been identified with import restrictions. Paperwork accompanying the car identifies the matter which was conclusively resolved with the car returning to Bentley where it was designated for US import. During this time, the car remained consistently under the care of Bentley Motorcars until concluding its show duties upon which it sold to the first private owner.

Over the years, the car has been in the hands of careful owners who have maintained it as needed, accruing approximately 40,000 miles consistent with a recent Carfax and service records accompanying the car. In 2017 the center console and airbag were recovered with new material and the interior leather surfaces reconditioned. Also, in 2017 the front brakes were serviced including new brake caliper pistons and seals, brake accumulators, brake pads, the steering rack was rebuilt, rear suspension components replaced, and other mechanical parts replaced as needed. More recently (37-39,000 miles), the electric seat drive cables were replaced, the AC electronic board replaced, air pump belt replaced, 3k service performed, new battery installed, new left and right upper shock bushings replaced, and various electrical switches repaired.

Today this beautifully preserved Bentley remains in excellent driver’s condition, with just over 41,000 miles logged, still showing beautifully warm silver metallic paint with very high gloss over superb bodywork, and very nice panel gaps throughout. The body colored bumpers show excellent fit, the sculpted rocker panels, and emblems are all in very nice condition with excellent shine and no significant marks or flaws. The front of the car shows only minor evidence of road use while the remaining surfaces are in very good condition. The remaining trim, glass, lighting, and lenses are all in excellent condition as well. The car is outfitted with factory wheels which have been chrome plated under more recent ownership. A clear protective film has also been applied to the front of the car and the forward corners of the front fenders.

The interior shows exceptionally well with a combination of beautifully preserved and reconditioned original two-toned leather on the dashboard and single soft hue front and rear leather seats, and door panels. The two-tone theme continues with uniquely covered air vents, console insert and steering wheel, all of which are taut, supple, and handsomely presented. Some areas of use are evident in the driver’s seat left bolster and light fingernail marks on the steering wheel, but otherwise a very aesthetically striking interior. Of particular note are the matching deep green mouton sheepskin floor mats and original carpeting, accented against the performance-oriented drilled foot pedals. The dashboard and door-topped burled walnut finishes have a deep warm hue with vivid gloss to the clear coating. The dash and instrumentation are in excellent condition. The trunk compartment is in very nice condition with matching green carpeting, spare tire, a battery tender, and two spare umbrellas in case of inclement weather.

The engine bay and engine are mercifully preserved with attention to originality, proper factory components, and excellent detailing. Some concessions have been more recently made for service needs, but in most of those situations the car has been serviced with originality in mind. The undercarriage remains in very good condition, representative of the low miles currently shown on the odometer and consistent with a recent Carfax.

The driving experience is very refined and elegant. The presence of this Continental R cannot be overstated either when parked or gracefully underway. The controls are easy to use and inviting to the touch. The engine quietly purrs under normal use, but lets out a subtle roar under command, pulling strong with surprising power and excellent response. The automatic transmission shifts smoothly in all speeds, free of abrupt shifts or delays. The brakes operate effectively, bringing the car down from highway speeds smoothly and evenly, while the steering is generally light to the touch. When driving, one is surprised by the upright and commanding seating position, but it is all the more impressive even when driving with more spirited engagement. Even for the most hardened patrons of luxury, it is easy to see why these particular Bentleys command such attention. The car comes with the owner’s booklet set, a pair of matching umbrellas, a spare tire, battery tender, selected service and ownership documents, and documentation supporting the designation as the original Frankfurt show car including specifications for the features in the build.

This handsome one of a kind Frankfurt Auto Show Bentley is an excellent choice for the motorcar enthusiast eager to enjoy the driving experience of a one-off car with exemplary factory refinement – essentially a modern coachbuilt automobile at a fraction of the price when new. This beautiful and properly prepared Bentley Continental R represents an excellent opportunity for an enthusiast seeking to lavish themselves, friends, family members and other fortunate passengers in the confidence and prestige associated with finest in elegant motoring.