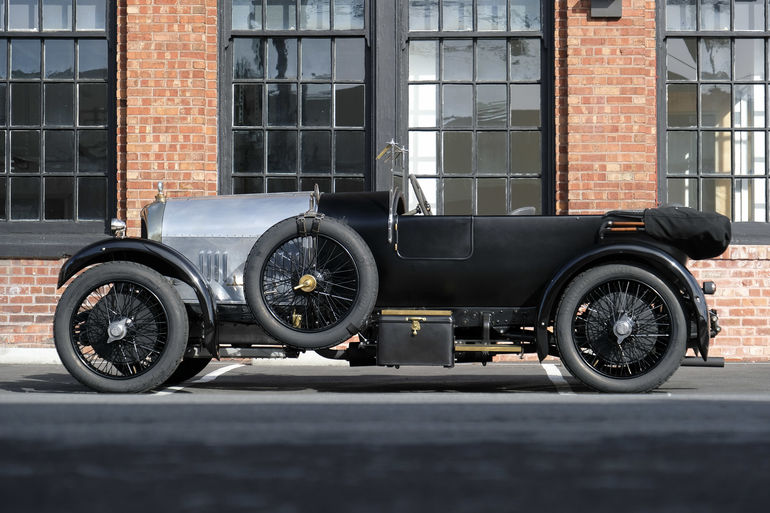 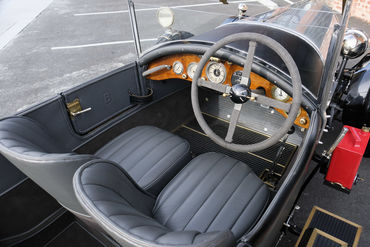 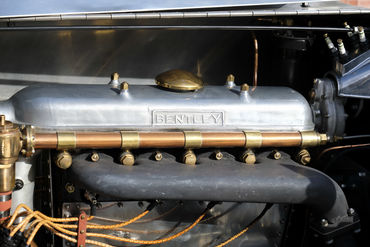 With more than a century of exceptional motorcar construction, world class competition development, and unprecedented engineering, Bentley Motorcars has continuously set peerless motoring standards for performance and luxury. Crafted by the finest artisans and bodied by legendary carriage houses of the highest order, every decade since their 1919 inception has offered new models featuring innovative design and engineering that competing automakers could only modestly emulate. Though the early years were challenging for an independent automobile manufacturer, Bentley pressed on, determined to establish their brand of excellence, confirmed by their fierce dedication as early examples emerged from their humble Baker Street, London garage, one by one, validating their indomitable prowess.

Offered as a critical feature of the first W.O. Bentley chassis, the new 3 Liter engine would go on to become highly regarded in competition circles including their achievement at the 1922 Isle of Man Tourist Trophy where Bentleys captured 2nd, 4th, and 5th place along with the Team Prize, and in 1924 winning the 24 Hours of Le Mans. A series of wins would decorate multiple works and privateer cars throughout the decade, all powered by the heart of these fine machines, the advanced 3 Liter twin-plug engine. The 3 Liter was a marvel of engineering brilliance. The first of its kind offered in a production car, the 2,996 cc four-cylinder engine featured a single overhead cam four valve head with a hemispherical chamber design, cast as a monobloc unit. The design was both robust and reliable delivering fantastic torque while delivering speeds of 100 mph through the four-speed gearbox. With competition successes also came an interest in personal conveyance from wealthy clientele. As was customary for the times, Bentley would assemble and deliver a complete running chassis to selected coachbuilders who would then hand craft the body, hood, and fender designs commissioned by the owner. The cost of such fine quality and handwork was certainly substantial but it made literally every Bentley not only uniquely constructed, but always of the highest quality in material, features, and finish.

With the vast history and unbelievable level of superlative automobiles offered over the past century, it is an honor to present chassis 103, considered to be among the oldest surviving Bentleys in existence. Recognized unanimously by prominent Bentley authorities and accompanied by a copiously detailed 30-page historic overview by renowned Bentley expert Clare Hay (condensed here in an historic overview) chassis 103 is without doubt among the earliest documented expression of the purity and elegance of the original W.O. Bentley 3.0 Liter.

Corroborated expert research indicates that chassis no. 103 was delivered on or around August 4, 1922, originally fitted with four-place Vanden Plas coachwork similar to the body on the car today. The coachwork is noted in the service record as “4 seater touring model Vanden Plas” with the body record no. 3194 built on chassis 103. Clare Hay then further suggests that chassis 103 was used internally by Bentley as a factory demonstrator and then subsequently sold.

1922 Bentley factory records, having been only later hand scribed in a leather-bound ledger, had not been so dutifully recorded upon inception. Thus, while early records are recorded sometime after construction, the expert consensus concludes that the original purchasing owner is believed to have been Major Robinson of Borden Hants, bearing the assigned Hampshire registration number HO 9620, which the car continues to wear today. By 1923, when factory records became more earnest, a ledger notation of June 1923 identifies chassis 103 with service data. Service entries for the car become evident in 1923 with notations for an updated, stronger A-Type close-ratio gearbox no. 156, (still fitted to the car today), and a later 1924 return visit to Works Service for fitment of newly developed four-wheel brakes and stage 2 Perrot shafts. In 1926, transfer of ownership is executed to Jack Withers, a prominent London based purveyor of Bentley cars. As the second owner, Withers returned for additional services including decarbonizing, block boring to 80.5, and fitment of BHB high-compression pistons. The Hay documentation continues identifying numerous details of the numbered components, the origin of those components, and fitment to chassis 103. Of particular note is the still evident and impossibly rare early geared-up Smiths type D4 dynamo driven from the rear of the camshaft.

The next owner is believed to have been J.B. Cooper of Cambridge, followed by a recording gap until August 1930 when a set of main bearings was supplied and a new owner, N. Johnson, London assigned in 1931. Johnson’s short-lived ownership yields to J.B. Butcher, Poplar, east London whereby additional recorded mechanical work is documented to 1938. At some point in the history of the car (believed to be before the war), the original body was removed and Vanden Plas 1923 body no. 1261, formerly of chassis PH1463, was fitted to chassis 103. By all accounts it is believed that the original interior remained with the chassis with only material color changing over time. In 1939/40 Rolls Royce struggles during the dawn of WWII and closes the Bentley Motors Service Department. Records after this period become based on ownership transfer, family recollections, and validation of former registrations from local township archives. After the war, chassis 103 is purchased by Mr. Chapman. The senior Chapman’s son, P.S. Chapman, recounts his father’s post war return from India, whereby he purchases the car but only a year later has sold it to a gentleman who resolves to simply store it in his garage. By 1961 the son is able to repurchase the car, though ownership is brief, selling the car upon his marriage to a “wealthy young man from the Slough area”. The next owner is known to have been Christina Smith, identified by the voided card recorded in the Kithead Trust Archives 1963. By 1965, chassis 103 journeys across the Atlantic finding ownership with H.R. Crown of Van Nuys, CA, John E. Mikchik of Glendale, CA 1968, and Dr. Keith Gerard, Long Beach, CA, 1971 with well-known and regular exposure in Bentley Drivers Club events and gatherings throughout the 1970s and 1980s.

In 2018, the current and consigning owner purchased chassis 103 to from Jack Hilton of Carmel, CA, whom, according to the current owner, had Bentley restoration expert John Hunt embark on a sensitive recommissioning of all major mechanical components under his ownership, intent on returning the car to the most authentic period representation possible, consistent with the documentation that had been revealed on this rare early car. The cosmetics were tended to with equal sensitivity preparing the scratched alloy and black varnish exterior finish consistent with reports of the original factory designation. The gloss back fender work, chassis, and painted wire wheels complete the brilliant celebration of mechanical artistry accented by the polished German silver radiator shell and various glints of exquisite period correct jewelry.

Today this remarkable Bentley must be counted as one of the most important and impressive 3 Liter cars in existence today. Given the authoritative and detailed Clare Hay report, the most discerning collector can certainly be confident not only of the provenance but further of the care and attention that the current and previous owners have lavished upon this car, not just in securing the originality but in preserving the oldest known Bentley to such exceptional results. The unique Vanden Plas body, delivers a commanding presence in every respect. The body is finished with contrasting satin black and raw alloy treatments in keeping with the spirit of these highly refined steeds. The spectacular mechanical components, each with their own artistic presentation, all display a calming visual harmony. The paint presents with just the right level of finish reflecting period correct varnishing while the crisp and glossy fenders build a fine contrast against the bodywork. A majestic profile consistent with royal proportions and carriage-like elegance conveys the effect that the body is hovering above the painted wire wheels. The stately open Vanden Plas coachwork is every bit as resplendent as it was when first fitted to the car.

Under the centrally hinged alloy hood the legendary 3 Liter engine and firewall exhibit a Jules Verne-like machined quality with authentic feel to all components, warmly hued by rewarding service in each cycle of the dutiful original engine. The exquisite range of toned metal, copper and brass finishes, polished, painted, and preserved accessories reflect the integrity of the original components, sensitively restored while preserving the original brilliance of this magnificent artifact of Bentley history. The various mechanical components are a feast of detail and casting brilliance, many of which retain their factory numbers chronicled in the detailed Clare Hay report. Every piece of magnificently cast hardware has been hand crafted and superbly engineered, reflecting the splendor of this exceptional 3 Liter engine and the cadre of specialists that have honorably sustained this celebrated Bentley to such a rewarding level.

The interior continues the celebration of crafted brilliance displaying a wonderful array of correct instruments nested in the wooden dashboard. Each one of these unique pieces tells a story of precision and pride, having carefully charted the measure of this fine machine through miles and miles of stoic journeys. The recently completed grey leather interior is a wonderfully subdued color selection as it allows the delicate touches of brass, wood, and the commanding fabric wound steering wheel to convey a satisfying harmony to the stately interior. Here again the beauty lies in the remarkable combination of history and thoughtful restoration artistry, exquisitely embodied in the highest quality materials, yet so tastefully performed without the need for anachronistic embellishments outside the character of the original. Of further note are the various delightful details throughout the car including dual side mounts, leather covered running board storage, stunning polished headlamps, and beautifully exposed mechanical features including the updated Bentley Works installed four-wheel brakes. The underside of the car is equally rewarding as visual delights continue including wrapped and laced leaf springs, beautiful alloy castings, exposed hardware, and a mesmerizing symphony of actuating levers and armatures that would delight anyone with even a modest interest in the mechanical magic of such an early era automobile. The car is accompanied by a period correct bottle jack and a copy of the Clare Hay report.

With more than 100 years of exceptional motoring, remarkable automotive achievements, and unprecedented luxury, this exceptional 3 Liter Bentley represents an extraordinary opportunity for a collector/enthusiast to acquire one of the most important and earliest known Bentleys in existence. With known history, Clare Hay documentation, superlative restoration, and the mechanical confidence of ongoing and proper care, this truly is a one-of-a-kind automobile. For anyone who has desired an elegant prewar coachbuilt automobile displaying uncompromising quality and exceptional history, this 3 Liter Bentley will in every respect masterfully offer its humble service with grace, poise, and dignity, most assuredly for another century. 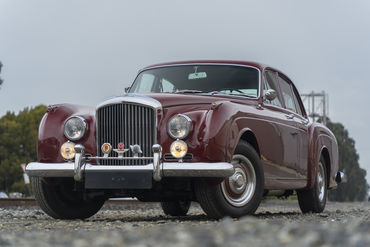