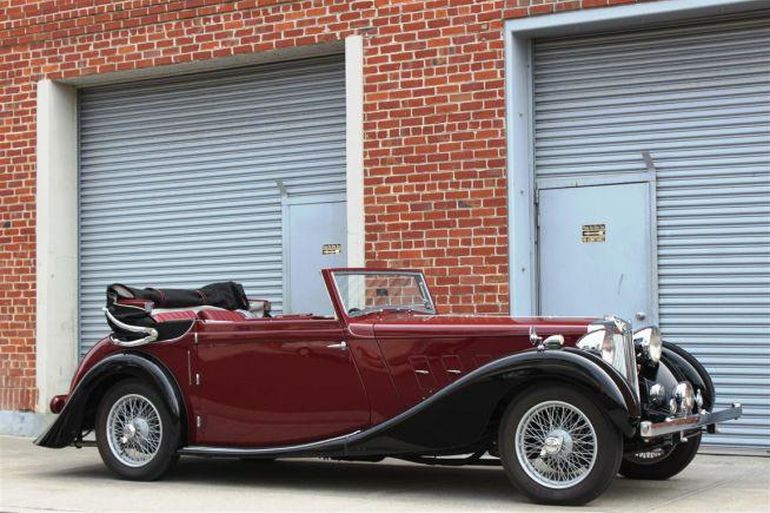 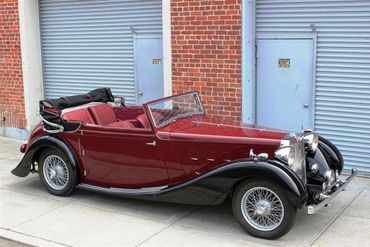 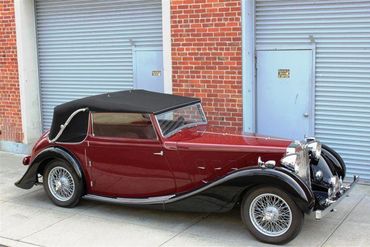 Although MG is famous for its small sports cars, the company also produced larger cars. From 1936 to 1939, they produced the handsome SA, which was elegantly styled and powered by a dual carbureted 6-cylinder engine. The specification also included hydraulically actuated brakes and syncromesh on upper gears, a technologically advanced specification for the late 30s. Initially available as a saloon only, an attractive three-position Tickford drophead bodied by Salmons & Sons became available for 1937, and 696 examples were built. Only 50 examples are known to exist, with perhaps 10 in the United States, making it unlikely to encounter another passing the opposite direction.

This particular car was imported to the United States in 1971 and eventually fell into disuse. It was purchased out of a barn in 1988 by a pair of owners, one of whom was Phil Frank, a well-known cartoonist responsible for the comic strip Farley, as well as several strips that appeared in Road & Track, including Nigel Shiftright and Frank and Troise. After acquiring the car, they embarked on an exhaustive 12-year restoration, which included every aspect of the car. The body was removed from the chassis and all weak wood in the bodywork was replaced with correct ash. The substructure was selectively strengthened, and all mechanical systems rebuilt as well. The engine was completely rebuilt, as were the suspensions and brakes. The interior, top, paint, and chrome were also renewed. The work was done to high standards, as evidenced by the car’s show successes, which included 1st in class at the Palo Alto Concours in 2004 1st in division at the Half Moon Bay Classics by the Sea Concours, several 1st places at the Jack London Square Annual MG Meet, and 3rd place at the 2004 Silverado Concours.

Since the restoration, the car has seen minimal use, but has been maintained to ensure it is in proper running order. In 2012, the brake system received considerable attention, including rebuilt wheel cylinders, rebuilt master cylinder, turned drums, and relined shoes. The car runs and operates well and is ready to enjoy at this time.

Cosmetically, the car remains fresh, with minimal wear and aging since the restoration. The paintwork was done to the high standards necessary to compete in concours and is holding up well with a few small chips and one stress crack near the trunk opening. The bodywork is sound and the panels very straight. The chrome is in very good shape, with light pitting and light scratching only. The painted wheels are in fine shape and all badging and trim in excellent shape. All glazing is in good shape, including the Lucas headlamps with MG medallions.

The interior is also in very fine shape, with only the slightest of wear to the leather. There is a bit of wear on the driver’s seat from ingress/egress, as well as one scratch in the passenger’s seat bottom. The carpets are excellent, as is the wood trim on the door panels and dashboard. The wood access cover for the soft top has a crack in it. The instruments and switches are excellent throughout. The top is like new and shows excellent workmanship, with burgundy leather welting to match the interior upholstery.

This is an extremely rare opportunity to acquire an elegant open big MG that was restored to the highest standards. The car is ready to enjoy and is a rarely seen model, so it is sure to impress even the most seasoned MG and British car enthusiasts.