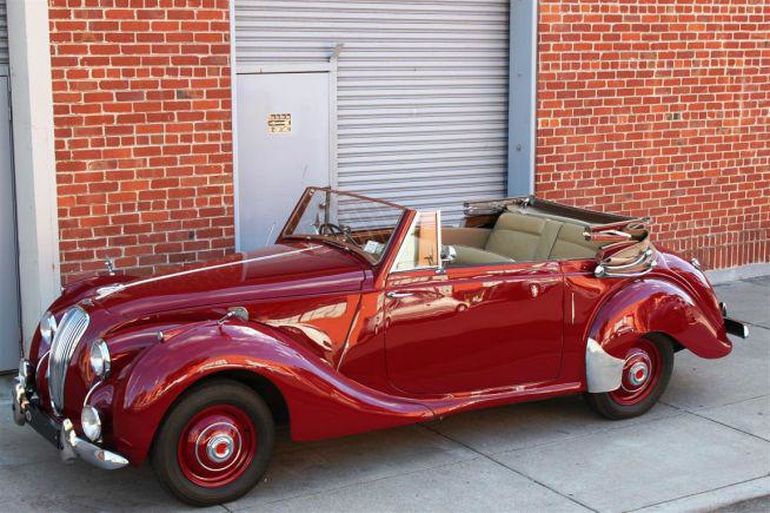 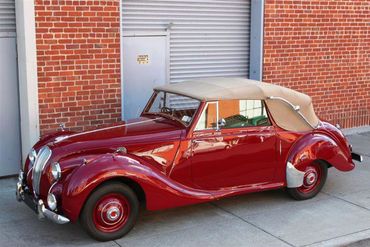 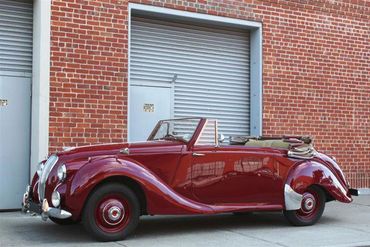 A Fascinating and Sophisticated Drophead with Independent Suspension and Twin Cam Engine Shared with the DB2. Extremely Rare Car

The 2.6 Litre was Lagonda’s first postwar model, and was a technically sophisticated clean sheet design that owed its existence to some of the best and brightest names in British motoring: Frank Feeley, Walter Owen Bentley, and David Brown. The exterior coachwork was designed by Frank Feeley, who also designed the Aston Martin DB2, while the mechanical components, particularly the lovely twin-cam inline-6, were designed by W.O. Bentley, and David Brown provided additional technical refinements and the backing to put the car in production.

The heart of the car and its story is famously W.O. Bentley’s 2.6 liter dual overhead cam inline-6 that also powered the DB2. W.O. Bentley had joined Lagonda in 1935, after his three year obligation to Rolls-Royce was met following their absorption of Bentley Motors Ltd. in late 1931. In the 1930s, he was Lagonda’s chief designer and was responsible for their sophisticated V12 engine and several other sophisticated cars during the interwar years. After World War II, he designed the 2.6 liter twin cam inline-6 for the Lagonda 2.6 Litre, and it is reportedly this engine specifically that motivated David Brown to purchase Lagonda in 1947 since he had purchased Aston Martin earlier that year and was still utilizing the pushrod actuated inline-4 that Aston had on hand. Ultimately, the 2.6 Litre became W.O. Bentley’s last car design.

When Brown bought Lagonda in 1947, they were already working on the 2.6 Litre, which, in addition to Bentley’s inline-6, had a host of other sophisticated features. This included independent suspension all round (including coil springs and dual wishbones at the front), inboard rear brakes, and X braced chassis. While prototypes had a Cotal pre-selector gearbox, David Brown supplanted this with the “David Brown” synchronized 4-speed gearbox, also shared with the DB2. The cars were available in open, closed, and saloon forms, and were sophisticated, luxurious, and expensive. Just 550 examples of all body styles were built in all, of which perhaps 50 were dropheads.

This particular car was restored from the ground up some years ago by its previous owner, who was an aerospace engineer and professor at Cornell by the name of John L. Lumley. Lumley purchased the car in Scotland needing restoration from a fellow who owned another 2.6 Litre Drophead and brought the car back to the United States where he embarked on a thorough restoration. He discusses the restoration at length in his book, “Still Life with Cars: An Automotive Memoir”, and devotes an entire chapter to this particular car. There are also photos of the car from 1970, when it was seen parked on the street in 1978. While in the UK, the car wore registration number GKW 769.

Today, it remains in sound overall condition and is a nice driving example that presents well overall but has some patina. The paintwork was done to high standards and is glossy, but shows some checking in places and the occasional chip or scratch. The body is straight and solid with good panel fit and operation. The chrome is very good, with minimal pitting and only light surface scratches. The lights and glass are very good throughout, with no major signs of wear or deterioration. The car is equipped with Lucas fog lamps. The top is high quality canvas and is in very good condition.

The interior is in good overall condition. The leather has been redyed and is in good shape, with some creasing and minor cracking in evidence. Lumley comments on the impressive condition of the upholstery when he purchased the car, and it is likely that he opted to keep what may be the original upholstery when he restored the car. The wood dashboard is in great shape, as are the various switches and instruments. The carpet is high quality wool and in very good condition.

The engine compartment has been beautifully restored and is nicely detailed and quite clean. The valve covers are polished and the various accessories have been attractively refinished in semi-gloss black. The glass washer fluid reservoir is in place, as is the factory air cleaner and heater system trunking. The trunk has a rubber mat in place which is in excellent order and the jack and a tool roll are in place.

The car runs and drives well, with a great exhaust note and properly tuned engine. The controls are positive throughout, with a substantial and confidence inspiring solidity for all inputs. The gearbox is a pleasure to use with good synchromesh. The brakes are effective although they pull the car to the left somewhat. The steering is tight and it is easy to place the car accurately.

This is an extremely rare opportunity to acquire a sophisticated and rare car that embodies a fascinating point in British motoring history. The result of a collaboration of some of the great engineers and industrialists of the time, the car has a sophisticated driveline and chassis which makes it feel more modern than its build date would suggest. This particular example has been well-restored and is a pleasure to use. 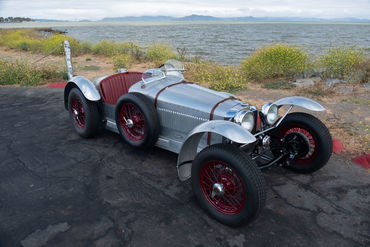