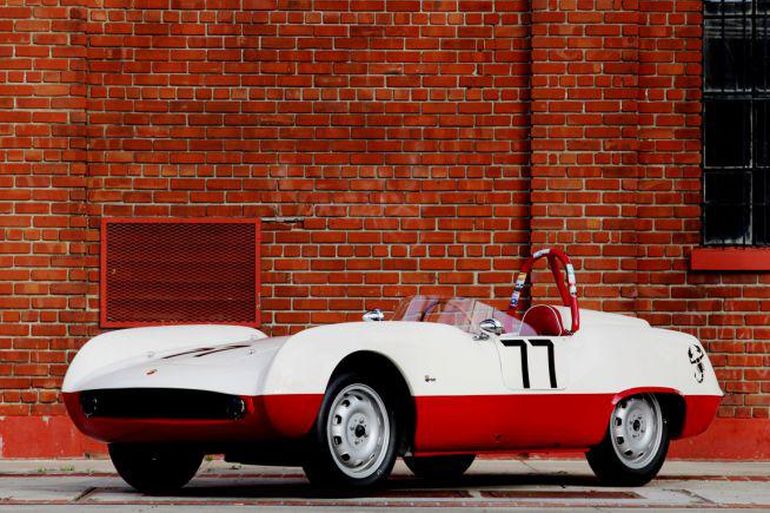 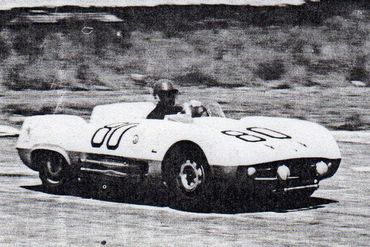 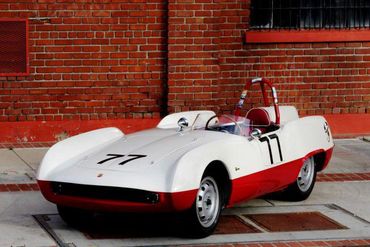 Carlo Abarth: energetic and adventurous, five-time European motorcycle racing champion, a key participant in Cisitalia, and founder of Abarth, his legacy remains as one of the most innovative independent sports car designers of the post war era. In the 1950’s, “Abarth & Co.” was celebrated for their hand-built, coachbuilt cars, passionately prepared and displayed as a means of promoting their line of performance accessories. Italian car manufacturers Alfa Romeo, Fiat and Lancia, along with Ferrari, Maserati, even Porsche frequently added Abarth equipment to improve performance and bolster exclusivity.
The earliest “Abarth” cars (1949) continued to bear the Cisitalia badge with “Squadra Abarth” markings on the sides of the body. However, by 1950, the totally new 205 chassis arrived, ushering in the Abarth lineage. Two cars were initially delivered, with two more to follow as interest grew. The first finished car appeared March 1950 at the Giro di Sicilia, followed by the second shortly thereafter. In April 1950, both cars raced in the Mille Miglia with the first car featuring distinctive aerodynamic modifications along with additional lightweight body panels.

Building ambitiously on this success, the Abarth 207/A came to fruition when US based Italian-car importer, Tony Pompeo perceived demand for a 1000cc sports-racing car. In 1954, shortly after discussions with Abarth, Pompeo inspired John Bentley to place an order for the first Abarth 207/A off the line, becoming the first car built by Abarth in series. The 207/A utilized the Fiat 1100/103 driveline, with performance enhancements, while the chassis was largely hand fabricated using a sheet-steel platform similar to previous Abarth models. This new chassis would be significant enough on it’s own performance merits, but for the fact that one critical feature remained; the body design. For this, Giovanni Michelotti was called upon to sculpt what would ultimately become one of the most distinctive and memorable bodies ever crafted. Michelotti was, by this time, well known for being a risk-taker in his design work. Using intuitive aerodynamic ideas, Michelotti created an asymmetrical body design that departed radically from the soft, and often plump forms, typical of this period. Instead the 207 featured edgy aerodynamic lines on a low and lean body, leveraging the new chassis, while exposing remarkable mechanical design sophistication truly ahead of the times. The low frontal cross section, peaked fenders, minimal windscreen, and partially covered rear wheels were all radical but beautifully executed ideas.

The 207 was fabricated by hand at the newly formed Boano Coachbuilders, stunning onlookers and automotive press, resulting in several inquiries to Abarth for orders. In all, a dozen cars were completed, all of which were hand made, each containing variations based on customer order. Although the stunning body design and capable mechanicals proved robust, and the chassis delivered competitive results, times were changing. Small-displacement racing was evolving and these charming “dual-purpose” Italian racing sports cars struggled to compete against purpose-built racecars from other countries. What would prove to be a challenging time for racing, resulted in unexpected rarity witnessed today by the few proper remaining 207 series survivors.

This example is the first car sold (chassis N. 001). It arrived in the USA “just in time” for owner John Bentley and co-driver Jim McGee to allow minimal preparation for the 1955 Sebring 12-hour race. The car competed valiantly but eventually was withdrawn part way through the race. The balance of the 1955 season resulted in selected podium class finishes at Thompson and Watkins Glen, as well as a new speed record at Daytona Beach. John Bentley, and subsequent owners, Max Goldman, Karl Brigandi, and Carmella Martin, campaigned the car in period racing events in the Midwest, and by 1957, in California.
By 1986 001 was active again, this time in vintage competition, owned by George Simmons and later Courtney Whitlock. Jim Proffitt restored the car for Whitlock before attending several North American premier vintage racing and concours events through 2004 as well as multiple appearances in Northern California’s Concourses through 2010.

Today this Abarth presents a unique opportunity for an enthusiast to acquire a very well-sorted, properly prepared car that is eligible for numerous events and top-level shows such as Pebble Beach, Villa d’Este, and Chantilly Arts & Elegance, among others. Unlike significantly higher priced and well-known or previously exhibited cars, this Abarth 207/A delivers an adventurous, open, coachbuilt experience with stunning body design and thoroughly novel construction. Truly there are few cars that can offer this much excitement and potential to participate in a wide range of shows and events at an attractive entry price.

Currently, Abarth 207/A 001 is properly restored and mechanically well-prepared, displaying very good racing cosmetics inside and out. While several important safety features have been made in compliance with current historic racing requirements, the car retains much of its original, almost impossible to replace equipment such as the twin, single throat Weber 36 DO4 carburetors, Nardi flat wood wheel, and hood hold downs, unique to these cars. Over the past three years, experts at Epifani Restorations have rebuilt all of the mechanical components of the car with attention to steering, suspension, brakes, engine, and gearbox. The file accompanying the car includes detailed receipts totaling in excess of $100k for work done by Epifani restoring and refining this car. In the past year, there has been continued attention to detail, track testing, and refinements made in order to achieve the performance metrics commensurate with a car of this provenance.

The cosmetic presentation is very handsome overall with the two-tone paint exhibiting very nice, uniform gloss, and smooth bodywork. The openings fit nicely including door, passenger aero panel, trunk, and hood, which retain their proper factory fasteners. The emblems and lighting are all in very good condition.

The interior of the car features very nice correct instrumentation and proper (very rare) original flat wood Nardi steering wheel. The drivers seat is nicely padded with a properly anchored safety harness and roll over bar. The overall interior is nicely presented with the formerly restored finishes now handsomely exhibiting evidence of joyful use. Wheels are nicely finished with proper paint and tires appropriately sized for confident driving.
The car starts easily and runs and drives smoothly, making good power and shifting quite easily through all gears. The mechanical components are in excellent condition at this time, having been recently and comprehensively restored by Epifani Restorations. Under the hood one immediately appreciates the attention to detail throughout the presentation. Epifani rebuilt the engine, transmission, brakes, and differential utilizing correct components and proper finishes in keeping with his reputation for excellence with Italian cars.

All critical suspension components have been rebuilt and magnafulxed for added safety and durability. Using several rounds of testing and refinement of geometry, Epifani carefully “re-bumpsteered” the steering to improve the handling characteristics and enhance safety at the track. A complete set of 15” wheels have been specifically made for improved road and track use and are currently mounted. The car comes with the original fuel tank, the original 14” wheels, and copies of period reference literature including documents from Pompeo carefully (and copiously) outlining the specifications, performance settings, gearbox ratios, dimensions, and equipment originally intended for the car.

Ideal for many premier concours throughout the world and road rally events, this Abarth 207/A is not only an interesting piece of Italian automotive racing history, but also a delightful dual-purpose show and go experience for motorsports enthusiasts. Included with the car are many interesting historical documents relating to Abarth 207s, as well as documents specific to s/n 001, including an original California title. 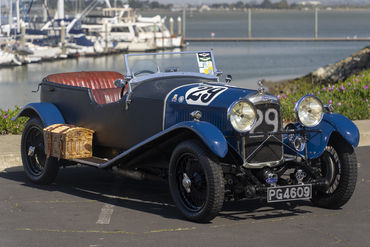