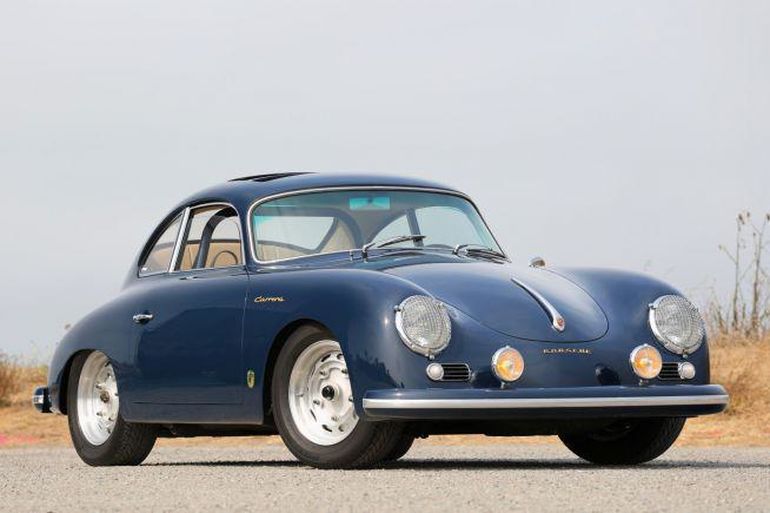 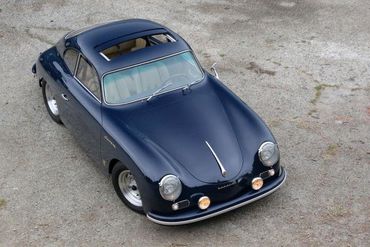 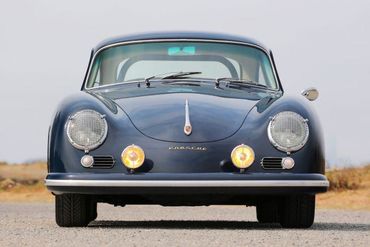 In Porsche’s continuing quest to become a world-class sports car manufacturer during the 1950s, they developed their first bespoke engine. While Porsches up until that point employed a Volkswagen derived single cam pushrod engine which was extensively developed and surprisingly potent, the engine’s intrinsic design presented limits to volumetric efficiency and thus the legendary Ernst Fuhrmann-designed Type 547 motor was born. Using four overhead cams, roller bearings for the crank, and bevel drive for the valvetrain, the motor was a masterpiece of technology and permitted exceptional specific output, nearly 100hp per liter in some cases, all with 1950s technology. These now legendary racing engines powered all manner of significant Porsche race cars: the 550 Spyder, 718 RSK, RS60 and RS61, the 787 Formula 2 car, Abarth GTL, and the 904.

For the truly competition oriented (and well-heeled) road car customer, Porsche also offered these 4-cam engines in 356 road cars under the Carrera name, which was derived from Porsche’s exceptional success at the Carrera Panamericana race in Mexico, especially in 1954 where a 550 Spyder dominated the 1500cc class. The complexity and race-bred nature of these engines meant they were not for everyone; about 2000 Fuhrmann 4-cam engines were built in all, with very few making it into road cars. The legendary mystique that surrounds this engine has made genuine 356 Carreras some of the most desirable Porsche road cars of all time.

This 1956 Porsche 356A Carrera 1500 GS Reutter coupe left the factory on February 11, 1956 and was discovered 14 years ago in an Oregon garage, less an engine. A restoration was undertaken, which included a repaint in blue and a number of modifications focused on performance and drivability. The restoration was completed in 2006. A 2.0-liter Fuhrmann 4-cam engine from a Carrera 2 was sourced and painstakingly rebuilt by Alan Klingen at The Stable in San Francisco, California. Carillo connecting rods were fitted, and many parts supplied by The 904 Store, which specializes in these four-cam Carrera motors. Extensive invoices are included for this work, as is a dyno sheet showing a power output of 175hp. The custom Type 741 4-speed manual gearbox was built with strengthened internals and a limited-slip differential from Vic Skirmants. The car is also equipped with a sunroof, an 80-liter fuel tank, and a GT-style roll bar. Aluminum-frame reproduction Speedster seats have been added along with wider alloy wheels, Marchal fog lamps, and a louvered aluminum deck lid. Since the work was completed, the car has been driven sparingly and went on to receive top honors in the Special Interest Class at five 356 Club events. This 356 Carrera is now being offered with records from the restoration, a Porsche Certificate of Authenticity, and a clear California title in the seller’s name.

Originally finished in Lago Green Metallic (5605), the car was repainted in a custom dark blue during the restoration. Upon disassembly, evidence of prior race and rally history was discovered in the form of period relays and wiring fitted under the dash for timing equipment and lighting for map reading. There was also evidence of damage to the rear clip from an accident early in the car’s life. The body was brought down to bare metal, the accident damage was professionally repaired, and paint from Spies Hecker was applied.

HID bulbs have been added to the Marchal 7″ headlamps, which are installed behind clear Hella lenses. A set of bumper-mounted amber fogs, also from Marchal, have been fitted. The floor pans, longitudinals, closing panels, and battery box are believed to be original factory sheet metal.

Boyd Coddington manufactured the 15×5.5″ aluminum wheels, which wear a set of Bridgestone Potenzas. Weight reduction for this GS includes the use of Plexiglas side and rear windows, as well as lightweight bumpers wit h GT style trim without rubber strips and an aluminum deck lid. A set of Sigla glass side windows and regulators is included with the sale. The care makes a strong cosmetic impression with high quality paint applied over an excellent body. The paint displays some light wear from road use as well as very light aging, but remains very attractive. The chrome has some light pitting and weather stripping around the windscreens shows aging. The remaining glazing is excellent, including the evocative yellow Marchal fog lamps.

The cabin has been fitted with a pair of aluminum-frame Speedster seats trimmed in tan leather with blue piping. Pull-strap windows and a GT-style roll bar have also been added, and the matching leather back seat and interior sunroof panel are included with the sale, though they are not currently installed. The window pull straps and rear luggage compartment straps are done in contrasting blue leather to match the piping. The leather has light mellowing and remains excellent, while high quality and correct floor coverings, done in square weave carpet with rubber center sections, are also excellent. VDO instrumentation includes an 8,000 rpm tachometer and 160 mph speedometer. A wood-rimmed VDM steering wheel with engine-turned spokes is fitted and finishes off the competition-inspired aesthetic of the interior beautifully. 32k miles are shown on the odometer, though the actual chassis mileage is unknown. The car has been driven sparingly since the restoration was completed in 2006.

Equipped from the factory with a 1.5-liter Fuhrmann 4-cam engine, this car is now powered by a 2.0-liter 587/1 flat-four (#P97093) from a later 356 Carrera 2, which the seller sourced from Elevenparts of Geneva, Switzerland. Prior to installation, the air-cooled DOHC engine was rebuilt and dyno-tested by Alan Klingen at The Stable. It utilizes a standard-size crank along with a set of Carillo connecting rods. Fuel is delivered by a pair of rebuilt Solex 40 P11-4 carburetors from Bieker Engineering, and a later-model GS exhaust system has been installed. A pair of Perma-Tune CDIs have been added to the twin-plug ignition system. An evocative center-exist Sebring exhaust is also included with the car.

The oil tank for the dry-sump lubrication system is mounted in the left rear fender and protected by a mesh screen, which carries the chassis number. Oil coolers reside in both the driver and passenger-side front fenders just behind the horn grilles, and they are plumbed with hard lines and thermostats. A larger remote filter has also been added. In addition to the higher-horsepower 2.0-liter engine, a 741 gearbox with BBAC gearing was built with a torque-biasing limited-slip differential sourced from Vic Skirmants’s 356 Enterprises, as well as a heavy-duty steel intermediate plate.

The car is equipped with a center-fill 80-liter touring tank, and the modules for the HID lights can be seen mounted on each of the inner fender panels. The electrical system has been converted to 12-volts and features an Optima battery. The included Porsche Certificate of Authenticity and Kardex confirm the car’s original configuration. The car has participated in five 356 Club shows, and it won a first place award at each. Records and receipts from the restoration are also included with the sale, as is a substantial cache of spare parts, including the original seats, original glass windows and window regulators, rear seat, Sebring exhaust, and a vintage performance exhaust complete with glass pack.

The car runs and drives well and carries with it a sense of occasion that differentiates it from the standard 356. The car has separate ignition switches for each coil, which operate independently of the starter. This allows the driver to crank the engine without spark in order to build oil pressure, much as one would do in a race car. The engine is tractable and very civilized. It carburetes well, with linear power which is delivered in a streetable and fuss-free manner. The gearbox works well, as do the brakes, which operate symmetrically and require a healthy shove from the driver. The chassis, steering, and suspension have a sporting directness that makes the car an absolute joy to drive and underscores why these cars were so successful in endurance racing.

This is an exceptional opportunity to acquire a wonderfully usable 356A Carrera. Rather than being hyperbolically concerned with originality, this car was built with a fantastic “sports purpose” vision that gives it a fantastic presence and a sense of occasion that makes it stand out, even in the most distinguished 356 company. 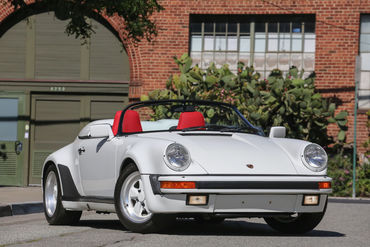 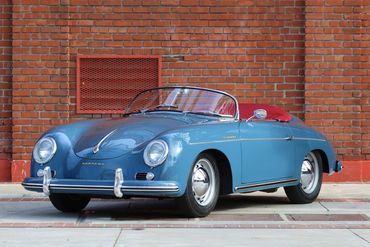