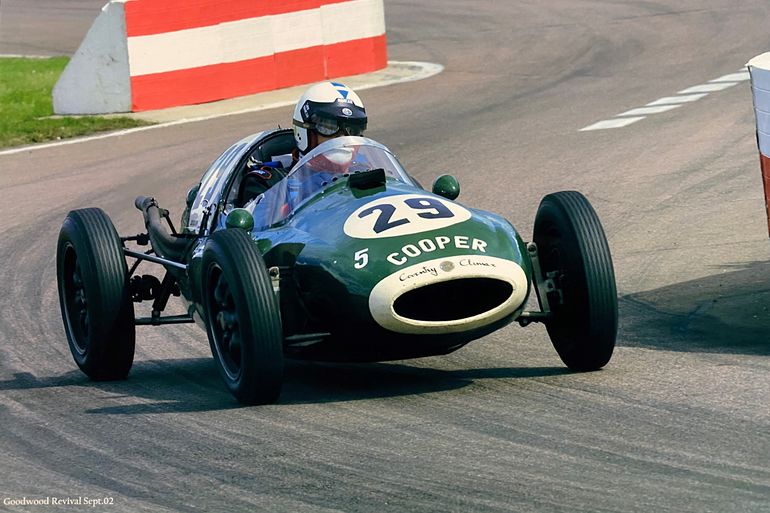 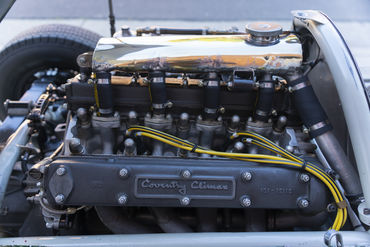 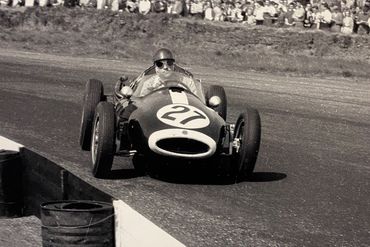 Period race history includes French, Italian, and German Formula 1 races with Gibson, Burgess, and Drogo. Formula 2 history with Salvadori and Flockhart, among others. Fastidiously documented and understood to be among the most original T43s extant. Ideal for competition at Goodwood and beyond.

Founded by father and son Charles and John Cooper, and joined by boyhood friend Eric Brandon, the first Cooper race cars were assembled in the family garage in Surrey, England just after the second world war. Though early cars were powered by smaller displacement engines, the team entered the 1950s with a great deal of knowledge building efficient single seater race cars that relied on agile suspension and clever packaging of engine, driver, and lightweight components. By 1955, their innovative placement of the engine at the rear of the car became a signature feature. This engineering advance gave the car surprising stability and performance even with less horsepower. So much so that by 1957 it gained the attention of nearly all race car manufacturers when Jack Brabham took 6th place at the Monaco Grand Prix, followed by Stirling Moss’ win at the 1958 Argentine Grand Prix, both piloting a T43 Cooper.

The lightweight, rear engine T43 was built to run both in Formula 1 and Formula competition. The rear engine platform allowed for a lower seating position for the driver which not only delivered far better weight distribution for cornering, it also made for a much lower frontal cross section. The Climax 1500 cc engine was chosen for the power to weight offered in the light package and ease of access when positioned behind the driver. Competing handily against the more powerful Ferrari and Maserati offerings of the era, the nimble Climax powered Cooper not only proved that David could beat Goliath, the T43 changed everything about how nearly all future race cars were designed and engineered. Cooper cars would go on to win consecutive world championships in 1959 and 1960 and greatly influence race car packaging and design for decades to come.

This example, serial number F2-26-57, has been recognized by multiple authorities as one of the most original T43 Coopers in existence today. Copiously documented over many years of research and expert evaluation, this Cooper is the subject of citations by author Doug Nye in “Cooper Cars” and other premier Cooper and Grand Prix expert sources, validating the provenance of this rare and important car. In addition to the rarity and originality of this T43, from 1957-1960 F2-26-57 competed in four F1/F2 Grand Prix races and completed four full seasons of Formula 2 racing. During these four years, drivers of this car included Roy Salvadori, Piero Drogo, Ian Burgess, Wolfgang von Trips, Ron Flockhart, Dick Gibson, Jack Fairman, Wolfgang Seidel, and Edgar Barth. Grand Prix races include:

In addition to these races, in 1958 Ian Burgess won the Vanwall Trophy and in 1959 Roy Salvadori won the London Trophy driving this Cooper T43. A list of 34 races from this four-year period has been documented with drivers, car number, and race results. Additional source materials included with the car offer individual race records citing participation from this car.

After the car competed in the last series of races in 1960, it remained unmodified, undamaged, and complete throughout a known chain of ownership. Typical of many race cars of this period, the engine originally fitted in 1957 was replaced that same year with the engine bearing number FPF/430/3/1021, which remains in the car today.

According to the history of ownership compiled by previous owners, F2-26-57 was purchased in August 1957 directly from Cooper by C. Tommy Atkins. At the end of the 1957 season, ownership is next attributed to Alf Francis who, as an engineer and mechanic, modified the rear suspension in keeping with the modifications performed on Sterling Moss’ 1958 Argentine Grand Prix car, now housed in the Collier Collection, Florida. Murray Smith purchased F2-26-57 from Francis in a deal involving two cars with spares from a car known as the Walker Special. It is believed that this purchase occurred in or around the mid 1980s.

Possibly related to the Walker Special, a second car, a Cooper T45/51, was at some point, assigned the number F2-26a-57. Uncertainty surrounding the origin of assignment attributed to 26a aside, it nevertheless remains in existence today, but should not be confused with the factory designated, in-sequence chassis assignment for F2-26-57, as well as the victories and participations associated with this chassis in period races. Further, according to expert Doug Nye and factory chassis records, there is no factory documentation supporting the existence of any “a”-designated chassis numbers in the entire production sequence of F2-57 series T43 cars. The standard numeric order is in keeping with Cooper chassis numbers for this series of cars and consistent with chassis attribution to F2-26-57.

After the car was sold in the 1980s, it was then sold to Bob Rubin who subsequently sold it to Neil Twyman who shared restoration and driving duties with Joe Twyman including their contemporary participation at Goodwood. The car arrived in the US in the early 2000s where it was sold by Cavallo Motorsports, CA. Since that time, F2-26-57 has remained under US ownership.

The current owner has enjoyed the car since 2018 including regular trackside preparation and services for various events. Work performed on the car in 2018 included new brake lines, new U joints, fire bottle service, fluids, filters, and hydraulic service. In 2019 the gearbox was removed and rebuilt including a new top shaft and a new 9:31 ring and pinion. In 2020, under the services of Phil Reilly and Co, the car received a fire bottle service, brake and clutch fluids, clutch arm and slave system reviewed with service to the motor plates and transmission block, brakes removed and serviced, and a small crack in the tube chassis v’eed out, braised and repaired. Services with Reilly continued in 2021 totaling over $13,000.00 including the installation of new gearbox gears and the construction of a specially machined splined input shaft to improve operation.

In addition to the documents supporting the car, this Cooper T43 is accompanied by previously issued FIA papers with the chassis number identification of F2-26-57. The logbook accompanying the car, also bearing the same chassis number indicates vintage race events from 2011 with the last race logged at the Monterey Historics in August 2020. Throughout the course of current and previous ownership every effort has been made to ensure this Cooper retains the utmost care and proper operational features for future motorsports enthusiasts to enjoy. The car displays exceptional historical merit, copiously researched racing provenance, with impeccable ownership and preservation rarely found in race cars of this period.

Today this rare and important Cooper T43 presents a captivating, distinct, and innovative profile enhanced by traditional British Racing Green paint of high gloss and very good visual quality. While the exterior finish in keeping with cosmetics typically found in enjoyably used race cars, the overall visual impact is impressive in every respect. The paintwork displays no major flaws, though exhibits signs of racing duty as marks of pride gently dapple the alloy body skin. The body color is perfectly suited to the low-slung racing profile particularly in the aerodynamically conceived front section, dropped driver position, and rear engine design. The painted cast wheels reveal the finned brake drums through slotted segments, capped by Cooper center caps. The rear of the body tapers to a beautifully sculpted and tightly contoured tail making a superbly shaped cowl over the engine and gearbox. With the front section removed, the beautifully constructed fuel cell, suspension, and tightly packed mechanicals are further evidence of the genius of these early rear engine cars. Throughout the construction, mechanical alloy details and features convey construction very much in keeping with vintage aircraft of the era.

In addition to the amazing construction and history of this Cooper, this exceptional example retains the original Cooper chassis tag which is riveted to the main frame and bears the 26/57 designation as it originally left the factory. Of further note, the engine bears the correct series stamping FPF 430-3 1021, and one of the main frame tubes has been signed by famed Cooper driver Jack Brabham.

The interior is all business, evoking aviation themed cockpits with mechanical controls immediately on hand, raw aluminum, and spartan features all in the name of weight savings. The matching green steering wheel, brown leather seat, critical instrumentation and a five-point racing harness convey an authentic and confident presence allowing for just the right levels of modern safety upgrades to suit vintage racing. The interior displays a unified presence that has been carefully prepared in harmony with the exterior appearance. When seated inside the car, one is immediately aware of how perfectly balanced and compact this car truly is. A capable driver will feel as though they are wearing it as an extension of their courage when at speed. Everything about this magnificently conceived Cooper T43 is confirmation of the historic import these cars deserved upon conception and the races this rare example participated in both in period competition and more recent vintage events.

The engine compartment hinges open at the rear to reveal the Climax 1500cc engine resplendent with purposeful integrity, honest finishes, and professional preparation. Evidence of clever space saving engineering and mechanical invention are at every corner. The alloy formed hood panels can be easily removed to enjoy the quality of the original build, while the overall visual representation can be appreciated for both the original design, the preservation-centric services performed under careful past ownership, and the recent exceptional mechanical attention performed by experts at Phil Reilly and Co. The underside of the car is consistent with the visual representations of the entire car. Smartly constructed with weight savings in mind, there is no evidence of structural compromise, only typical areas of modest but careful use as one might expect from a race car participating in enjoyable motorsports events. An assortment of various small parts is included with the car as are several vintage photographs showing the car at various races, photos of various service and refurbishment details, and copies of documents supporting the history and racing entries and victories associated with this Cooper.

This is a truly rare opportunity to acquire a rare and important Cooper T43. Given the documentation, previously issued FIA papers, recent services, proven mechanicals, and historic provenance, it would be difficult to find another example of such fine distinction in private hands. Sitting in the very cockpit where racing legends Roy Salvadori and Piero Drogo once commanded this car to victories, the ground-breaking engineering, innovative engine placement, and professional care deliver a stunning statement of Grand Prix excitement from the golden era of Formula 1 and 2 racing. Cooper T43 F2-26-57 is ready for the next proud owner to continue the lineage of proud stewardship and ongoing participation where it is sure to be welcomed into any top-tier concours or vintage racing event.

While avaiable, this car is currently not located in our showroom, but could be inspected by appointment in the South Eastern United States. 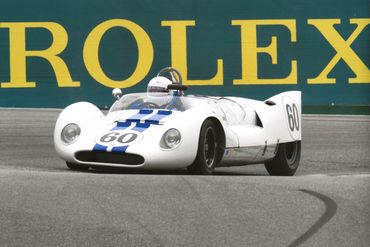