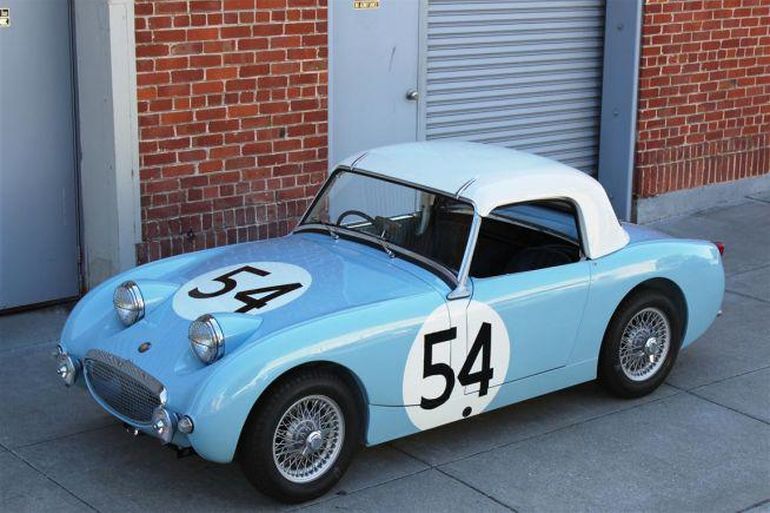 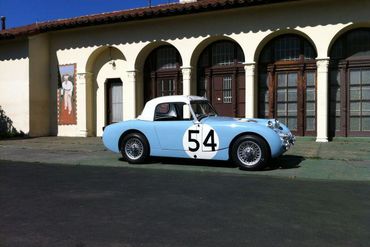 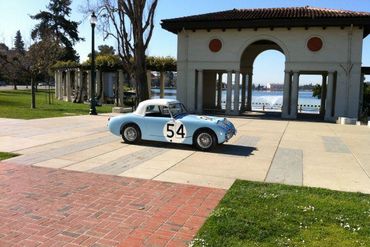 The Factory Built and 1959 12 Hours of Sebring Class Winning Sprite of Stiles/Sutherland.

Announced to the press in Monte Carlo by the British Motor Corporation (BMC) on 20 May 1958, just before that year's Monaco Grand Prix, the Austin Healey “Bugeye” Sprite became an instant success as a low cost, nimble, and lightweight sports car that \"a chap could keep in his bike shed\". Designed by the Donald Healey Motor Company, the Sprite first went on sale at a price of £669, using a mildly tuned version of the Austin A-Series engine, and as many other components from existing production models as possible, which enabled the new design to be competitive in the retail marketplace.

Having spun the car in the press as an economical entry level sports car that was dependable transportation which could be a raced on the weekends, BMC immediately prepared and entered a handful of Sprites in the top international endurances and sports car races around the world to prove that their new design provided the ultimate platform for success in the small bore production classes.

The 1959 12 hours of Sebring began the era of the racing Sprite. BMC had decided not to enter big Healeys at Sebring in 1959 because they wanted to introduce the new Sprite to America at the race. Donald and Geoff were commissioned by BMC to transform four newly released production cars into race cars that would withstand the 12 hours at Sebring. Dunlop provided experimental four wheel “light car” disc brakes and 60 spoke 13 inch wire wheels for the four cars, the factory competition department provided a XSP race motors and Jensen provided hardtops. According to John Sprinzel in his book Spritely Years, “Geoffrey drew up a specification coded ST200 to which the cars were prepared”. In addition to the hardtop, engine, brakes and wheels, the list included SU 1 ¼ inch carburetors and special manifold, dual tubular exhaust, a close ratio transmission, reinforced a-arms, special springs and shocks, a long distance gas tank, heavy duty generator and voltage regulator, a Smiths 5 inch chronometric tachometer, and other parts. Since the Sprite was a new model, some of the race parts used had yet to be developed and the modifications completed in a very short time span. In less than three months, almost everything on these cars were changed, the deadline was met, and the Healeys provided the factory with their 1959 Sebring Team. It was shown that the cars were sent to the US on February 23, 1959 by the BMC Competition Department to Hambro, which was BMC’s North American distributor and shown as the entrant at Sebring.

Of the four cars were sent to the United States, three were campaigned at Sebring, and the forth was present at the event as a back-up car. The cars swept the podium with a 1-2-3 in the GT1.0 category, with this particular example winning the class.

Austin Healey Sprite AN5/8145, with body number BAE 7324, left the assembly line on November 24, 1958 and was dispatched to Donald Healey Motor Company on November 26, 1958. s/n AN5/8145 carried race number 54, which was expertly driven in the 12 Hours to its win by Phillip Stiles and Hugh Sutherland, therefore becoming the first Sprite to win an international endurance race. The car’s history, and originality, make it arguably the most important Sprite in existence. It is one of only two surviving cars from the Factory Team that swept the podium for the class at Sebring in 1959, and it is the only remaining car with the original parts from Sebring.

In later years there were Sprites with alloy panels and some with one off body designs that participated at Sebring and Le Mans, but even those cannot claim the same significance as the stock bodied “Bugeye” Sprites that ran for 12 hours at Sebring in 1959. The three-car finish proved the stamina of the little car in an endurance race and showed the factory’s commitment to racing. After 1959, Sprites were raced in the 4 hour race at Sebring often with famous drivers, but none of those later teams did as much to spark the interest of the buying public. That 1-2-3 finish at Sebring kicked off an advertising campaign that resulted in the sale of almost as many Sprites in 2 ½ years, than Big Healeys were sold in 14 years.

Following their Sebring success, a full range of race parts and options for the cars were developed and were available through Donald Healey Motors and through the BMC Competition Department. Those factors led amateur racers to confidently choose a Sprite over other marques and it quickly became a favorite in club racing. Sprites soon were available from the factory with a Sebring option kit that was developed from the parts used on the team cars in 1959 at Sebring.

According to the Geoffrey Healey book More Healeys, Frogeyes, Sprites and Midgets, “After the race the cars were sold to any distributor who had use for them”. The class winning number 54 Sprite went to Kjell Qvale in Northern California.

In a 1959 article written by Ocee Ritch that was reprinted in the Clymers Sprite – MG Midget Owners Handbook there was a statement mentioning that one of the cars was taken back to
Northern California by Jack Flaherty, who had raced one of the factory MGAs. Flaherty ran the BMC dealership in Monterey California for Kjell Qvale, who was the Northern California BMC distributor. The car was delivered to the Napa, California BMC dealership where it was quickly prepared for an upcoming race. A picture in Road & Track’s September 1959 issue showed the car at Laguna Seca in June 1959, driven by James Hughes, who was a team driver for Qvale. The hardtop had been removed and the number changed but the side lights, Dunlop wire wheels and right hand drive clearly identify it as the Sebring car.

The second place race number 53 car was sent to a distributor in the Midwest and was later purchased and raced by Ron Hampton in the early 1960’s. Information from Hampton to Silverstone, states that his car was destroyed while being towed to a race in Wisconsin.

The race number 55 car was driven cross country to Los Angeles after the Sebring race as documented in Ocee Ritch article and an article written by John Christy one of the team drivers and an editor for Sports Cars Illustrated. It had been purchased by Gough Industries (BMC distributors in Los Angeles). It was raced extensively in Southern California club races and vintage events until just recently. That car is still owned by Herschel Silverstone, but is missing the original Sebring equipment.

Ed Bussey, the Florida distributor, purchased the race number 78 back-up car that did not run the race. That car later ran at Daytona and other races driven by Phil Stiles who later purchased the car from Bussey. His documentation indicates that car was crashed and sold as parts to someone on the west coast of Florida, leaving s/n AN5/8145 to be the most intact of the early competition prepared Austin Healey Sprites in existence today.

Not only is this car correct in equipment, but it is also in impeccable condition, having been fully restored by Healey expert Butch Gilbert. The body is beautifully refinished and the paintwork is exceptional, complete with hand-brushed race numbers as would have been the practice in period. The rare factory hard top is equally nice. The car retains its many race-specific features, including the side marker light, external fuel filler, driving lamps, as well as the correct Lucas headlamps with protective rock guards.

The interior is also beautifully restored. The seats and door panels have been upholstered, and the correct Smiths gauges are in place, as is the oversized Smiths chronometric tachometer. The matching painted wire wheel with factory hold down has been restored, and fitted with a Dunlop L series racing tire.

The engine bay and underside are both spotless. The engine bay is correctly detailed with English electrical fittings, hand-fashioned conical intake horns, and cockpit fresh air supply, among other original details. Even a period style battery is installed.

The car runs and drives well, and has minimal use since restoration. In its current trim, it is fit to be concours shown, or displayed in a museum where is its adorable nature and competition history are sure to make it a conversation topic among racing and English car enthusiasts alike.

This chassis is exceptionally well documented, and is accompanied by a binder containing a summary of the historical significance, book references, magazine articles, ownership records, race logs between 1959-1963, vintage race logs, restoration notes, information about the specific parts, credentials, commentary on the authenticity, and a list of research materials. A beautifully bound coffee table book has been professionally created for this car, with many period race photos, before and after restoration pictures, and details on the Sebring equipment. Also included are a set of H4 SU carburetors with two Q2344 inlet manifolds, one set up for 1100cc heads, for extra Dunlop wire wheels, and original brake rotors.

Perhaps more so than any other English car of the era, the Austin Healey Bugeye Sprite evokes charming and charismatic memories of carefree college days and summer street races. This particular car could very well be the most important of all the Sprites, and will be a welcome entrant to many of the world’s most prestigious competition and concourse venues.