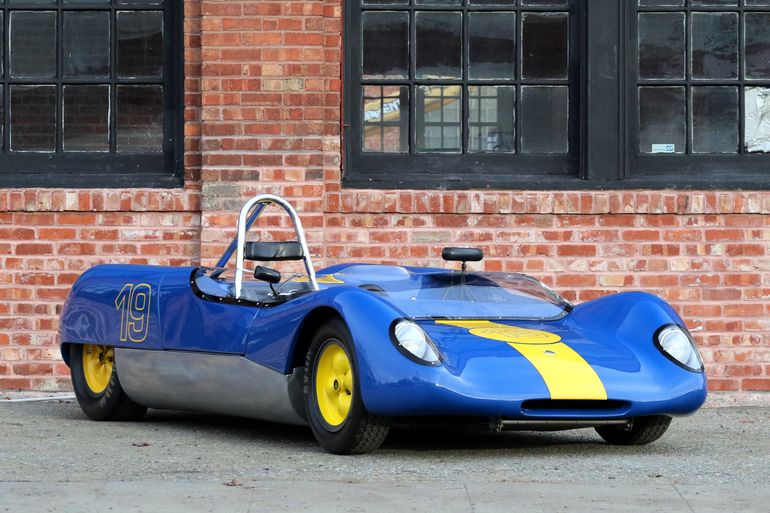 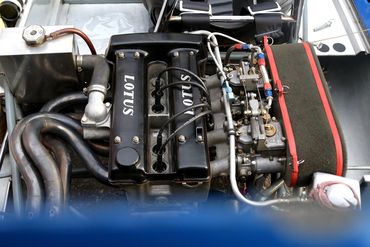 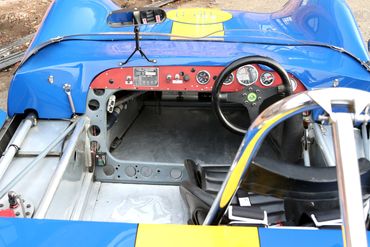 Considered by racing enthusiasts worldwide to be one of the most engaging and competitive race cars ever developed, the Lotus 23 continues its racing success not only from the past, but frequently dominating contemporary vintage events. Competing against larger and more powerful cars, the lightweight design, low profile, and robustly tuned engines, taunted Jaguars and Ferraris at competition events all over the world. At the 1962 Nurburgring 1000km, Jim Clark piloted his 23B, updated with the twin cam engine in place of the smaller Coventry Climax unit, to lead Porsches and Ferraris. His unrelenting lead, having grown to an epic 27 seconds, ended dramatically when a broken exhaust manifold poured fumes into the cockpit, forcing Clark to retire. Today with ever more prominent suppliers and advanced engine build techniques, the Lotus 23B continues to achieve wins decade after decade with consistency and passion from multi-generational competitors. The enduring Lotus legacy of timeless lightweight design, mid-engine power, efficiency, and durability assures not only their place in racing history, but as highly desirable vintage racecars that continue to participate in venues throughout the world.

This particular Lotus 23B has previously been under the ownership of respected Lotus 23B historian and enthusiast Peter Denty. Around 1989/1990, the car was sold to John Weinburg, Chicago, IL, who owned and raced it prior to selling the car to the current owner in about 1991. Over the course of nearly 30 years of current ownership, the car has participated in numerous races and logged multiple hours racing at some of the most notable racetracks as evidenced by the CSRG and HMSA logbooks, accompanying the car.

In 1992, under current ownership, Peter Denty was contacted to confirm the history behind this car. Among the voluminous documents accompanying the car, a letter signed by Denty, dated May 7, 1990, confirms his purchase of the car in 1981 referencing the unusual identification number, but confirming the history back to his specific knowledge of the car owned by Alan Brownlee in the early 1970s. Additional photos on file with the car show it at Silverstone and other racetracks in the United Kingdom, dated 1973 and 1976. Much of this documentation is critical to this particular car. As is the case with many Lotus 23Bs today, this chassis lacks an Arch Motors number stamping, but instead it is identified for many decades by a number that is out of sequence to the typical 23B series numbers. There is some conjecture regarding this chassis plate and unique number, which has been addressed by previous owners and experts including Denty. Although the origin of the current chassis number is not in sequence with the series, this number has been verified by multiple experts, and known to be with the car since the early 1970s and, as such, accurately represents and supports the majority of its racing history.

Among the copious reference materials included with the car are several hand written pages of notes tracing the previous owners back to Alan Brownlee, including a charming notation by Peter Bennett of Cheshire Classics, dated 1989 commenting on Brownlee’s ownership indicating “Stirling Moss drove this car at Silverstone (not in competition) on the full Grand Prix circuit with a time of 1.52 and gave it his ‘thumbs up’ saying that it was the nicest 23 he had driven ever.” Bennett also confirmed by letter that Denty himself had aided and advised the restoration of the car stating it was “among the best and most original Lotus 23s he’d seen” despite the lack of a typical chassis plate. Further history indicates that the car may very well have started out as a factory 23 series car, but was updated to 23B configuration, also suggested by Denty and Bennett. Further documentation poses that this car might have been a Lotus Team car which was subject to modifications performed to accommodate the 2 liter engines under development. The addition of longitudinal tubing running forward form the top trailing arm pick up points through the vertical forward tubes are unique, very likely done to improve understeer. The history of the car continues with numerous photos showing a range of livery over the history of races, a multiple page Event Summary spanning 1992-2019, results sheets, letters, and reference materials that stack up to over 10” thick when sorted for filing.

During the current period of ownership much preparation led to successful outcomes at various racetracks, with service work prepared by top tier professionals throughout the 30-year period of current ownership. In 2016 a Dave Vegher-built (Veloce Motors West) engine was installed and dyno tested yielding 194hp at 8,000 rpm, as well as additional work performed by experts at Veloce Motors West, Petaluma, CA. As the current owner has decided to retire from racing, roughly 7-9 hours have been run on the engine since the rebuild. The car was last raced at CSRG October 2019.

Today this Lotus 23B presents as a properly finished race car with mechanical integrity and exterior cosmetics professionally prepared for track use. The paint is very nicely done showing excellent gloss, vivid blue color, and a cleanly defined central yellow stripe and black detailed pin stripes, with inserted roundels, and raw aluminum rocker panels. The body panels exhibit good fit and finish throughout with very low body lines blending the clear windscreen into the integrated front and rear body surfaces. The characteristic painted yellow cast wheels are currently shod with Avon race tires. Throughout the car, evidence of detail supports the thoughtful stewardship this car has seen including clear plexiglass covered headlights, properly braced chrome plated roll bar, and recent CSRG tech stickers, all of which contribute to a very satisfying visual impression of this car.

The clean and well-presented lines and finish of the exterior continue to the interior of the car. The cockpit is tidy and properly sorted with correct instrumentation, characteristic painted gray lightened structural steel cowl hoop, and competition five-point harness with seat belts dated to June 2021. The suitably trimmed and contoured black vinyl driver’s seat is surrounded by raw aluminum central tub construction and hinge-out door panels. Instrumentation is clear and functional, again in keeping with quality racing cosmetics. Cohesively prepared and properly set up for racing, this Lotus has both the visual presence and mechanical confidence backed by decades of racing.

Raising the front section of the car, the brilliant simplicity and effectiveness of Lotus the front suspension, frame, and uprights are beautifully revealed. Interesting details include the radiator, which maintains a numbered and embossed Manchester, London manufacturers plate. Construction techniques and clever engineering verify the mantra of Lotus engineering to “add lightness”. Moving to the rear of the car, the engine and engine compartment further display satisfying cosmetics, featuring robust hardware both for competition confidence and satisfying aesthetic results. The twin cam engine breathes through twin dual throat Weber carburetors exhausting through a tuned bundle-of-snakes exhaust, exiting the rear body panel.

The car is accompanied by and extra set of wheels, dyno sheets with stats on the 2016 rebuild, records showing the most recent service and repairs, tech inspection logbooks, and an astounding file of documents, letters, and notes on the history many hundreds of pages in total.

This Lotus 23B presents an excellent opportunity to acquire a turnkey example of a nicely finished and professionally prepared racecar, ready for historic competition. Lotus racecars offer significant opportunities for enthusiasts including club events, historic racing, and a supportive technical community of like-minded enthusiasts. This Lotus 23B further represents an ideal historic entry to many premier North American events, providing years of exciting driving and enjoyable ownership for the next fortunate participant.