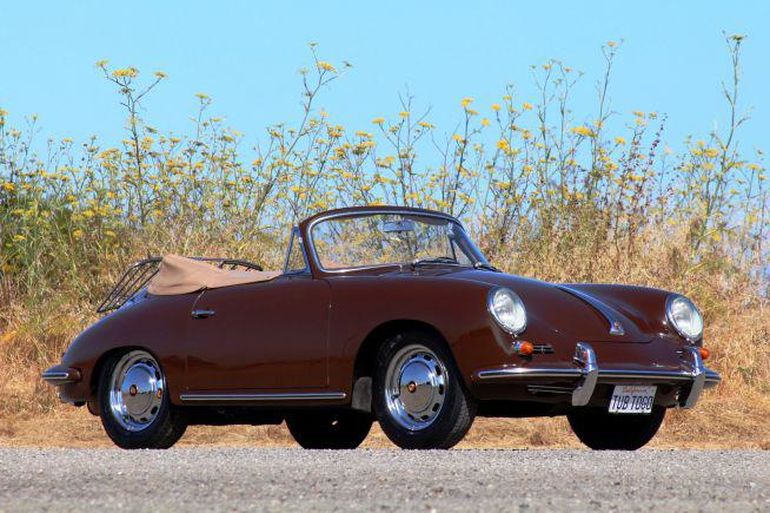 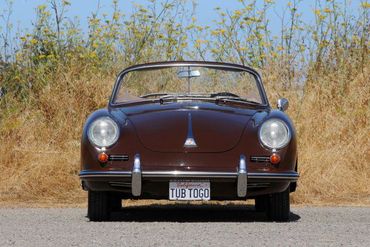 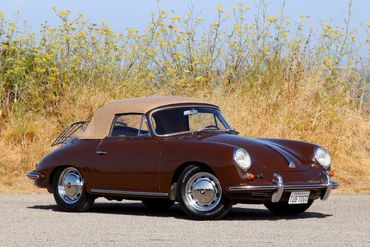 The legendary Porsche 356 remains today one of the hallmarks of sports car design. With its unique profile and race-inspired lineage, the 356 became the first Porsche to proudly bear the family name of Ferdinand Porsche. Introduced in 1948, the 356 continually evolved with cosmetic and mechanical refinements until 1965, when production yielded to the 911. During this time, engine horsepower increased from a noble 40hp to just under 100hp. The 356 “C” series cars, available in coupe or cabriolet body style became one of the most advanced offerings over the historic sixteen-year model run, featuring multiple improvements, including the addition of disc brakes.

This beautifully finished cabriolet has been documented with Porsche Certificate of Authenticity stating it was produced August 12, 1963, finished in color code 6411 “Togo Brown”, and trimmed with Fawn leather interior. This European specification car was delivered with ventilated chrome wheels and Phoenix tires to the first owner in Nürnberg, Germany. According to the Cardex (included with the sale), services were performed on the car with the last notation at 11,345 kms (7,000 miles). The next available service record indicates 51,777 in September 1969. These service records were included with the car when the current owner purchased it in 1977. Although there are no records showing service from 1964-1969, there are records from 69-77 with mileage recorded, indicating the car has resided in California since 1969.

It is very unusual to find a sports car that has been owned for decades by a knowledgeable enthusiast with hands-on experience in preservation, updates, and engineering. Over the past 40 years, the current owner has serviced this 356 regularly, retaining the original engine, which was rebuilt in 1980. Various other mechanical upgrades include the installation of a Precision Matters full flow oil filter, upgrade to electronic tachometer, and fuel pump replacement (1983). The brakes were rebuilt in 1990 and 1997 and converted to dual master cylinder, which is cleverly fed from underneath the original single reservoir with a split line to feed the two pistons. Dot 5 brake fluid has been used for the last twenty years and periodically changed to minimize corrosion. Brake lines and calipers were last replaced in the late 1990s.

The interior and top were upgraded in the 1980s but once again were replaced, this time with leather from Auto’s International for the seats, while the remaining interior trim was finished in a correct combination of leather and vinyl per original specifications. In 1988, the bodywork was started, initially focusing on the battery box and pedal cluster. At this time, the car was out of use, and subsequently was stored from 1990 – 2010. By 2012, Dave Worm had completed the bodywork, replacing the longitudinals and installing a new floor. The car was finished and painted the original Togo Brown color shortly before the new interior was installed. During the past five years the transmission was serviced and found to be in excellent condition, requiring no major work.

The car has been updated with several important electrical improvements. The owner has supplied copious notes outlining the improvements, wiring, and diagrams to reference these upgrades. The headlights have been rewired to allow Halogen H4 lights using a Joe Leoni kit (HLr Conversion). Another Leoni conversion kit adds a starter relay as well. The car has a 6 to 12 Volt converter installed under the dash, behind the radio to supply a standard 12V accessory outlet. The voltage regulator has been replaced with a Bosch full-control regulator (original retained as a spare with the car). LED lighting is installed in the instruments and tail lights, the clock has been updated to a quartz movement, and the 1965 Blaupunct radio still functions.

Today the car presents with a very nice combination of recent restoration work and thoughtful system upgrades. The paint is nicely done with high gloss and very good panel fit on the doors and deck lid (which has the matching deck lid number). The hood appears to have been replaced, but has been properly fit to the car. Some light, but uniform, paint texturing appears on the driver’s side door. The chrome and various trim throughout the car are in excellent condition, including the wheels, bumpers, and rare luggage rack. Lighting, lenses, and script are all in excellent condition. The windshield (replaced in the 1980s) and side glass are in good to very good condition with no major chips.

The interior of the car has been very handsomely restored with excellent seats trimmed in correct leather showing just a hint of use on the driver’s seat bolsters. The supporting trim for the doors, carpet, and dash are done in matching vinyl using proper fasteners and trim per original specifications. The instruments are beautiful with full color, no fading, and excellent needles. The original type steering wheel has been restored to a very nice level, giving the car a tidy vintage appearance. Many of the mechanical and electrical upgrades that make for a very capable and enjoyable driving car are concealed within the correctly restored dash. The top and top boot are in very good condition with tight fit and excellent closure to the windshield frame and around the boot area.

The engine compartment reveals a nicely restored original, numbers matching engine as it left the factory and as noted in the COA. Restored using correct finishes, decals, and appropriate hardware, the engine and engine compartment remain nicely presented even though some time has lapsed since restoration. The spare tire and storage area are in very nice condition, showing proper finishes and materials including a correct date-stamped chrome plated spare tire rim. The underside of the car is clean and very well prepared, as evidenced by the new floor, and various replacement panels installed during the body restoration. Suspension and brake components are all visually in nice condition as are recently replaced soft lines and various hardware.

Driving this car, one is reminded of the delightfully nimble steering and cornering capabilities these cars are known for. The engine starts easily and delivers all the wonderful sounds Porsche enthusiasts have come to revere, though in the case of this car, quite reliably given the mechanical upgrades. The shift linkage is good and allows for easy shifting in all gears. The engine delivers super smooth operation with virtually no vibration and reasonable power, consistent with the original specifications. The brakes and steering are slightly off center but without much play. Suspension is compliant in cornering, while road manners on the highway are smooth and pleasant either while cruising at moderate speeds or pushing just a little bit as the revs increase.

Included with the sale are the Porsche Certificate of Authenticity, the original Cardex showing mileage, dates and service, records of service dating back to the early years, a spare set of keys, a set of tools, jack, and various spare parts including some original components. The car also comes with a black hardtop, displaying an older, but serviceable finish. This handsome Porsche exhibits all the best traits of a 356 one might expect – sporting excellence, air cooled lineage, and unique design, all wrapped up in a delightful turnkey Cabriolet, ready for summer fun.