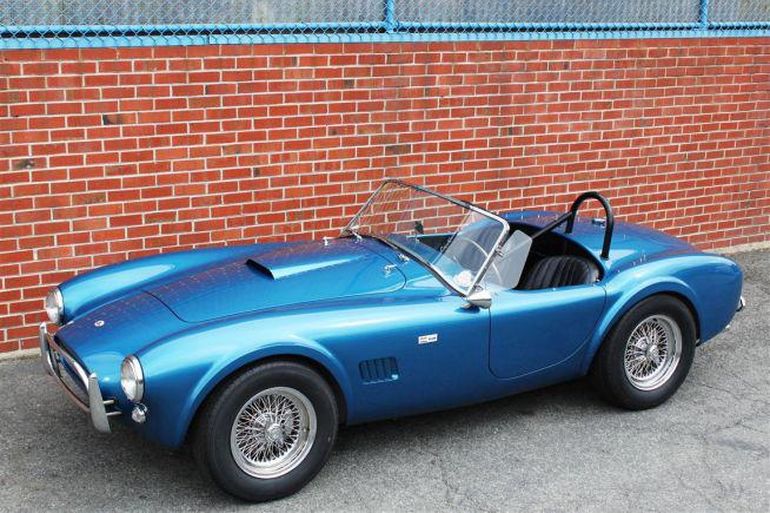 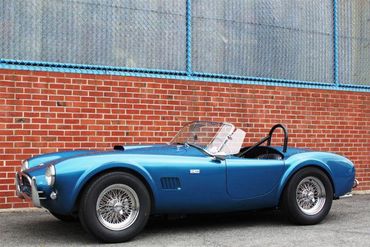 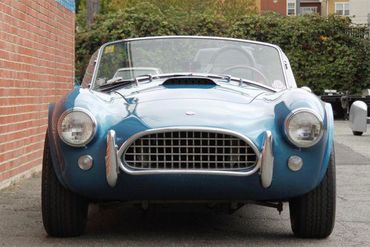 Like all Cobras, the body of this example was constructed at AC’s factory in the United Kingdom before being shipped to Shelby American for completion in April of 1964. It was finished in bright blue with red leather, and sat on chrome wire wheels. An original slab-side 289 cid, rack and pinion equipped car, and still fitted with correct to original box flairs, this particular example truly represents the ideal configuration for the discerning Cobra enthusiast.

Thanks to the Shelby American World Registry, the history of this car is known back to the late 1960s. CSX 2387 has had the existence one might imagine for a Cobra. With prior ownership that includes two college students (it was an inexpensive used car in the late 60's), an SCCA and drag racing doctor (reportedly turning a 12.24 second e.t at 111 mph as \"Doctor's Orders\") and one of the Cobra marque's most knowledgeable owners and restorers, CSX 2387 has seen it all. Fantasy Junction has been familiar with this example since 1983, when we first sold it to a noted Shelby enthusiast. With its last two owners since 1985, the car has seen extensive touring service on no fewer than 18 annual \"Cobra 1000\" runs including one in Switzerland, Northern Italy and Southeastern France in 2008. The current owners purchased CSX 2387 in 1996 and undertook its first full restoration in 2001. The car was stripped to its bare chassis which was then sleeved and powder coated by Ron Butler. Andy Palmer repaired where necessary and rewrapped the skin and applied the paint, which was turned from red to guardsman blue. The black interior showing the right patina for a driven car was retained. Currently the car carries a fresh date code correct HiPo 5-bolt 289 engine installed in the spring of 2012, a fuel cell from Fuel Safe in 2005 and a Top Loader transmission which was refreshed in 2011.

The car presents beautifully today, with a uniform, light patina. The body and paintwork is exceptional, but it is not without a few rock chips on the frontal facing areas. Serial number stampings are present on the door hinges, hood, and truck latches confirmed the original integrity of this 289. The brightwork is also exceptional throughout, including the wheels which are spotless. The interior leather has light creasing in keeping with a well exercised car, but is free of any major flaws, as is the balance of the upholstery and carpets. Correct Stewart Warner gauges adorn the dash, and the car retains the correct dished, wood rimmed steering wheel. The engine bay is absolutely sparkling, and correct on many details. Similarly, the underside is highly detailed and representative of a professionally restored and well cared for car. CSX 2387 has clearly been the subject of an exceedingly high quality restoration effort, and respectfully enjoyed on the road since.

The car comes with its original spline drive wire wheels (mounted with new Avon tires), and four PSE spline drive FIA aluminum wheels in boxes. The kit includes one spare original wire wheel, an AC Ace spare wire wheel for space savings in the trunk, a white top and bows, a quart of the guardsman blue paint, a 289 owner’s manual, a knock-off hammer, and two car covers. Also included are copies of its original build and shipping invoices, and originals of its major restoration invoices.

This is an excellent opportunity to acquire a beautifully restored and highly usable example of one of the most iconic cars of all time. The rack and pinion, 289cid examples have enjoyed considerable appreciation in recent years, and thanks to their more refined proportions and more pleasant driving characteristics, many enthusiasts prefer them to the 427cid cars. This particular example is perfectly situated to be enjoyed enthusiastically on the road, and now after 29 years, Fantasy Junction is pleased to once again offer CSX 2387 for sale to its next custodian.