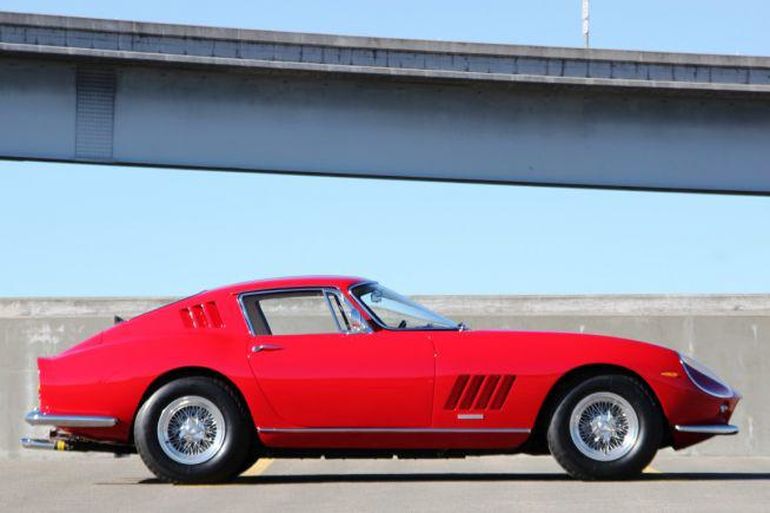 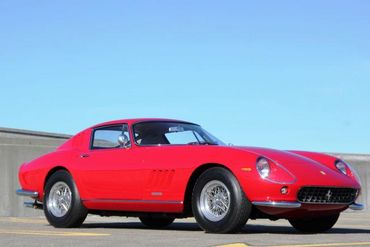 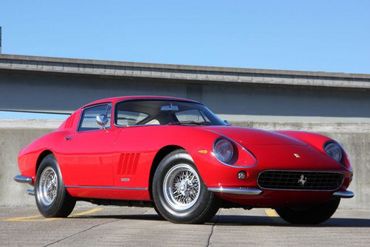 Introduced at the 1964 Paris Auto Show, the 275 GTB represented significant advances over the 250 GT Lusso that it replaced. The styling was more exciting and rakish, and mechanically, the cars were much more sophisticated. Independent suspension was fitted all around for the first time on a road-going Ferrari, and a 5-speed gearbox was also included in the specification. The transmission was mounted at the rear of the car for improved weight distribution in a transaxle. These features combined with the larger and more powerful 3.3 liter engine meant that the 275 GTB was a markedly faster and more capable car than any other mainstream roadgoing Ferrari before it. That it was and remains achingly beautiful is further icing on the cake.

The car has known history for its entire life, and was originally red with black interior. The car was sold new to David Brambaugh, son of movie star Dena Merrill. He was killed in 1966 in a racing boat accident, and the car sat until 1972 when it was purchased by its second owner, Ted Waibel, who kept the car until August of 2000. Over the years, the owner collected parts for the restoration, which was started in earnest in the 1990s and was completed in 1999. The restoration was extremely comprehensive and was completed to show standards. The car’s presentation remains extremely fresh today, with the appearance of a restoration completed much more recently. In July of 2000, Waibel showed the car at the Ferrari Club of America National Concours where the car achieved silver in Class 3. Following his ownership, the car has been carefully maintained and has passed through the hands of several collectors in the United States. In July of 2014, the car received a new drive shaft and driveshaft bearing, along with gearbox oil change.

The restoration was to the highest standards with excellent attention to detail and correctness. Despite having been completed some years ago, the car presents extremely freshly and its appearance is consistent with that of a car restored approximately five years ago. The body is straight with excellent panel fit throughout. The paintwork is of extremely high quality, looks fresh, and shows very few imperfections. The chrome was renewed during the restoration and is excellent, with light wear and aging only. The lights and glass are excellent and the car is equipped with Carello H4 headlamps. The car sits on very nice Borrani wire wheels with correct curved ear spinners and with Michelin XWX tires (non-70 series), which show some cracking in the sidewalls.

The interior has been finished to equally high standards as the exterior. The leather is in excellent shape overall, with minor wear on the driver’s seat bolster but no other blemishes of significance. The dash upholstery and other vinyl trim are excellent, including the headliner, parcel shelf, and roof pillars. The dashboard is excellen with correct semi-gloss finish to the wood, as well as excellent switches, controls, and instruments. The carpets are high quality and are excellent as well. The wood-rimmed steering wheel has been beautifully restored and remains in as-new condition.

The engine bay was correctly and comprehensively restored to show levels, including factory yellow fuel lines, Cheney hose clamps, window washer bag, and Magnetti Marelli battery with hold down. Today it shows minor soiling and aging from use, but overall, it remains attractive and impressively clean and correct in its presentation. The trunk has been restored with red attractive wool carpeting and the spare is a Borrani wire wheel with unused XWX tire.

Also of note is that although currently titled as a 1966, s/n 7633 is actually a 1965 year of production and is therefore eligible to compete in the 1960-1965 FIA classification, where it will be among the more competitive cars in its class. Additionally, the Ferrari Shell Historic Challenge now invites 275 GTBs to compete in their very exclusive racing events, opening yet another venue for this fantastic car. With the car come both the user’s manual and spare parts book, Borrani spare wire wheel with Michelin XWX, and tool roll with tools, and jack bag with jack. Together, these highly sought after items could bring as much as $30,000 on the open market, and add tremendous value when accompanying the car.

With just 250 short nose examples built, the 275 GTB is considerably rarer than other desirable Ferraris including the Lusso (350 examples built) and the Daytona (over 1200 examples built). Certainly among the most beautiful Ferrari road cars ever, 275s have enjoyed tremendous appreciation, and this is an an outstanding example of these very significant Ferrari road cars. This particular car has has good history, is extremely complete with desirable extras, and has been beautifully restored.

Single Family Ownership with Just 10,895 Miles From New. A Time-Warp Preservation Candidate to Show or Enjoy,... 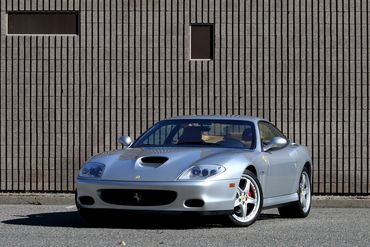