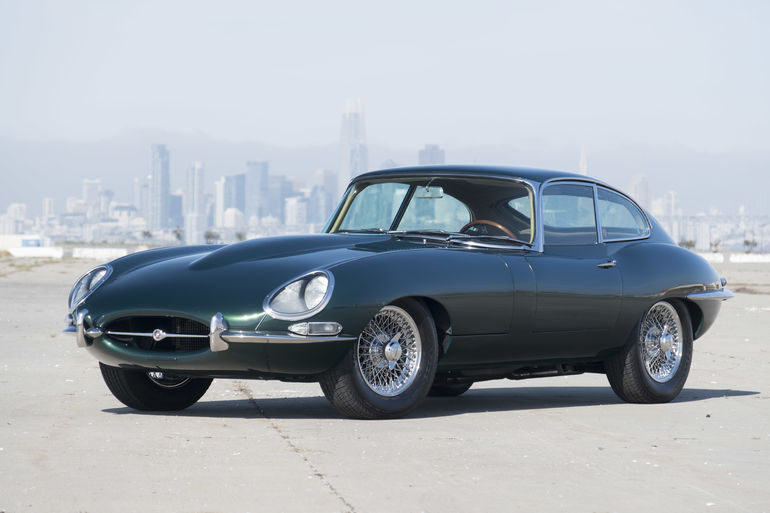 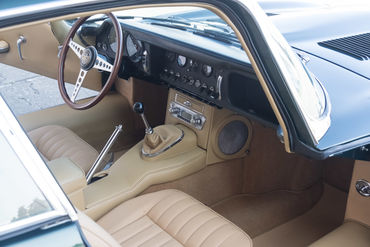 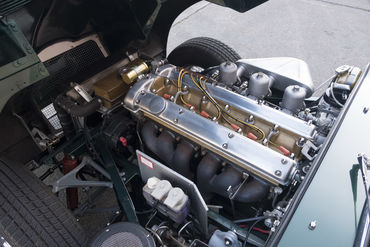 To Be Auction in April of 2021 on BaT: Beautifully Restored E-Type with Matching Numbers

Unveiled at the 1961 Geneva Motor Show, the Jaguar E-type changed everything in the sports car world. Stunning design, unrivaled performance, and racing lineage made the E-Type an immediate sensation. With its beautiful lines and surprisingly affordable price, the E-Type grew to iconic status where it has remained for more than half a century adored by collectors and enthusiasts. Independent front and rear suspension, disc brakes all around (inboard at the rear to reduce unsprung weight), and Jaguar’s legendary twin-cam inline six-cylinder engine were just part of the allure. Sales were brisk with continuous development growing in both American and European markets. Continuing sales would advance into the 1970s, but enthusiasts still remain steadfast regarding their admiration for the Series 1 models as one of the most beautiful and capable sports cars ever conceived.

The current owner purchased this car in 2008 and began a three-year restoration with a focus on building a driver’s car that would reflect original appearance but host important upgrades. During the restoration, the body was stripped of mechanical systems, glass, and interior trim. A few areas of corrosion were noted during body preparation, which were treated and welded, primed, and painted. No indication of collision damage was noted during the renovation. The exterior and engine compartment were resprayed with a modern Jaguar color similar to original dark Opalescent Green. Stainless-steel bumpers and overriders replaced the corroded steel OE units. In 2016, the interior was completely refitted with new bolsters, Biscuit leather seat coverings, and finished with Biscuit trim, new headliner and wool carpets. Three-point tan seat belts were installed in 2020. The original steering wheel was replaced with a new 16” original-style wheel. All gauges are functional, including a recently rebuilt clock nested in the tachometer.
Mechanical Restoration

During the restoration, the entire drivetrain was removed from the car. The gearbox and differential were drained, inspected, and refilled with Redline synthetic lubricants. The engine was cleaned, expansion plugs replaced, and repainted. The sump was removed and cleaned. The main and rod bearing clearances were checked and found to be within tolerances, so the engine only required refreshing. A new clutch plate, disc, and throw-out bearing was fitted. New timing chains and tensioners were also fitted. A 2-inch stainless-steel exhaust system from Classicfabs in Scotland was fitted. A one-wire Delco alternator replaced the OE Lucas unit. Valvoline VR-1 20-50 weight motor oil has been used exclusively during the current owner’s stewardship. Upgrades included stainless-steel tubing for all fuel, brake, and coolant systems, a front caliper upgrade, chrome finish and stainless-steel spoked wheels, electric coolant fan, and new three-point safety belts. The fuel tank was removed and cleaned, and the interior and exterior coated with POR products. A new electronic SU fuel pump, new filter element, and level sending unit were installed. All flexible fuel lines were replaced with ethanol-tolerant hoses.

Addressing the cooling system, the original radiator was re-cored with an extra row added to improve cooling. A pressurized Series II catch tank was added to the system to recover coolant expansion. Coolant piping was replaced with stainless-steel tubing throughout, and flexible hoses were replaced with black silicone, fabricated to replicate the appearance of the fabric-wrapped hoses of the era. A new Revo-Tech puller-type electric fan with an adjustable temperature switch was also installed.

A new clutch master cylinder and slave cylinder were installed with a stainless-steel hard line, and a stainless-steel braided flex hose. The brake system was rebuilt with new stainless steel hard lines throughout and included a new master cylinder and servo. Front and rear rotors were replaced with OE or Brembo discs. The OE front calipers were replaced with new Wilwood 128-1628 four-piston alloy calipers, with safety-wired adapters. The OE 2.125” front Dunlop brake cylinders were rebuilt by Apple Hydraulics and were then used to replace the smaller OE Dunlop rear calipers in order to maintain the braking balance of the original system. The former OE front calipers are included with the spares. Flexible brake hoses were replaced with stainless-steel braided hoses. Both brake and clutch fluids were replaced with DOT 5, an important improvement over the original hygroscopic brake and clutch system fluids. A remote bleeder system was installed on the rear calipers for easy access for bleeding of the inboard rear brakes from the left rear inner fender.

A new battery was installed in 2021. The coolant system refilled with a 50/50 mix of Sierra brand non-toxic antifreeze and distilled water in 2021. Nitrophyl floats were installed during a 2020 rebuild of the SU HD8s. In 2020, the valve lash was set to 0.004” and 0.006” specifications, the timing chain adjusted, and valve stem seals added to the intake valves. A new water pump was installed, and a spin-on oil filter adapter was added.

The overall exterior condition boasts high gloss paint with a deep finish with a more modern pigment and metallic than originally specified. The finish shows typical areas of use including a few chips and minor stress cracks, but these are notable only upon close inspection. The lighting, lenses, and glass appear very clean and preserved throughout. The body integrity is solid overall, with good panel gaps on the hatch, and bonnet, while corner areas of the doors appear generally tight to the bodylines. The chrome window surrounds are in good original condition overall with light pitting in a few areas. The front and rear bumpers are very nice, having been replaced with new stainless-steel bumpers and overriders. The chrome wire wheels feature stainless-steel spokes are in excellent condition.

The biscuit leather interior is clean and taut with correct piping and tidy seams. Carpet and floor mats are in good condition. The black dash pad is properly contoured, and the very nicely finished instruments, switches, and other features of the interior all appear to be consistent and preserved. The interior door panels, matching covered door sills, headliner, and rear hatch area are consistent in finish and texture. The seats are comfortable and firm, having been reupholstered with fresh foam. The interior conveys an honest and harmonious look and feel very much in keeping with original specifications.

The engine compartment is correct in appearance and properly detailed as part of the recent engine refresh. The correct carburetors, complete factory air cleaner assembly, and air filter box are original, correct, and properly fit. Further components, hoses, clamps, and various hardware appear to have also been installed and detailed with originality in mind. The undercarriage appears sound and tidy, while the overall integrity of the body seams and joinery is good, and the suspension components appear properly prepared for driving use.


Included with the car

The car is accompanied by a Jaguar 4.2 E Type operating and service manual, a Retro-Sound radio manual, carpet remnant material for the interior, a convenient alloy knock off tool, a factory jack and storage bag, a set of rubber floor mats, a set of clamp-on style side view mirrors, a set of OE Dunlop brake calipers with rebuilt 1.75” cylinders, and various spare mechanical and electrical parts.