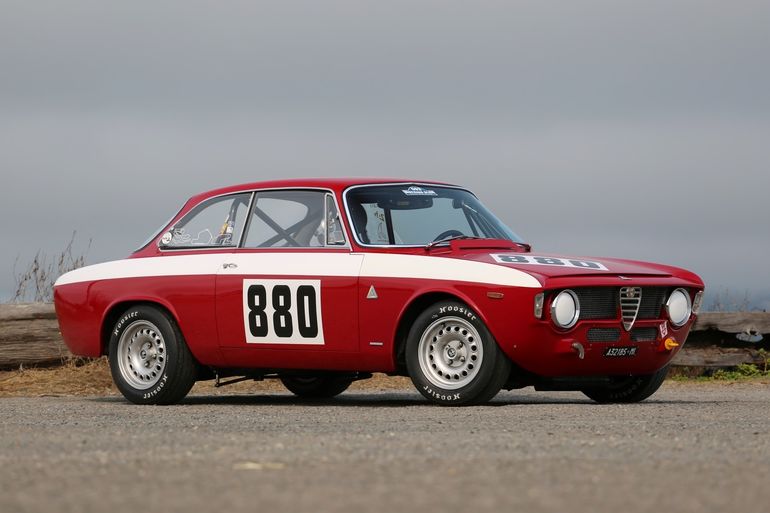 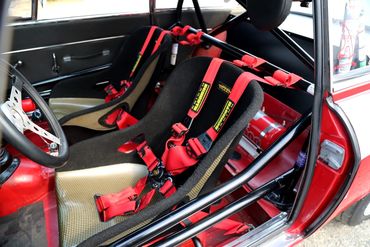 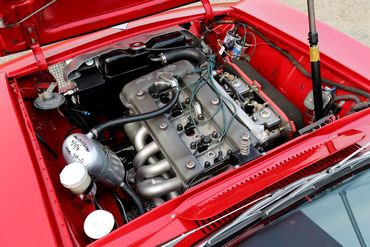 ***While not physically located at Fantasy Junction, this Alfa Romeo GTA remains available, and can be viewed by appointment.

Introduced in February of 1965, the Alfa Romeo GTA rightfully earned high praise in period and has since become a legendary part of motorsports history. Although it appears visually similar to the standard Giulia GT, the GTA (Gran Tourismo Alleggerita or ‘lightened’) was significantly re-engineered, transforming the pleasant and affordable GT into a spectacular giant-beating racecar. The race version GTA engines were built by Autodelta, a racing preparation house founded by two former Ferrari employees who had quit during the famous “palace revolt” which also enabled Bizzarrini, ATS, and Lamborghini’s successes. All Stradales were assembled at the Arese’s Alfa Romeo factory. Alfa Romeo, having purchased Autodelta in 1964, relocated Autodelta to Alfa Romeo’s Milan facility where all GTA series cars were constructed.

The GTA was developed as a purpose-built homologation special with an unyielding focus on weight reduction, resulting in a 450 pound reduction over the standard GT, bringing the dry weight to a mere 1640 pounds. To accomplish this reduction, the inner steel section was fabricated using thinner gauge steel. The inner and outer panels were bonded and pop riveted together in final assembly. The hood, doors, and trunk lid were fabricated in alloy, and the roof made of Peraluman 25, an alloy consisting of aluminum, magnesium, manganese, copper, and zinc. Alloy was used extensively in the structure as well, including inner rear support, parcel shelf support, dashboard, and rear seat support. Lightweight magnesium wheels were fit to all GTAs. Sound deadening was removed and Perspex side windows fitted. Even the window winders and lightened exterior door handles were redesigned and specially constructed. Bucket seats were also fitted and more minimal rear seats included in the Stradale or street version. 501 GTA models were built in 1965. Another 130 were produced in 1966 and about 30 in 1967. Production for the Stradale (street version) however would continue into 1975.

The resulting car was extremely capable. Even without mechanical changes, the car accelerated and stopped with significant improvement over the standard GT. But Alfa and Autodelta did not stop there. The GTA was mechanically upgraded as well, with specification varying based on the car’s primary purpose. All GTAs were fitted with a twin plug cylinder head with significant headwork to improve flow, larger oil sump, oil cooler, high compression pistons, hotter cams, and then precisely balanced. Each GTA engine was built by a single technician at the Autodelta facility and tested to meet strict horsepower output and specifications. The driveline was upgraded too with close ratio gearbox, sliding block suspension, lightweight flywheel, magnesium bell housing, limited slip differential, hollow shafts inside the gearbox, external hollowed drive shafts, and drilled gears.

From the outset, the GTA was dominant in world competition, earning a well-deserved reputation as a giant killer. On their first outing (at Monza), GTAs took the first seven places, and later won in the 6 Hours of Nurburgring. Shortly thereafter, the GTA became the first touring car to lap the Nordschleife in less than 10 minutes. Ultimately, the GTA would go on to win the driver and manufacturer championship, with further successes achieved in the United States as well, winning the SCCA Trans Am championship. The GTA would continue to advance year after year in competition, winning the European Championship a remarkable seven years in a row.

According to expert Marco Fazio of the Automobilismo Storico Alfa Romeo Centro Documentazione, this exceptionally prepared and highly refined GTA was manufactured on January 24, 1967 and sold January 25, 1967. Finished originally in red with black interior, the car was sold to the first owner in Venezuela, where it remained for over 35 years, reportedly with a single owner named Antonio Rafael Yanes Lima. An Alfa Romeo collector in Southern California purchased and imported the car in 2004, keeping it for approximately a year before selling it via Fantasy Junction to well-known enthusiast Harley Cluxton III. Cluxton maintained the car for several years, preparing it for vintage events, and sold it to the current owner in 2015, again via Fantasy Junction.

During its time in the United States, the car has seen extensive work, including professional rebuilds of the matching-numbers Stradale engine in 2009, transmission in 2011, and differential in 2010. This engine was dyno tested at 125hp at 7500 RPM and is included with the car, which currently has a purpose built race engine fitted. The original, matching engine was rebuilt with titanium rods, aluminum flywheel, high performance clutch cover, Crower rod bushings, and Arias pistons, just to name a few of the high quality components installed. Pierce Manifolds performed a detailed analysis of the Weber 45DCOE-14 carburetors, setting and jetting the intake for optimum performance allowing for the engine to transition best without giving away top end flow. Also during this period, The Finishing Touch, in Arizona, repainted the car.

The car’s current owner is a Northern California-based enthusiast, who enlisted Dave Vegher to build a purpose built and very focused race engine for the car, which produced 195hp on the dyno and now has 12.5 hours on it. During this period Vegher also rebuilt the currently-installed close-ratio transmission, and had suspension and bumpsteer set up by Huffacker. Premier Protective Films installed a custom clear bra on the nose, rocker panels, front and rear inner arch and wheel wells. In June, 2018, the car was tested, aligned to specifications (spec sheet included), coil spacers were fabricated and installed, setting ride height and corner weight, rear trailing arms were pulled, and Delrin front bushings fabricated and installed. The current owner has participated in several events during his ownership, including:

Today this GTA presents extremely well, having been professionally prepared for racing, properly maintained, and restored to high standards. Exhibiting a very nice combination of expert racing engineering and authentic restoration, the purposeful look and feel of this GTA cannot be overstated. The paint and body are in near show condition and certainly well above typical racecar cosmetics, showing only minor evidence that the glossy paint was completed nine years ago. The body panels are nicely finished, exhibiting very good panel fit. The magnesium wheels and tires fill out the wheel arches nicely, have very good paint, and wear Hoosier racing tires. The windscreen and side windows are in very good condition showing minimal wear and only light hazing. Tail light lenses, headlights, and various emblems are all in very good to excellent condition. Included with the car but not currently installed is a complete set of front and rear bumpers, which have been restored. In all, the exterior presentation is quite nice and offers a carefully dialed combination of original features, racing upgrades, and authentic appearance.

Under the hood, the mechanical artistry and performance capability of the twin-plug engine and supporting mechanical components is fully revealed. The components include impressive twin 45DCOE Weber carburetors, tuned exhaust, and several other unique performance features. The engine compartment is tidy and nicely prepared with reverence to authentic elements while having been thoughtfully updated for safety and durability. The suspension, frame, engine, and gearbox are all nicely restored to reveal a clean and tidy visual presentation that any performance enthusiast would be proud to display. The sparse trunk compartment is nicely finished very clean with easy access to the fuel cell. The spare tire well correctly displays the lightweight riveted construction unique to the GTA. The underside is in similarly nice condition and reveals the desirable and properly fitted Autodelta sliding block rear end, a period correct feature for racing cars, but not originally offered on Stradale versions.

The car starts and runs very well, generating a great exhaust sound at idle or when blipping the throttle. It is currently set up as a race car, with aggressive clutch, tall first gear, and a generally focused and competition-oriented driving experience. Nonetheless, the Stradale equipment is all included with the car, as detailed below.

The car comes with Marco Fazio correspondence discussing the car’s provenance, as well as the old Venezuelan title in the name of Antonio Rafael Yanes Lima. Also included are records from the car’s American owners, which detail the race results the car achieved, as well as mechanical work performed over the past fourteen years, including the cosmetic and mechanical restoration and extensive race preparation.

This amazing factory built GTA offers a racing enthusiast a great opportunity to experience one of the most capable and beautiful GT competition cars ever built. With its robust twin-plug engine and innovative lightweight construction, this Alfa Romeo GTA has all the benefits of this remarkable series of rare cars combined with the best of modern vintage racing improvements and top-level performance features.

Spares included with the car:

Documentation included with the car:

* A folder of race results from current ownership starting in 2015
* Dyno sheet from 3/2016 showing 194.6 hp at 8300 RPM (motor currently installed in the car)
* Documents detailing differences of GTA from GTV
* A folder detailing engine change from 2103-2014, containing records for the engine built for previous owner, Harley Cluxton,
* A reprinted workshop manual
* A folder with 2018 Huffaker suspension notes and bump steer sheets
* A folder containing Marco Fazio report and correspondence
* The original Venezuela title and other ownership documents
* A folder on original GTA seats and their unique stitching/materials
* Documents detailing the 2009 ATL fuel cell installation with certificate
* A folder detailing the 2009 paint on the entire car
* A folder with race results from Cluxton’s ownership
* A folder documenting the 2009 engine rebuild, a 2011 transmission rebuilt by Santos, a 2010 differential rebuild, a Dyno sheet from a 2014 engine dyno run of the Stradale engine 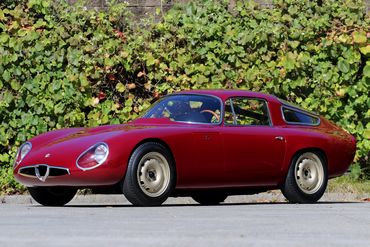